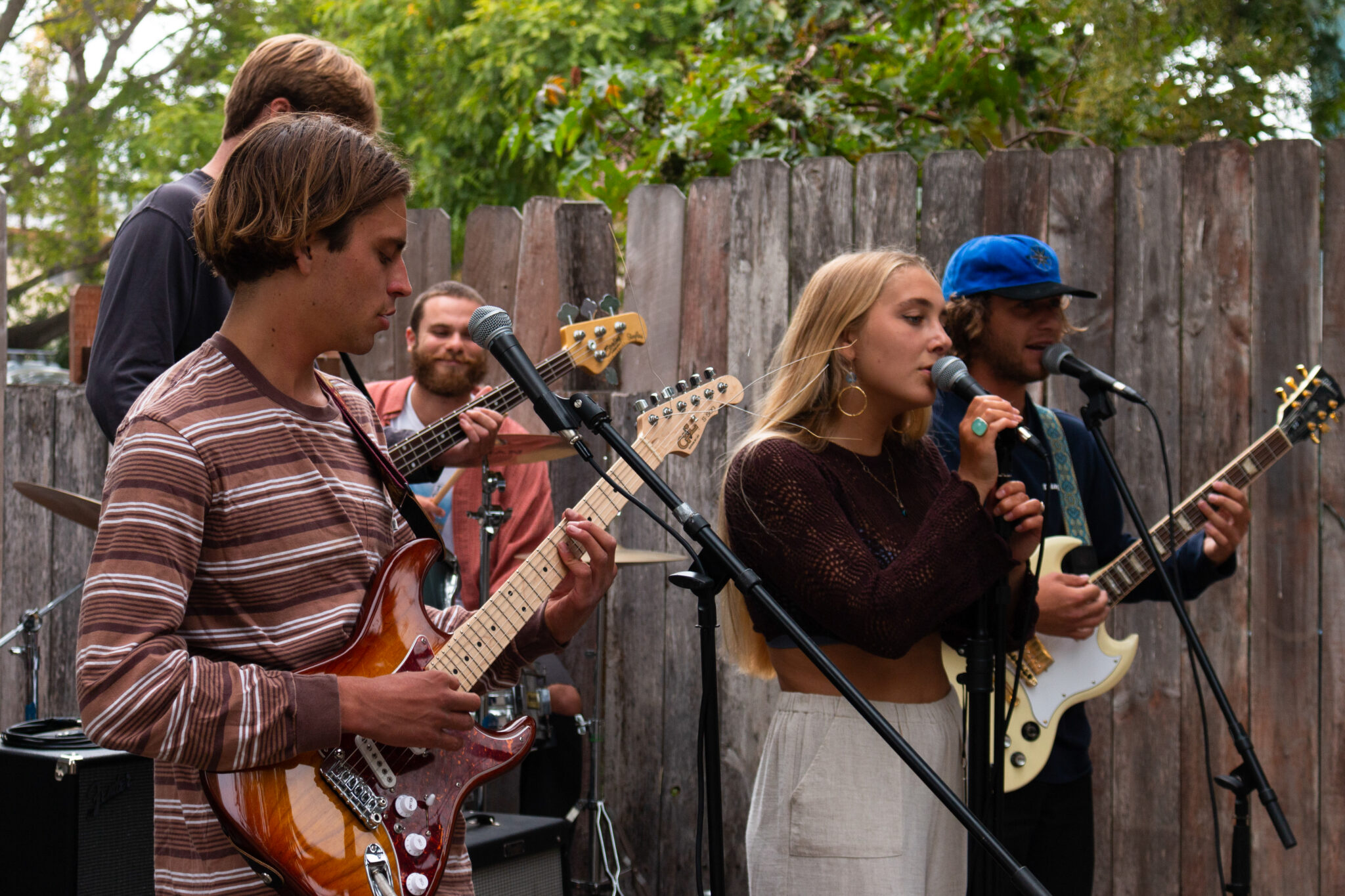 Voted “Best of I.V. Bands” last year by the Daily Nexus, Dead Set encapsulates the image of iconic rock band, the Grateful Dead, with their uniquely Americana sound rising out of packed backyards and into the Isla Vista night. Girls in white skirts and guys in tie-dye tees dot their crowds, and the barefoot fans spinning on stage capture that carefree ’70s feeling.

Dead Set vocalist and rhythm guitarist Cassidy Fragakis and drummer Gavin Mentz discussed their perspectives on the Grateful Dead and their experiences within the I.V. music scene with the Nexus. Fragakis — named after the canonical Bob Weir (the Grateful Dead founder) song “Cassidy” — was raised listening to the band, and Mentz discovered their unmistakable sound after hearing the early ’70s classic “He’s Gone.” From there, they were hooked.

The band played their first show in the Fall 2021, brought together by one of the guitarists Justin Memenas. Dead Set has since gained, lost and replaced members, but the core group has stayed the same — living up to their Grateful Dead heritage. With band members constantly cycling through, familiar faces have shifted from instrument to instrument. Fragakis, who was originally only the vocalist, now plays the guitar.

“I took over the role of rhythm guitar. I’m not really sure what it’s going to look like when [Memenas] gets back, but for right now, I am the rhythm guitar,” Fragakis said.

Some members of Dead Set are studying abroad this quarter, which has made room for new musicians to lend their own take on the band’s sound.

“[Memenas] has been the lead guitarist and now he’s been abroad for two months and we’ve had a different lead guitarist come in — his name is Jordan [Russo]— and [they] definitely [have] two different styles of playing,” Fragkis said. “Jordan has more bluesy licks to him, and Justin is way more psychedelic and loose.”

If there’s one thing to know about the Grateful Dead, it’s that their music is improvisational at its core, more akin to jazz than psychedelic rock. Three minutes of lyrics turn into 20-minute songs, solely because of Jerry Garcia’s iconic guitar lead treating your ears between choruses. Dead Set is no different. They have a general roadmap for each song, but there are moments to improvise.

“In the ethos of the Grateful Dead, we try to jam,” Mentz said.

Jamming. What the Grateful Dead does best. It’s difficult to put the Grateful Dead into a genre, but anything they do is an exploration of music itself. From rock to folk to country to blues, the Dead expands across almost all eras of music — the psychedelic and saloon country sounds being Mentz’s favorite and the Garcia ballads (“Stella Blue,” “China Doll,” “Peggy-O” and “Ripple”) being Fragakis’ favorites.

“[The Grateful Dead] have so many hands in different pockets. They play so much different stuff. And so does Jerry. And every member has their little things — it’s like a web,” Mentz said.

On the topic of Garcia and members of the band, Fragakis and Mentz had their hypothetical pick on a member to eat lunch with. Over the 11 members that cycled through the band, Fragakis chose guitarist Garcia, while Mentz opted for drummer Bill Kreutzmann.

“I would have lunch and then a guitar lesson,” Fragakis said. “That’s like the classic answer, but I think I would honestly want a guitar lesson from Jerry.”

“I would probably hang out with Billy, the drummer. I would just geek out with him about drum stuff and where his mind is. He’s crazy, he’s such a good drummer. Billy’s way cooler [than Mickey Hart],” Mentz added.

The Dead lives on in people’s perceptions of music, and when their music is replayed it reflects whoever is playing it. Fragakis spoke on this, saying, “The cool thing about the Grateful Dead music is even though it’s a cover song, each cover band has its own expression and interpretation of the music, so it’s easier to add your own flair.”

I asked Fragakis how students wanting to join a band can get involved. The answer: “If you hear music just walk in and be like ‘let’s jam.’”

“Joel [Jaffe], one of the bassists in I.V. and the original bassist for Dead Set. How he started playing is he heard [the band] Happy Medium practicing next door and he hopped the fence and was like, ‘Hey, guys, can I play bass?’” Fragakis said.

“There’s so much music happening in Isla Vista and there’s so many talented musicians that aren’t playing that should be playing,” Mentz said.

“I think anything blocking you from taking the step into playing music with other people and starting a band and playing a show — those are all mental blocks. You just have to take that step and put yourself out there a little more than what’s comfortable and you’ll figure it out. And the reward is unreal. Playing music is the best feeling I’ve ever felt,” Mentz continued.

Mentz added that once you find the group of people to play with, you should make music with love: “We’re all really good friends. I love everyone in the band so much. When you approach making music with love things get figured out and you don’t hold grudges. You do it one way or you do it another way and if it’s not your way you let it go.”

Fragakis and Mentz not only play for Dead Set, but they also write their own music.

“We’ve spoken about maybe playing as the Dead Set group but under a different name with original stuff, or mixing in original stuff to Dead stuff and that would be sick,” Mentz said.

However, it seems as though they love being in a cover band more, playing iconic songs that attract people from all generations.

“Playing in a cover band is different and exciting, because the music is really good off the bat. You don’t have to worry about it being good, you just have to play it well,” Mentz said.

And they do play it well. Their show on Oct. 15 attracted students from all over Isla Vista. People crowded the front of the stage, closing their eyes, swaying and embracing the music right alongside the band.

The Nexus asked the two band members  for suggestions for people wanting to listen to more Grateful Dead and learn more about this uniquely American experiment. They suggested live shows over studio albums — specifically, the “Veneta, OR 8/27/72: The Complete Sunshine Daydream” and “Cornell 5/8/77” shows.

“Just take the time to listen to the different shows, different albums. There’s definitely something for everyone,” Fragakis recommended.