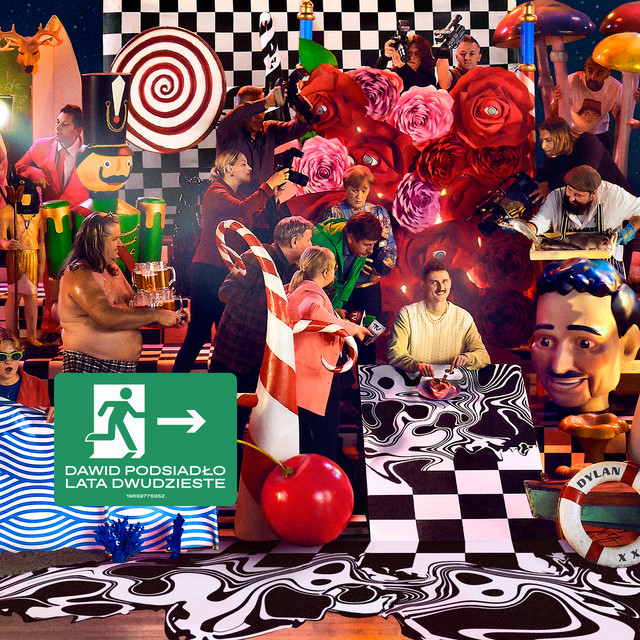 Polish pop star Dawid Podsiadło returns with his fourth studio album, “Lata Dwudzieste,” four years after his 2018 triumph, “Małomiasteczkowy,” an album that received commercial and critical success for its ability to blend experimental ideas with extremely well-assembled and written pop tunes. While “Małomiasteczkowy” was perhaps his biggest splash to date, many in Poland also remember him for earlier hits like “Trójkąty i Kwadraty,” along with his success in Poland’s 2012 season of “X-Factor,”  transforming his first place finish into an incredibly successful career both commercially and artistically.

The release of “Lata Dwudzieste,” which roughly translates to “the years of one’s 20s,” comes around seven months before Podsiadło himself turns 30. Yet the Dąbrowa Górnicza-born singer wastes no time actually reflecting on his 20s and dives straight into numerous electrifying dance-pop grooves. “WiRUS,” the album’s absolute serotonin rush of an opener, finds Podsiadło comparing himself to a virus, asking the listener to spin and dance with him while the synth and disco instrumentals in the background follow suit. The track serves as an excellent introduction into the album’s electronic kaleidoscope of synths and sounds.

“Nie lubię Cię” is another fantastic early dance-pop track that trades the instantaneous energy in “WiRUS” for a more calm, melodic introductory verse that explodes into an incredibly catchy, euphoric chorus that will be stuck in your head even if you don’t understand a word of Polish. Podsiadło’s vocals and the fantastic, dynamic instrumentation throughout the track match each other seamlessly and truly ascend the song to another level entirely.

One of the more experimental moments in the tracklist, “POST” fuses near spoken-word verses with an absolutely insane chorus, where Podsiadło is practically yelling over a disorienting beat filled with glitchy bass notes, squealing synths and flurries of backing vocals. The track is another highlight, not just for its uniqueness but also its ability to somehow make all these sounds work together with flying colors.

Throughout the tracklist, it becomes increasingly apparent that Podsiadło has not only been able to match the level of his previous masterpiece, but also somehow surpass it vocally, melodically and instrumentally. Almost every track is more vibrant, catchy and exciting than the last.

Perhaps the biggest improvements in Podsiadło’s sound are in his ballads. While they have been quite good, they were almost always the weakest points in previous works. This is not the case in “Lata Dwudzieste,” as “mori” and “millenium” are not only standouts in this tracklist, but also in Podsiadło’s entire career.

One of Podsiadło’s best vocal performances to date is showcased in “mori” as he delivers incredibly emotional lyrics about rebelling against death and wanting to make sure the one he loves would still be with him one day, should he pass at any moment. The track features few instrumentals, and the most prominent are ethereal synths throughout the chorus that provide an angelic feeling to Podsiadło’s voice. His track “millenium” features more lush instrumentals that include digital and ethereal synths that open up on the chorus to a heavy, spaced out beat. Podsiadło’s vocals again shine as he sings about waiting a millennium and defeating death just to reflect in his lover’s eyes.

Podsiadło has always excelled at writing melodies and lyrics that are a bit sarcastic and jaded, yet nevertheless honest and emotional. This continues on numerous occasions throughout this album. One example is on the track “Halo,” as he sings about using various holidays and birthdays to reach out to the one that got away, even if it is a simple “hello.” The track is incredibly catchy with the prominent guitar riffs that permeate “Halo,” and it is quite moving despite the seemingly silly concept as Podsiadło sings from the heart. You can feel his emotions through his voice, especially as he wails in the song’s outro.

The two features on this project are fantastic, with the voices of Podsiadło and Kasia Nosowska — from the famous Polish rock band Hey — blending together perfectly on the beautifully cozy-sounding “awejniak.” The lyrics, however, reveal a darker message about people needing to leave behind things — and people — they loved at the onset of Russia’s invasion of Ukraine. “O czym śnisz?” with Polish singer Zuzanna Irena Jurczak, known as sanah, has similarly gorgeous vocals from both artists as the lyrics talk about failing or giving up one’s dreams, when in reality you have all it takes to achieve them.

On the track “Blant,” the bizarre subdued vocal effects on the verses are juxtaposed fantastically with the gargantuan, flying chorus, on which you can hear Podsiadło straining his voice as he yells “gravity sucks” before the instrumental comes crashing back down to the earth. The track serves as another experimental moment on the tracklist that goes over incredibly well.

Podsiadło even sticks the landing with the closing track “Szarość i Róż,” which might be the best on the entire tracklist. Combining autotuned humming, clapping, a beautiful melody and excellent pacing, the track transitions from an already excellent song to an even greater one with a thumping trumpet outro, making the album close on as exciting a note as it started.

The only weakness of “Lata Dwudzieste” seems to be the single “To co masz Ty!” which falls a bit flat next to other tracks on the project with its comparatively uninspired beat and repetitive lyrics. Podsiadło’s fourth studio album also feels to be a bit more scattered thematically and conceptually than his third, but it makes up for this with how much every single other aspect of the album has been elevated.

“Lata Dwudzieste” is a brilliant, exciting and glorious album that improves on almost every aspect of Podsiadło’s previous work and stands as another complete triumph in his career, firmly cementing him as the current king of Polish pop.