The Daily Nexus
Sports
UCSB women’s soccer gets first win of October
October 22, 2022 at 10:24 am by Preston Espar

As the season winds down for the UC Santa Barbara women’s soccer team, their inconsistent play continues. After opening October with two winless matches, the Gauchos began a losing streak of two games with a loss at UC Davis. However, UCSB finally eked out their first win since the end of September with a victory against the UC Riverside Highlanders. 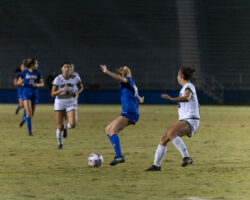 In their first game of the week, UCSB traveled south to take on the Cal State Fullerton Titans. Tired of their month of suboptimal play, the Gauchos came out aggressive at the start of the first half. Due to their continued early pressure, the Gauchos were able to find the back of the net thanks to a goal from sophomore midfielder Lauren Helwig in the 18th minute. Unfortunately for the Gauchos, the lead was short-lived as Cal State Fullerton was able to tie the game at the 32nd minute mark. At the half, the game was tied 1-1.

In the second half, the Titans came out with an aggressive form of play not seen in the first. Less than five minutes into the second half, Cal State Fullerton was able to score and take a 2-1 lead. This score did not change for the remainder of the game as the Gauchos were unable to get past the Fullerton defense again.

For their next match, UCSB traveled to Riverside to take on the Highlanders. In this match, the Gauchos had a much more dynamic offense when compared to their previous games. UCSB only had to wait for the 12th minute to open the scoring. The first goal for the Gauchos came courtesy of sophomore forward Manuri Alwis. UCSB was able to fire 2 more shots on goal in this half but were unable to capitalize as they entered halftime with a 1-0 lead.

The second half saw a lot more action as 4 goals were scored in total. The first goal of this half saw the Gauchos extend their lead to 2, as Helwig was able to score. However, sloppy defense from UCSB led to the Gauchos conceding a penalty shot, which the Highlanders put away to cut the lead to 2-1. Only seven minutes later, UC Riverside was able to tie the game at two apiece with a goal from redshirt sophomore forward Charisma Benitez. Although hard to swallow, the Gauchos were not shell-shocked as they immediately moved up the field to get the game-winning goal less than four minutes later. This goal was scored by Helwig again: her 3rd goal in two games. UC Riverside attempted to tie the game late but were unable to as the Gauchos held on to secure a 3-2 victory.

As the season winds down, the Gauchos only have two games left in the regular season. UCSB will finish 2022 with home games against UC Irvine and Long Beach State.