The Planned Parenthood Central Coast Action Fund and local elected officials met in front of the Santa Barbara County Courthouse on Oct. 10 to urge voters to pass Proposition 1 — an amendment to the state constitution guaranteeing the right to reproductive freedom. 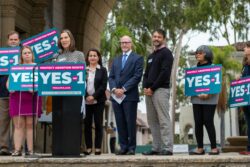 Proposition 1, up for vote this November, would ensure the right to an abortion by explicitly prohibiting the state of California from denying or interfering with personal choices related to reproductive care. The proposition has already been passed by the California State Assembly and requires a simple majority vote in the Nov. 8 midterm elections to go into effect.

“The Dobbs decision takes control from women, and especially those who are poor or marginalized, of the most momentous decision in their lives,” she said.

Luz Reyes-Martín, vice president of Community Engagement at the Planned Parenthood Central Coast Action Fund, reflected on the dismantling of abortion rights nationwide in light of the Supreme Court ruling to overturn Roe v. Wade and the enactment of abortion trigger bans in Texas and 13 other states.

“The attacks on abortion rights have been ongoing as we know for many years, and they intensified in recent years,” Reyes-Martín said. “A year ago in September, Texas passed their SB-8 law, and then this past June, the Supreme Court ruled in Dobbs versus Jackson Women’s Health and overturned Roe. In the weeks and months since, we’ve seen chaos, confusion all across the country.”

Hundreds of Santa Barbara locals mourned the loss of federal protections for abortion rights in June with a vigil protesting the Supreme Court’s decision. Reyes-Martín  encouraged community members to empower themselves in this election by voting “yes” on Proposition 1.

“We have a historic opportunity to make our voice heard with Proposition 1 and for California to send a resounding message to the rest of the nation: ‘Not here. Not today. Not tomorrow,’” Reyes-Martín said.

According to Reyes-Martín, local officials are working hard to enshrine reproductive freedom as national efforts to restrict abortion access continues.

“We are going to make sure that the right to an abortion and contraception is in our California State Constitution, and that we work hard as a state, as a community, as activists, to work to bring that right back to places in our country where it’s being dismantled.”

Hartmann spoke about her personal experience with the expansion of women’s life choices after the Supreme Court’s 1965 decision to protect access to birth control and abortion rights in 1973.

“I am among that first generation of women whose education and career opportunities opened up because of these rights,” she said. “Women like me were able to attend college, go to law school, and run for public office, our career opportunities, wages and independence group, because we had the right to decide if and when to start a family.”

During the event, Hartmann reflected on the experience of motherhood and pregnancy, and said that the choice to go forward with raising a child should remain a personal one.

“No one bears the challenges to health and economic stability of starting or expanding one’s family more than mothers,” Hartmann said. “It is their primary commitment for 18 years or more. This is why women should have the right to make this most personally life-defining decision.”

In order to maintain reproductive freedom in the state, Hartmann encouraged voters to vote “yes” on Proposition 1.

“While California has a long legacy of supporting abortion rights, we cannot guarantee who will be in power in the future,” she said. “To preserve these rights, we must codify reproductive freedom into the state constitution.”

Hart expressed his confidence in the proposition’s ability to succeed and encouraged his constituents to cast their vote this election season.

“California has a long tradition of supporting abortion rights and reproductive freedom for women,” Hart said. “I think Proposition 1 will win handily, but it’s always important to actually express your vote — not just be supportive of the issue, but to pull out your ballot, fill it out and make your voice heard in this election now.”

Hart said the local Planned Parenthood chapter serving the tri-county area has seen an influx of out-of-state patients seeking access to abortion services in recent months. Although the greater demand has strained local resources, Hart said the county is eager to serve women across the country in an effort to ensure broad and equitable access to reproductive care.

“We’re here, and we’re open and we’re ready to serve the women of the country who need to have access to safe and legal abortions here in California,” Hart said.

Prop. 1 is extreme, expensive, and unnecessary.
It will allow late-term abrtns up to moments before birth, even on healthy moms and healthy babies, and the cost to taxpayers for abrtns will be in the hundreds of millions.

If Prop 1 passes it’s going to strain local resources even more and we the tax payers will have to pay for it. CA has already budgeted $220 million to expand abortion in CA! Our tax dollars will continue fund Prop 1 for years to come and we don’t want that!