The Daily Nexus
Features & Essays
‘Sad Girl Indie’: the complex women behind the label
October 6, 2022 at 10:07 pm by Marisol Cruz 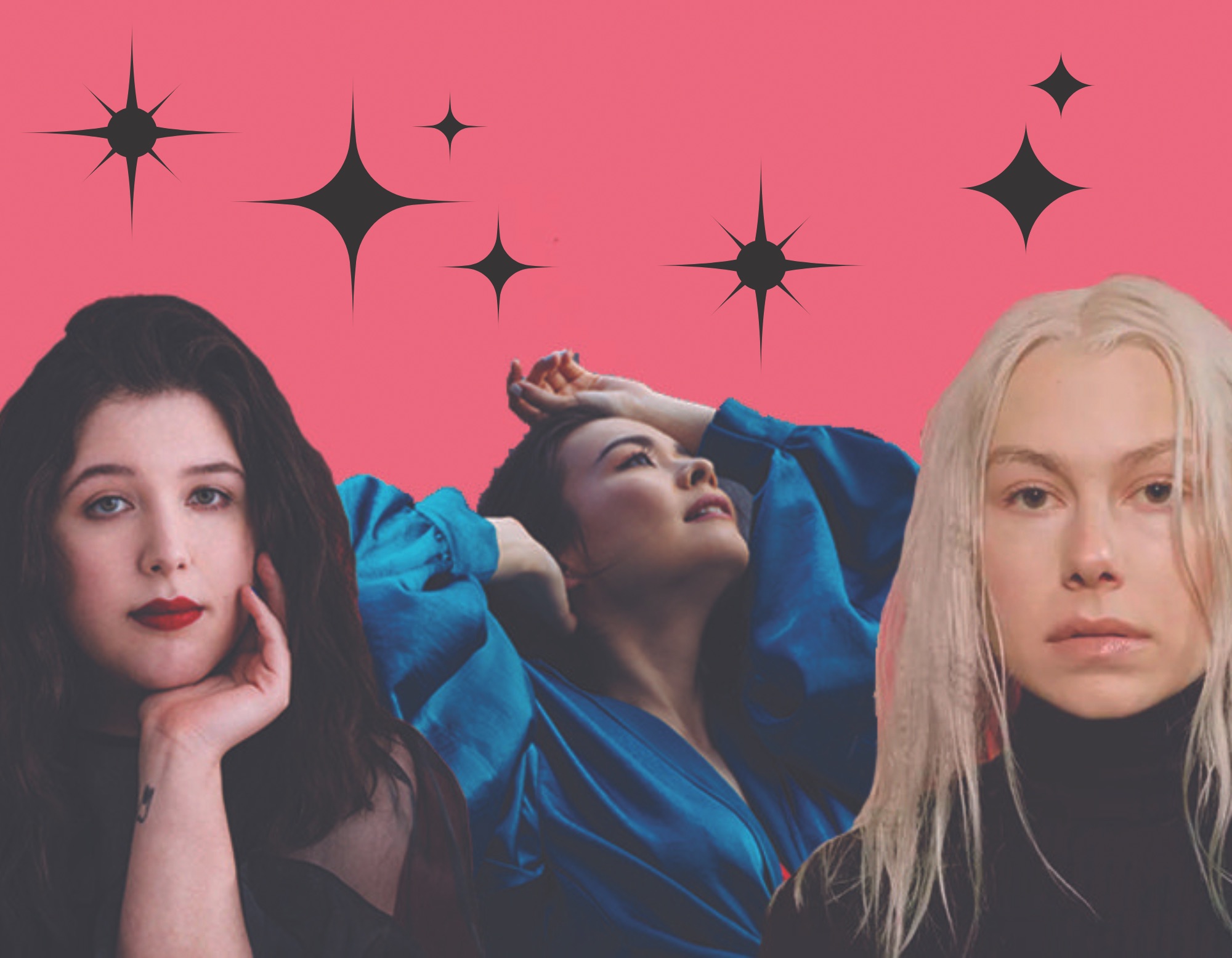 “Sad girls” are alternative rock and indie women and femme artists that are vulnerable or raw in their craft; their music often features lyrics about heartbreak, loneliness and trauma paired with melancholic instrumentation. “Sad girl indie” is a subgenre that artists like alt-indie singer-songwriter Lucy Dacus are often pigeonholed into.

“sadness can be meaningful but I got a bone to pick with the “sad girl indie” genre, not the music that gets labeled as that, but the classification and commodification and perpetual expectation of women’s pain, also i don’t think my songs are sad, anyways good morning,” alt-indie singer-songwriter Lucy Dacus said in a tweet.

As Annie Parnell from Audiofemme writes, “the term ‘sad girl indie’ occupies a complicated gendered space in contemporary pop culture.” While it is one thing to emotionally identify with personal, emotional art, the culture that has evolved around this is one that seems to glamorize the sadness these women and femme artists are experiencing, while reducing them to the pain that they were vulnerable enough to share in their music.

“Sad girl indie” is essentially a niche archetype of the romanticized, tortured artist. And when these artists stray from this label by producing music that isn’t drowned in sadness, they are criticized by certain areas of their fanbases.

Internet discourse has highlighted such negative, and even toxic, impacts of the subgenre yet the label remains prevalent. There is even an official Spotify playlist named “sad girl starter pack.” On this playlist, you can find artists like Mitski and Phoebe Bridgers: artists who are seen as some of the figureheads of the subgenre.

Japanese-born American singer-songwriter and multi-instrumentalist Mitski broke into the music scene with her first studio album “Lush,” released in 2012, while she was studying music at State University of New York at Purchase.

In her music, Mitski explores personal and self-reflective themes of coming of age, unrequited love, loneliness, troubled relationships and self-preservation.

Such intimate experiences in her music allows fans to see parts of themselves in Mitski. However, this can create an emotional connection that ties Mitski and her art to a listener’s identity, making a listener feel entitled to her and her art.

“I am a musician, but the reason they really pay me the big bucks is to be the place where anybody can put all of their feelings, their ugliness, that doesn’t have a place in their own lives. I’m like the black hole where people can dump all their shit, whether it’s a need for love, or it’s hatred and anger,” Mitski said to The Guardian.

Moreover, Mitski is one of the few women of color in this subgenre, which only compounds the pressure. Meanwhile, her lyrics that grapple with racial identity are often overlooked or dismissed.

On her 2016 album “Puberty 2,” Mitski explores identity on the track “Your Best American Girl.” Mitski lamentably sings “Your mother wouldn’t approve of how my mother raised me / But I do, I finally do / And you’re an all-American boy / I guess I couldn’t help trying to be your best American girl.”

Mitski has also discussed what it is like to essentially be a commodity.

“It almost doesn’t matter what music I write and put out into the world. At the end of the day, I’m a woman in public, allowing myself to be consumed … Even completely private citizens who are Asian women are more objectified, fetishized and expected to be submissive. There’s more a feeling of ownership towards people of my identity, in general,” Mitski said.

In 2019, while performing in New York for the close of her tour for her 2018 album “Be the Cowboy,” Mitski declared that this performance would be her last indefinitely. Shortly after, she clarified that she is not quitting music. However, in 2021, she revealed to Rolling Stone that she did intend to quit music at that moment due to the pressures that were placed on her.

Mitski has released new music since, with 2020’s “Laurel Hell,” which found Mitski exploring pop sounds, especially ’80s-inspired pop that has been dominating the pop scene in recent years. While “Laurel Hell” is full of haunting synths and nihilistic lyrics, some fans felt it was too “commercial.”

It’s unsure where Mitski’s musical journey will go next — whether or not she truly quits music is her decision, but it’s hoped she will continue to make music on her own terms.

Pasadena’s indie-rock singer-songwriter and guitarist Phoebe Bridgers was met with critical acclaim after releasing her debut studio album “Stranger in the Alps” in 2017. This was followed up by her most recent album, 2020’s “Punisher.” In her music, Bridgers often explores themes of therapy, familial relationships, depression and death.

The haunting landscape of her music allows fans to quickly label Bridgers as a sad girl. Moreover, her vulnerability in sharing and discussing personal issues has led people to share their experiences with Bridgers, which has caused an emotional impact.

“It’s definitely scary. I need a better way to cope with it. I don’t know what to say to people. That’s usually what I say — ‘I don’t know what to say.’ ‘Thank you.’ Maybe ‘Check out these records.’ And I try to listen to people,” Bridgers said in an interview with Exclaim!, after sharing that a fan told her that her boyfriend died from a heroin overdose.

Bridgers is also a member of boygenuis, an indie-rock supergroup that also includes Dacus and Julien Baker. The up-and-coming indie-rock artists banded together for a self-titled EP that seamlessly meshed their distinct styles together.

However, the group was also confronted with the “sad girl indie” label. As Dacus mentioned in an interview with the group, the members of the group have been dubbed “queens of the Sad Girl Club.”

In the same interview, Bridgers spoke on the commodification of sadness.

“I don’t want to sell people the idea that wallowing in your own misery is the thing … talking about [mental health] is amazing and relatively new in the grand scheme of things. But also, monetizing it in a way that’s like, picking things and [saying], “Yeah, that’s your thing”… I don’t know, I had a couple of dark conversations with labels, similarly,” Bridgers told Jezebel.

Bridgers has new music on the horizon, with fans speculating that a new album will be released in 2023. It’s unsure which music direction Bridgers will take. In a 2022 interview, the indie-rock artist discussed writing “happy” songs.

“I think that, like, peppy love songs get kind of a bad rap as being dumb. And I think my next challenge in my life is to, like, have a, like, way to write about happiness that doesn’t make me cringe,” Bridgers said in an interview with CBC.

Artists like Mitski, Bridgers and Dacus explore the personal and intimate in their music, often conveying a sense of sadness at times, but they are not simply “sad girls.” A look into each of their respective discographies will reveal a wide array of emotions, themes and sounds.

There is nothing wrong with the way these artists express themselves in their craft, and there is nothing wrong with fans and listeners feeling connected to their music. However, restricting artists to a label and a music scene for the type of music they make, while they are already marginalized in the industry, can be harmful. These artists’ reception to this label has demonstrated the tolls they have faced.

The romanticization of art and entitlement to artists points to a greater issue on the way we consume art and artists today. Yet, it can still be underscored that women and femme artists in indie and rock are people who feel more than one emotion; they have so much to offer with their artistic abilities and shouldn’t feel relegated to a fabricated brand that was created by others.