The County of Santa Barbara officially filed a lawsuit against the Regents of the University of California on Thursday, Sept. 29, for the university’s alleged failure to comply with its housing obligations for students and faculty. 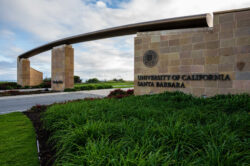 The county engaged in mediation with the university prior to its decision to pursue litigation before it unanimously voted to sue UCSB at a closed session meeting on Aug. 30. Daily Nexus File Photo

The county has accused UC Santa Barbara of violating the 2010 Long Range Development Plan (LRDP) — a contract stating that the university must cap enrollment at 25,000 until 2025, build more dormitories for the additional 5,000 students the UC mandated every campus to enroll and build 1,800 new units for its faculty and staff.

The university expressed its disappointment in the county’s decision to pursue costly litigation in a Sept. 30 statement provided by UCSB Media Relations Manager Kiki Reyes.

“We are deeply disappointed that the County has chosen to move forward with expensive litigation over ongoing collaboration with the University. The draft of the lawsuit that we are aware of is anti-student in nature and is counter to the State of California’s goal of expanding access to a UC education,” Reyes said in a statement to the Nexus.

The county engaged in mediation with the university prior to its decision to pursue litigation before it unanimously voted to sue UCSB at a closed session meeting on Aug. 30.

Santa Barbara County Second District Supervisor Gregg Hart said that the university’s failure to comply with the LRDP left the county with no course of action but to pursue litigation.

“Over many years, UC Santa Barbara has failed to meet its promise to provide adequate housing for students, faculty, and staff. Following extensive negotiations, the County’s only remaining tool to compel the University to build the housing it promised our community is, unfortunately, through litigation,” Hart said in a statement to the Nexus.

Reyes denied that the university had violated its LRDP requirements and highlighted recent projects that added student and faculty housing.

“Contrary to the allegations in the lawsuit, the University was able to offer on-campus housing to all undergraduate students that applied this academic year. The University is committed to providing more affordable on-campus housing for its students in addition to the recently completed projects that created an additional 1,500 beds for students and 160 faculty homes,” Reyes said in a statement to the Nexus.

UCSB plans to house several thousand additional students through the construction of Munger Hall — a project with a delayed completion date of summer 2026. The Ocean Road Housing Project, approved by the UC Regents in May, aims to fulfill the LRDP through the creation of up to 1,800 new housing units for its faculty and staff by 2025.

Hart said that delays of UCSB projects have exacerbated the housing market crisis in the neighboring areas of Goleta and Santa Barbara, where communities are experiencing rising rent costs and overcrowding amidst the housing shortage.

“Our entire community feels the effects of the University’s delay in building the number of housing units that were agreed upon. The County is committed to holding the University accountable and reducing the pressure placed on our local housing market,” Hart said in a statement to the Nexus.

Reyes continued that the lawsuit would place a financial burden on the university and harm students reliant on UCSB for need-based aid and resources.

“The County appears to be attempting to commandeer already scarce public university resources that are currently used to support students and research endeavors that impact our local community, the state of California, and our country,” Reyes said. “For perspective, the amount of the lawsuit is more than UC Santa Barbara receives annually in State funding and is approximately equal to the annual need-based financial aid resources the University provided to our undergraduate students.”

UCSB is also in litigation from the city of Goleta — which filed its lawsuit in December 2021 — over allegedly violating plans to add housing and cap enrollment under the LRDP.

The county has retained Lina Somait as the active attorney for the case. A first hearing of the case is scheduled for Jan. 30, 2023, at the Santa Barbara County Courthouse.