The UC Santa Barbara Men’s Soccer Team hosted No. 5 Stanford in the final game of their impressive preseason run on Saturday night. A strong initial offensive charge seemed to exhaust the team early as the Gauchos struggled to maintain possession of the ball and create any real threat on the Stanford goal in the 1-2 loss. 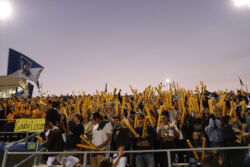 The opening 10 minutes saw the Gauchos at their best, with purposeful and intricate passing against a sleepy Stanford. Their play was rewarded with an early goal from the team’s most lethal striker this season, sophomore Salvador Aguilar, who improved to 5 goals in 9 games. Junior defender Timon Windisch sent a long overhead ball which should have been a comfortable reception and clearance for the Stanford Cardinal, but was mishandled. Aguilar’s speed and 6-foot-2-inch frame allowed him to outmuscle the Stanford defender and slot a shot through the legs of the keeper.

The goal served as a wake-up call for Stanford, who soon responded with their own string of passing plays that led to a goal. The Cardinal worked the ball through the Gaucho defense until Stanford forward Jackson Kiil found space between sophomore and senior defenders Caden Vom Steeg and Henry Davies in the 18-yard box, collected a pass and turned for a left-footed shot across the face of goal.

The momentum from the goal pushed the Gauchos back on the field as they were forced onto their back foot and dug in to defend for the rest of the match. Head coach Tim Vom Steeg acknowledged the difficulty of the Stanford attack but praised the team for their efforts. Coach Vom Steeg added that the team played the best soccer he’s seen all season.

“It was disappointing that we would go into halftime instead of being up 2-0, it’s 1-1. It’s also the least number of saves that [junior goalkeeper] Leroy [Zeller] has made all season [1]. So our defense played very well,” he said.

Zeller added that the match acts as an indicator for where the team is compared to the top 5 in national talent.

“Every game is exciting, and especially if we play at home, especially against a good team such as Stanford, we can really see where we are, where we stand right now, and we can see what we have to work on,” Zeller said.

The second goal came from a header by Stanford defender Keegan Hughes off a corner kick. An unlucky deflection off the back of Windisch sent the ball in a direction that Zeller could not redirect his position in time to catch.

Despite the loss, the Gauchos held a very tight game with the No. 5 Division 1 team in the nation and now look to use their experience in the Big West Conference opener against UC San Diego on Sept. 28.