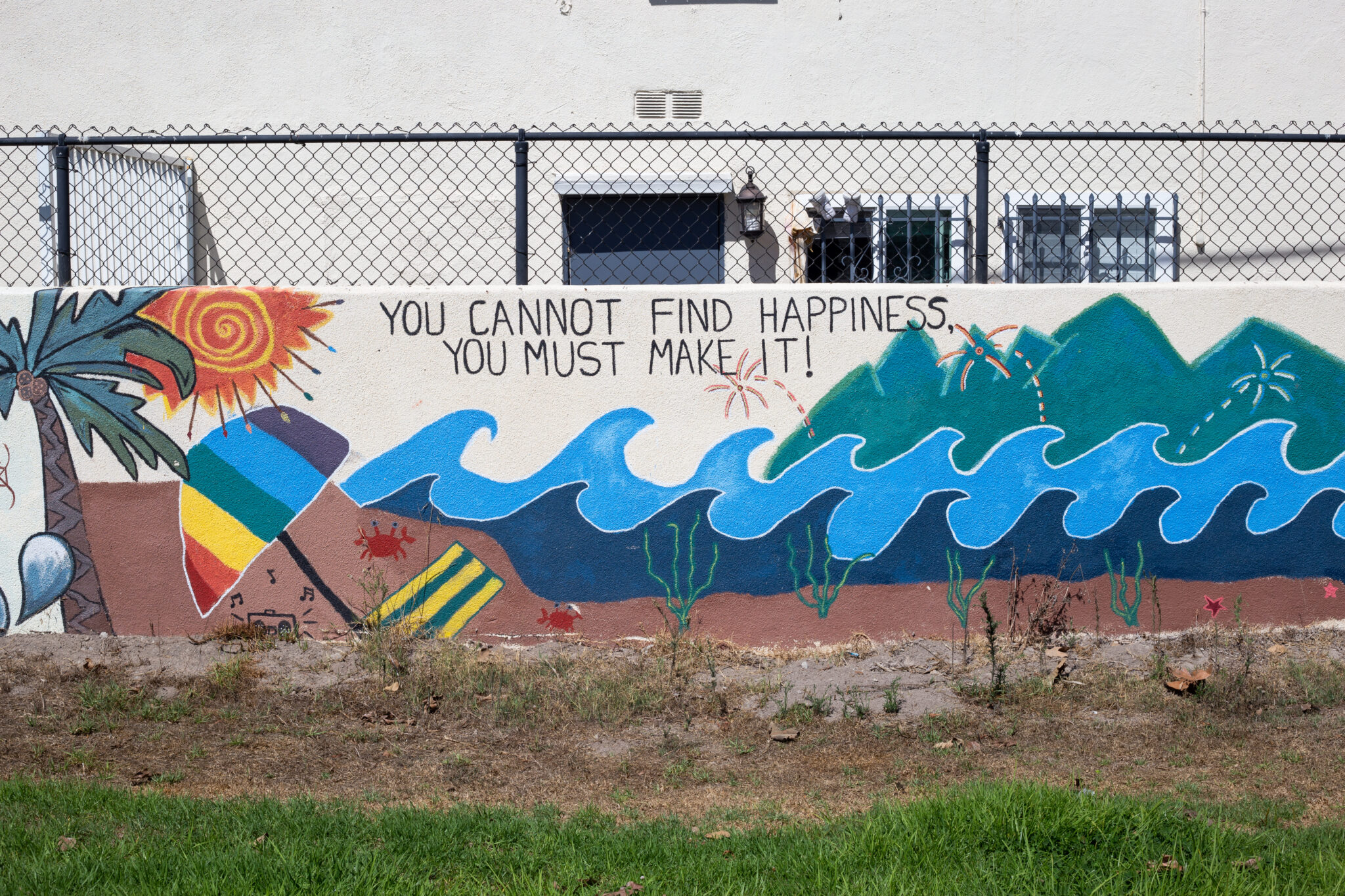 The program was coordinated by recent doctoral graduate of UC Santa Barbara Gevirtz School Stephanie Arguera with support from the Center for Publicly Engaged Scholarship and the Department of Education’s Dr. Rebeca Mireles-Rios.

Youth center teens began the project in Winter Quarter 2022, attending weekly workshops and activities with Latinx students, faculty and staff at UCSB. In the springtime, the center’s teen leadership group began the design process by brainstorming, sketching and voting on potential mural ideas.

“I was involved in coming up with ideas and we all helped out to draw a final draft and stencils for the flower mural,” eighth grader and muralist Diego Lopez said. “I like that as a team we were able to think of really good ideas and make the project go faster.”

The group decided on the two designs after multiple drafts, stencils and cardboard mock-ups. Past years’ artwork included depictions of marine animals, nature scenes, quotes and more representation of the youth in I.V. A total of six murals have been painted by the youth center since 2017, including the two newest additions.

“We really dig into the theme and elaborate because the first idea always sounds great, but it’s always important to take some time away and come back to it,” Arguera said.

The painting of the murals commenced in June after the designs received approval from the I.V. Recreation & Park District. A team of 20 youth center teens, along with Arguera and additional community volunteers, completed the installations over roughly two weeks. A ribbon cutting ceremony held on June 27 celebrated the unveiling of the two murals.

This year’s project marked a return to regular operations for St. George’s Youth Center, following disruptions to its activities during the COVID-19 pandemic, according to Arguera.

“The youth at the teen center typically look forward to a big project in the summertime, so to have that rug pulled out from under you is a drag, no doubt,” Arguera said. “But I would say [this year] wasn’t as easy as previous years. I think we are all coming back to this sense of normalcy, so putting that back into practice was different than previous years.”

Lopez, who frequently attends the youth center, noted that he appreciates all of the activities and support available at the center.

“I like to go to the teen center and not just straight home because it is always a great time there,” said Lopez. “I like to play Speed with Raul and Connect Four. Sometimes we even cook food and play games for prizes.”

After weeks spent in the summer heat, with center-provided snacks and supplies, Arguera described the murals as something of the youth’s creation.

“My favorite part is just seeing the feeling of accomplishment and ownership over a pretty big piece of artwork that is public that they’re going to see for years,” she said. “It takes an investment, but it makes it all the while.”

Since the project’s completion in June, a portion of the sunset mural has been defaced with graffiti. The Center has not yet been able to remove the graffiti, according to Youth Center Director Raul Macias, who also said that the majority of the graffiti took place on a nearby blank wall.

“We noticed and we all felt sad and asked why people would do that to a kids’ mural,” Lopez said. “I hope we fix it soon.”

The St. George Youth Center is planning on constructing more murals in summer 2023. Beyond painting, the center provides afterschool and summer programs for grades 5 through 12, including cooking classes, robotics training, tutoring and various sports.

“The center is basically a safe haven for the local community, teenagers and families,” Macias said. “Isla Vista is a unique place with a high percentage of university population, so we serve the underserved community of families and teenagers.”