The passage of California Assembly Bill 524 — the Campus-Recognized Sorority and Fraternity Transparency Act — will require all campus-recognized fraternities and sororities on California college campuses to submit information and data on their organization’s practices and activities as of July 1, 2023. 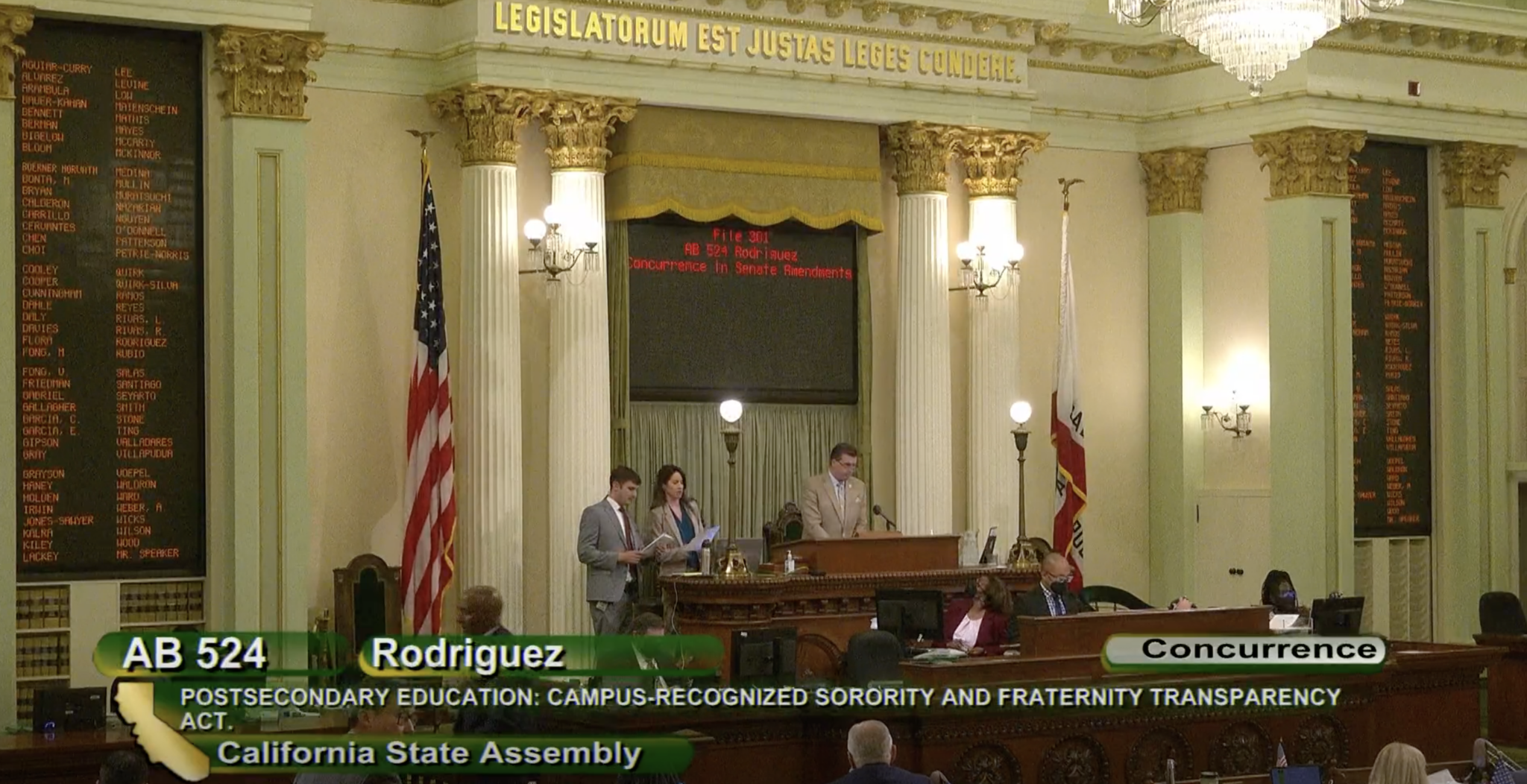 Universities are responsible for compiling and maintaining the information on their Greek life website homepage and emailing a copy of the report through a campus-wide email by Oct. 1, 2023, according to the bill. Courtesy of California State Assembly

“I happened to be there at the beginning, and this bill really started off in its infancy,” she said. “Myself and some other members of SASA at the time conceived the bill with a very different idea.”

The bill, signed into law on Sept. 13 and authored by Assemblymember Freddie Rodriguez, maintains that organizations will report the location, date and time of any sanctioned event, their current conduct and recognition status, the number of citations or disciplinary actions a chapter received, the addresses and events where the misconduct occurred, grade-point averages, total money fundraised and community service hours completed, among other data.

Universities are responsible for compiling and maintaining the information on their Greek life website homepage and emailing a copy of the report through a campus-wide email by Oct. 1, 2023, according to the bill.

The bill was co-sponsored by the SASA nonprofit — which has local chapters on the UC Santa Barbara, Santa Barbara Community College and Santa Cruz campuses — and the University of California Student Association.

Currently, the Greek Life website reports that there are approximately 50 campus-recognized Greek-lettered organizations and around 2,500 members, with over 10,000 hours of community service each quarter and a 3.3 average GPA. The conduct status of each organization is also displayed on the website.

Sky originally wanted to provide students with a service to anonymously report instances of sexual assault and where it occurred, including if they were at a sorority or fraternity. Because the information was unverifiable, the university pushed back, and SASA pitched the idea as a bill, which was developed into its current form.

“It’ll help the university identify the kinds of behavior within it that is occurring within certain fraternities and sororities, and they can choose how they want to deal with it,” Sky said. “When I was a student, and I was in this work, a big issue was the administration saying that they didn’t have the data to be able to take action on certain things.”

Under AB 524, universities will be required to retain the information on fraternities and sororities from at least the last ten years, which will allow observation into the behavioral patterns of Greek life organizations.

“It’s a way for these institutions to collect patterns of misconduct that happened within certain individual groups, rather than painting every single group with the same brush,” UCSB English doctoral student and SASA director Alanna Bartolini said.

“It’ll also allow students to create informed decisions about where they go, which groups they associate with, which ones they want to pledge … so it’s really just to empower people with information to make decisions about their own safety,” she continued.

According to Sky, SASA originally wanted the bill to extend to all on-campus clubs and organizations but received “a lot” of pushback because of how difficult it was to collect that breadth of information. She cited a 2007 study by the Department of Justice that found assaults were more likely to occur at fraternity parties and sorority women were more likely to be assaulted than non-affiliated women as one reason for the select focus of the bill.

“I know a lot of that kind of information can be seen by fraternities and by Greek life as damaging to their reputations, etc., but a part of this bill is just showing what fraternities are following that statistic and what fraternities are actually just doing, you know, the work that they claim to be doing and good, philanthropic work,” she said.

Fourth-year history of public policy and law Alex Niles, UC Student Association president, said he felt the bill was a win for students.

“I think they’ll help people make informed decisions about where they go party or join. And I just think that’s a game changer because it’ll start to show where and what places are and are not safe over time,” he said. “I think [in] three or five years, the data going back will start to be a mixture of who’s improving or who is really problematic over time. And it’s helpful that way.”

Niles said that he believed the bill’s focus on Greek organizations is warranted.

“I think that’s pretty simply warranted because Greek life continues to be the organized center of sexual violence, racism, homophobia, elitism on our campuses,” he said. “Their behavior hasn’t changed. The kinds of harm that their culture enables and protects and perpetuates haven’t changed.”

Sky and Bartolini both said that there was little pushback against the bill from Greek life organizations, and that some members of Greek life — particularly sorority women — lobbied alongside them for the bill’s conception.

“We received … support from several folks, especially sorority members, folks … especially women in sororities wanting to support the bill,” Sky said. “We’ve had several Greek life members engaged with us in lobbying for this bill [because] we had a lobbying initiative last year.”

Ultimately, both SASA directors said they were proud of the bill but felt that the work remains unfinished.

“I’m motivated, [but] there’s more work to be done. I think it’s just the beginning for us,” Bartolini said.