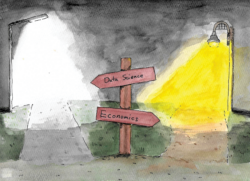 It can feel daunting to consider switching your major, especially if you’ve already invested a lot of time and effort into your current one. But in actuality, about a third of college students change their minds least once during their college years. I am one of them.

Personally, I’ve always focused on the big picture: “Where do I see myself in five or 10 years? Can I see myself pursuing this field in the long term?” These are both questions I asked myself toward the end of my sophomore year as I contemplated whether to switch my major.

Some students, such as second- or third-year transfers, have no choice but to settle for a different major than their initial choice for other reasons, like failing to satisfy their pre-major requirements. On the other hand, I was fortunate enough to have met these pre-major requirements and got into economics, a major known for its competitive, rigorous courses. But, I realized later on that it simply wasn’t the right major for me.

I think a part of me always knew I was passionate about data science. I also think a part of me underestimated my ability to perform well in these classes. I originally planned to minor in statistics. After taking my first PSTAT course at UC Santa Barbara, I realized how much I genuinely enjoyed the content, and a minor in statistics turned into a double major in statistics and data science. My interest increased as I finished my pre-major courses, particularly my CS courses. Taking CS9 was one of the highlights of my sophomore year, as I implemented abstract data structures and wrote my own sorting algorithms.

With an increasing interest in data science, I was devastated knowing that I’d have to prioritize economics for the next couple of quarters. I thought about switching majors but always talked myself out of it with the hopes that I’d eventually encounter something in one of my economics classes that inspired me. This, sadly, never happened.

In my dilemma, I consulted my friend who had recently switched majors. She told me, “At some point you just have to choose a path and stick to it.” I needed to ask myself what I truly wanted, independent of how many courses I’d already taken or how many years it would take to graduate.

I knew I needed to be honest with myself: I loved abstraction. I hated economic theory.

I knew I needed to be honest with myself: I loved abstraction. I hated economic theory.

For me, it was a spur of the moment thing.

Not the decision itself — which, in retrospect, I continuously contemplated throughout my entire college career — but actually going through with it.

For months, my friends, seeing how unhappy I was in my current major, urged me to switch to statistics, but it was attending the Data Science Club’s annual project showcase that really sealed the deal.

I attended the event as a reporter for the Nexus, writing an article about the first in-person project showcase since 2019. As I watched the groups present their projects, I was completely entranced. Each project was unique and innovative in their own way and reflected the cumulative efforts of each team member’s diverse skillsets.

I realized that was what I wanted to pursue. I wanted to analyze data in meaningful ways and help users make data-driven decisions. I wanted to understand the underlying data structures supporting the processes we use. I wanted to build a project with my team that I can proudly present to the audience.

After interviewing the winning team, I immediately rushed home and filled out and submitted a change of major petition. I didn’t give myself the chance to procrastinate. A few days later, I met with a PSTAT advisor to go over my four-year plan and was soon approved.

In retrospect, I think I initially stalled the decision due to fear. I was intimidated by the rigor of the major, and I was afraid I wouldn’t be good enough, so I stuck with my first major. But then I fell into a sunk-cost fallacy. Even though I was miserable in my first major, I still attempted to convince myself that it was what I wanted to do because, if I were to switch now, I would’ve wasted my time taking economics courses for nothing.

It would’ve been best if I had cut my losses then instead of remaining in the same place. By winter quarter, I felt rushed. Stacking major courses and unable to retain any material, I ended up falling behind on both majors. Readjusting my plan over and over was downright discouraging, yet I tried to convince myself that it was the best alternative.

What changed for me was that I realized I wasn’t passionate about economics. I no longer desired to stay in my original major just for the sake of it and didn’t want the fear of falling behind to deter me from pursuing something I genuinely enjoyed. I didn’t want to regret it later on, just how I’ve regretted not going with my gut and choosing statistics initially. I also realized that it’s never too late to start. There are plenty of students like myself and an abundance of resources to help us out.

There’s nothing wrong with changing your major if you are doing it for the right reasons. In college, you learn and grow, and, through experience, you transform into a different version of yourself with different interests and worldviews than, say, your freshman self. It took me a while to come to terms with that, but I hope my story can offer encouragement for those considering switching majors.

Though many aspects are still uncertain, and I am indeed a little behind, I know for sure that I am passionate about my current major, and that with time I will figure everything out, just like I did my previous.

Alice Zhang encourages you to boldly pursue your passions because you will be happier in the future. She is still somewhere being indecisive about which salad to have for lunch.