The Daily Nexus
News
Goleta Starbucks Employees Seek to Unionize
June 13, 2022 at 11:51 am by Mark Alfred

Workers at the Starbucks of the Goleta location on Hollister Avenue and Storke Road began casting ballots on June 1 in an election to unionize. 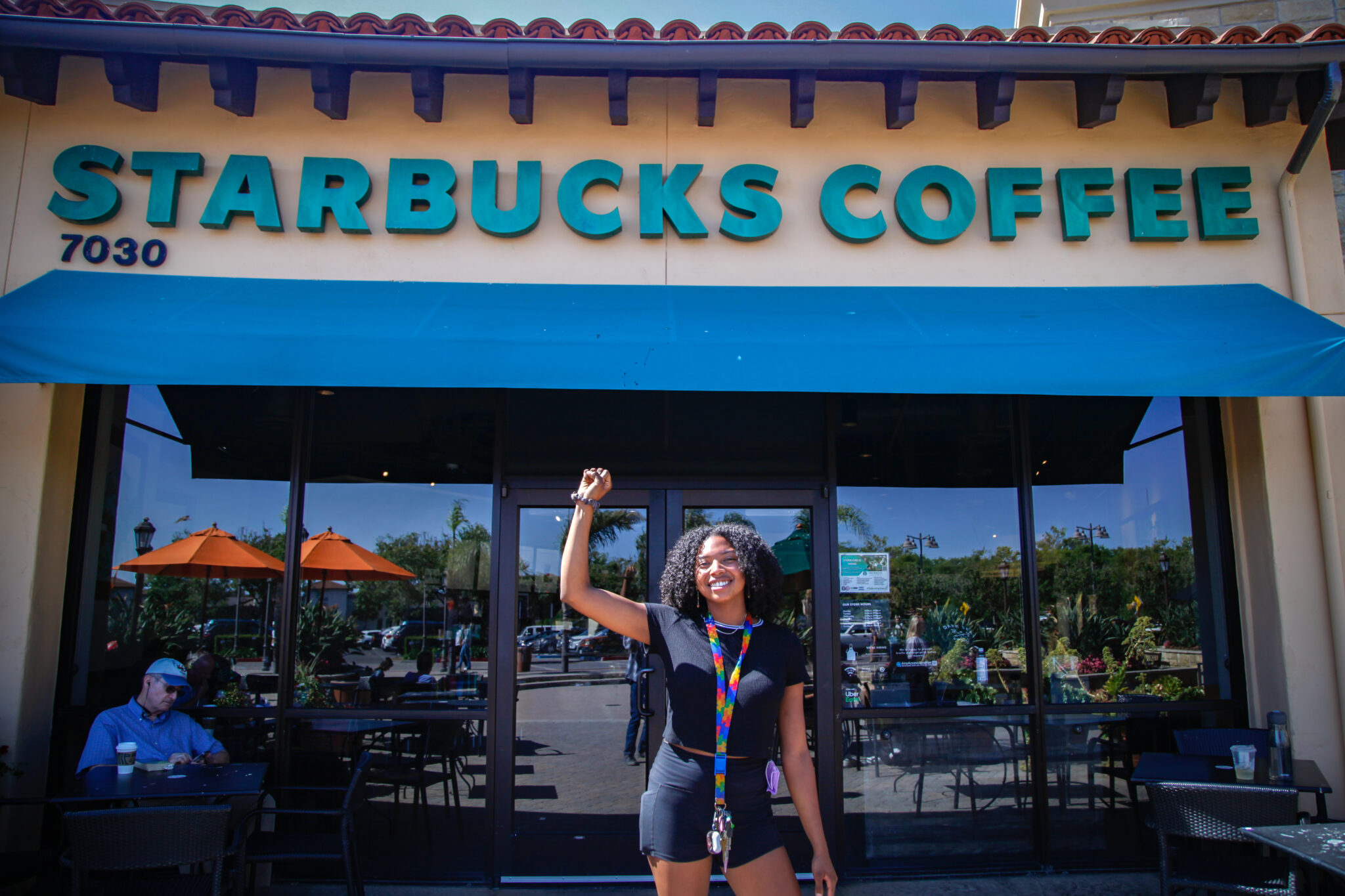 Brynn Campos, a store manager and UCSB student, stands in front of the Starbucks she hopes to unionize.

The election, organized through the National Labor Relations Board, could make them the third Starbucks to successfully unionize in California.

“Starbucks workers all across the country have long felt overlooked and underappreciated by this company,” the letter obtained by the Nexus said. “This store alone faces the daily struggle of being understaffed, over-worked, and unfairly compensated. Our hope with unionization is to come together to be able to negotiate our working conditions with our employers as equals.”

In an email statement to the Nexus, the Starbucks Corporation said that while the union efforts were not in the best interest of workers, they were taking the organizer’s concerns into consideration.

“We are listening and learning from the partners in these stores as we always do across the country,” the statement said. “From the beginning, we’ve been clear in our belief that we are better together as partners, without a union between us, and that conviction has not changed.”

The company also cited its decision to increase floor wages to $15 per hour by the summer of 2022, as evidence that unionization is not needed for competitive wages.

Campos said that the changes the cooperation enacted are not enough to keep up with the high cost of living in states like California.

“We’ve all felt the effects of inflation,” she said. “Minimum wage is $15 in California, which is the highest that it is anywhere and it’s still not enough to live on.”

Campos said she felt inspired to begin unionization efforts after joining the Starbucks subreddit and learning about the movement for unionization at franchise locations across the country, with the Buffalo, New York location being the first to successfully unionize.

“I saw that more stores were filing and just seeing what everyone was talking about and learning more about what unions are about I was like, ‘This is something I definitely want to see at my store,’” she said. “I sort of realized, if it’s gonna happen at my store, someone’s got to make it happen and I might as well be that person.”

Campos began the push over spring break, talking to her partners — the Starbucks term for co-workers — about the prospect of unionizing.

“About nine weeks ago now is when I first was like ‘okay, I’m gonna start talking to partners at my store,’ and so for about a week or two, I was talking to people,” she said. “The next week, I was signing union cards [and] the next week we were filing.”

One of Campos’ partners, Santa Barbara City College student Brooke Moore, recalled when she heard about the unionization effort for the first time.

“Brynn called me to tell me about it and, at first, I just wanted to support her and whatever her endeavors were,” she said. “Then, as I got more info about it, I realized that it was more of a personal thing to me as well. Just for the sake of all minimum wage workers, not just Starbucks employees.”

Moore said the company has a responsibility as a trendsetter to lead the way with higher wages and improved hours.

“Starbucks has always been the company to set examples for others, with the support that they give the LGBTQ+ community and the non-bias training that they’ve been giving us every year,” she said. “They always say that they’re the leaders in being here for the people, and they’re kind of slacking and they’ve been failing. So, I feel like we need to hold them accountable.”

On May 13, Starbucks stores in Long Beach and Lakewood became the first — and, so far, only — locations to successfully unionize in California. Campos met with organizers from both locations who helped her navigate the organizing process at her store.

“I had a Zoom call with them pretty early on [about] the unionization process and they gave me tips on our letter of intent to unionize and how that helps protect us as workers,” she said.

“They told us basically everything that came out of my district manager’s mouth before she even said it,” Campos continued. “I go to the back and I’m talking to my district manager and she’s saying the exact same things. They’ve got a script.”

Campos described how management mobilized against the unionization effort once it began at her store.

“Our district manager [was] in the store a lot with us, having one-on-ones with every partner, telling everyone how scary union dues are and how badly it could turn out,” she said. “They were putting up posters in the back telling us, ‘These are the benefits [and] upgrades your guys are gonna get in August and if you unionize, we can’t guarantee them,’ making it seem like we’re gonna lose out on a raise, on benefits, on tips.”

Workers at the store were scheduled with Campos less often after she began organizing efforts, she said.

“On my work schedule, I was noticing a lot less partners scheduled to work with me, specifically. I would go through the schedule for the week and I was like, ‘It’s funny that everyone else has two closers and a pre-closer, but I only have one,’” Campos said. “It’s like, [management] doesn’t want me to talk to my co-workers too much.”

“They’re not gonna outright do something really bold against me because they could get in trouble for that,” she continued. “But, I have seen little fishy things here and there like that.”

Despite these deterrents, Campos said she is optimistic about the election.

“I hope to win,” she said. “I can’t say ‘expect’ because you never know what’s gonna happen, but it’s a very, very strong hope.”

Beyond this campaign, Campos said she hopes to see a greater push for workers’ rights and representation.

“We do not have a fair seat at the table,” she said. “The only way we’re gonna get that is if we take it and if we fight for that, and if we’re willing to speak up and organize and work together.”

Due to restrictions brought on by the COVID-19 pandemic, the election is taking place via mail-in ballots sent to workers. It has not yet been announced when the final count will take place.

“A couple [of] people have talked to me like, ‘Hey, where’s my ballot? I’m ready to start voting.’ I think people are ready,” Campos said. “There’s a pretty strong majority support for the union.”