The Daily Nexus
News
Seniors Reminisce on Their Years at UC Santa Barbara
May 28, 2022 at 2:12 pm by Mark Alfred

After a turbulent four years, UC Santa Barbara graduating seniors reflected on their time on campus and online. From the campus community to the beach living, seniors shared with the Nexus what meant most to them during their time at the university. 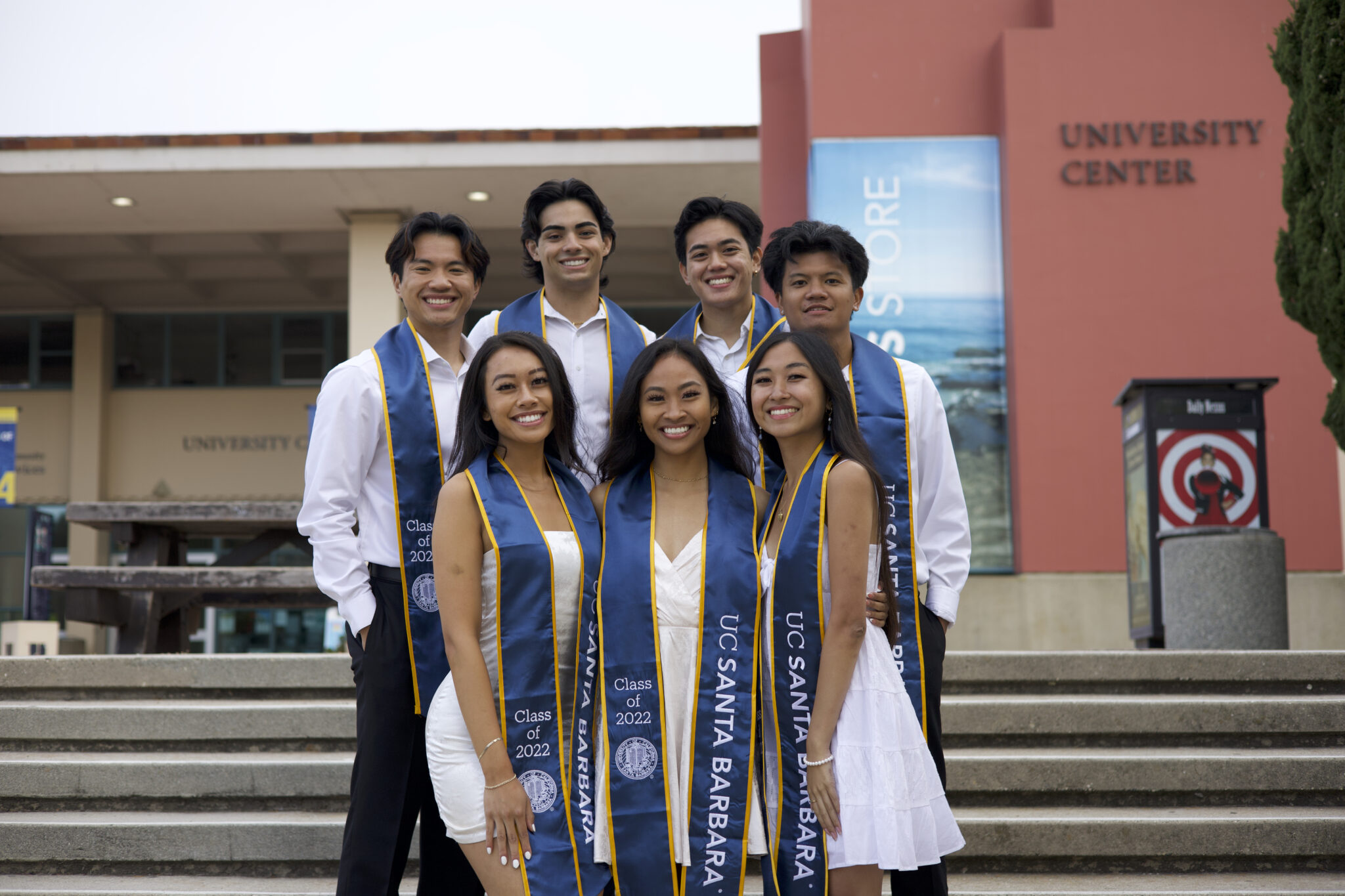 Fourth-year global studies major Alejandra Lara said she didn’t have UCSB at the top of her college list but quickly took to the campus and its community.

“I had a lot of fun, and I’m glad I came here because, honestly, this wasn’t my first option, but I’m glad I chose coming [to UCSB] because I met so many amazing people,” she said. “It’s a beautiful place, and I definitely had the best years of my life here. If you do come here, make the most out of it.”

Similarly, fourth-year environmental studies major Kyra Nadir wrote in an email to the Nexus that, upon visiting campus and the surrounding community, she was immediately drawn to UCSB.

“As soon as I visited, I genuinely felt at home, both on campus and in Isla Vista,” Nadir said. I loved the feeling of community and the easy access to nature, and UCSB quickly became my first-choice school. Some of my favorite things to do as a freshman were walking around the lagoon, getting food with friends in I.V. and exploring downtown Santa Barbara on weekends.”

“You can’t really complain about the location,” Oswalt said. “I think it draws a lot of people in; it definitely drew me here. You’re right on the beach, so no complaints there.”

Mallika Gupta, a fourth-year financial mathematics and statistics major, reflected on her growth at UCSB.

“I feel like I’ve grown so much during these past four years in college. From being an anxiety-ridden freshman to isolating during the pandemic and then trying to pick up the pieces again as a senior — it has definitely been a challenge,” Gupta said. “But I am so proud of the person I’ve grown into, and I am so grateful that I got to spend this past year back at the most beautiful place I’ve ever lived. I’ll sincerely miss my friends, roommate, classmates, coworkers, a cappella community and, most importantly, the ocean!”

Many seniors spoke about the friendliness of UCSB’s campus community as a whole. Fourth-year English major Leslie Reyes said that the friends she made throughout her time at the university helped her through difficult times.

Nadir similarly wrote fondly about the friendships she has made on campus, including with her current housemates who she has known since her freshman year.

“During my time at UCSB, I’ve also made some of the best and closest friendships I’ve ever had,” she said. “In our current house of six people, there is an endless supply of movie nights, arguments about ‘Twilight,’ debrief sessions and taking turns annoying our housemate’s cat, Juno. We’ve all helped each other grow into adults, and I feel incredibly lucky to have had them as a support system. While I’m going to miss seeing them every day, I’m also incredibly excited to see the wonderful things they do in the next chapter of our lives.”

Several seniors cited the quality of UCSB professors as a highlight of their time in college.

Fourth-year pharmacology major Serhat Suzer described the satisfaction of having instructors appreciate when students put in the work.

“I love talking to professors who are passionate about their field, and when you ask them a question that they find insightful, it’s just that light-up look on their face that lets you know that you did your due diligence; you know what you’re talking about,” Suzer said.

The graduating class of 2022 were only sophomores when the COVID-19 pandemic prompted schools to transition to online learning. Thiagarajan said that, while it was disappointing to shift online, UCSB’s accommodations helped the experience.

“I definitely think UCSB was a really good school to be at for COVID because there was a really good transition to online learning here, and I felt that there was a lot of help in terms of communicating with teachers online and things like that,” she said. “Overall, I look back at it pretty positively.”

Suzer said that the pandemic took away from his college experience, and he viewed his return to campus as an opportunity to make up for lost time.

“It was cut short because of COVID. We spent two years on campus out of a four-year education, so honestly I wish I took in more of the campus and that’s probably what I most regret,” Suzer said.

Reyes described the transition online as difficult, with at-home instruction lacking the same amenities as in person.

“It was difficult when it was online just because I need to read sitting in a classroom to learn, so it was definitely a difficult time, especially dealing with everything that was going on in the outside world,” Reyes said.

Fourth-year history of public policy and law major Sage Ceja said that she was surprised that she received a quality education given UCSB’s reputation.

“It’s definitely been weird, especially going through college during the pandemic, but I’ve enjoyed my experience here,” Ceja said. “I’ve been getting along with all the people I’ve met, and I definitely got a high-quality education which is kind of surprising given the stereotype of UCSB being a party school.”

Fourth-year communication and sociology double major Nyah Rae Scott has a self-described “love-hate relationship” with UCSB but said that, overall, her experience at the university has been filled with love.

“So much love for my roommates, my friends, my on-campus co-workers, the Rosarito’s Gaucho burrito and the randoms I met freshman year that I still have added on Snapchat,” she said in an email statement to the Nexus. “Constantly bonking my little ‘ol head at I.V. band shows, completely obliterating the arches in my feet by walking miles on chilly Friday nights in 2018, and talking my way into running one too many campus Instagram accounts was all worth it in the end.”

Nadir wrote that witnessing incoming students visit campus has been bittersweet, but she is hopeful their experience at UCSB will be as rewarding as it was for her. “Seeing incoming students touring UCSB with their families has led me to reminisce on my time here, and I wonder how their experiences will compare to mine,” Nadir said. “I’m confident that they’ll find their own unique place in UCSB’s community and know that they’ll leave here prepared to make a positive change in the world.”

Natalie Gomez and Caroline Gee contributed reporting to this article.