The Daily Nexus
The Daily Stench
From the Archive: Diet Ice Cream, Dire Consequences
May 27, 2022 at 4:20 pm by A. Wiessass and A Hercules 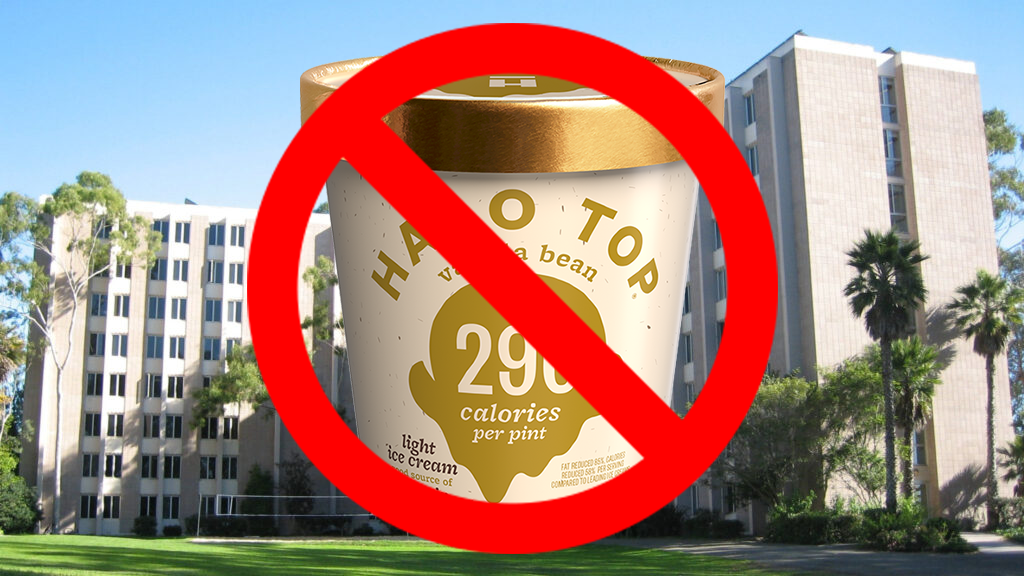 This article was written at the onset of the COVID-19 Pandemic when most Gauchos passed the time by binging shows on various streaming services.

Over the past several weeks, Isla Vistans have witnessed a surge in the usage of streaming platforms due to COVID-related binge-watching. In light of these unprecedented times, the Nexus has found that Gaucho streaming-service consumption has gone up exponentially as Isla Vistans turn to light entertainment as an alternative to grim news coverage.

But there is one thing that threatens the Gaucho way of life more than anything that has come before. Something that is acting to imperil the solace and unification that our community has found in streaming content: Halo Top ice cream and their ads on Hulu.

Halo Top Creamery is the biggest producer of low-calorie bullshit on the West Coast. While many have observed that even starving raccoons shy away in disgust when faced with a half-eaten container of Halo Top, the company has pumped their sludge into the hearts of Isla Vista incessantly over the years.

In response to “shit at its best” Halo Top ice cream, Minny Chippe, who had a good taste of some bad ice cream, said, “I’ve had a couple of pints because they were really cheap at the store, but I soon found out they were just trying to get rid of bad inventory.” Chippe continued, “Halo Top hurt me. I trusted them but their ice cream tasted like diet Snapple mixed with frozen milk, and for that, I can never forgive them.”

Many Isla Vistans voiced grievances specifically about their newest ads which urge people to “stop shoulding [themselves],” and yes, it’s supposed to sound like “stop shitting yourself.” The company loves cheap, shock advertising that makes people uncomfortable, but for what purpose?

When questioned on the discomforting effects of the company’s advertising, Halo Top CEO Justin Woolverton said (in between burpees), “Of course it’s uncomfortable [heaving]; it doesn’t mean it’s bad. If I didn’t make great ice cream, I wouldn’t be here.” Woolverton continued, “Every time I serve ice cream, I’m serving every member of the community. I post a black square on Blackout Tuesday weekly. What are you doing for the community?”

When pressed on the “disgusting frozen milk” flavor of his ice cream, Woolverton responded, “Do you work for an ice cream company? Why do you know so much about ice cream? Stop telling me what the ice cream should taste like — Halo Top is deeper than that, brother! Instead, you should ask yourself what you can do to have a more meaningful life.”

Woolverton’s focus on his own fitness, as showcased in this interview, reflects his company’s superficial focus on individual self-love and healing while neglecting to acknowledge national instances of inequities that affect individuals both locally and globally.

Historically, pandemics have forced humans to break with the past and imagine their world anew. Given the unthinkable human tragedy and exposition of the failures and lies of the global capitalist system due to COVID-19, collective care is necessary for communities to survive. The poorly timed Halo Top “stop shoulding yourself” campaign that reiterates past subpar Halo Top campaigns gives into the national disillusion that threatens an alternative future. It is disgusting that a company with Halo Top’s power uses its platform to separate members of society rather than unify them.

Cone-gratulations, Halo Top, you are truly the bad breath of ice cream. Isla Vista wants to get rid of you and get away from you as far away from us a COVID-ridden frat boy.

A. Hercules and A. Wiessass are lactose-intolerant sociologists.