The Daily Nexus
Events
Pop Sensation Olivia Rodrigo Performs at the Santa Barbara Bowl
May 26, 2022 at 10:50 pm by Joshen Mantai 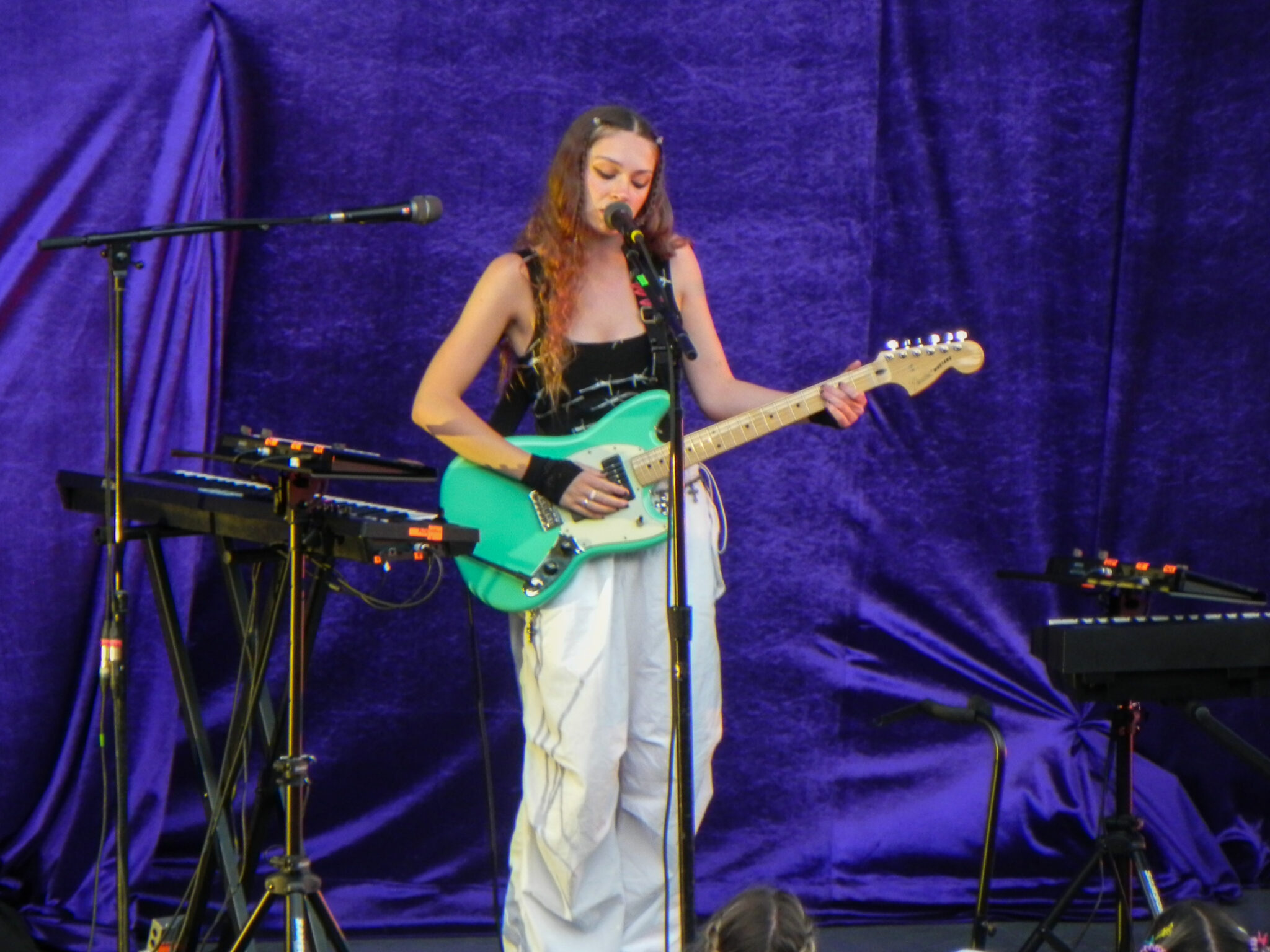 “I live for you, I long for you, Olivia” from One Direction’s song, “Olivia,” echoed through the Santa Barbara Bowl on May 21 as the crowd of about 4,500 eager young girls, college students, moms and more waited in anticipation for 19-year-old pop sensation Olivia Rodrigo to grace the stage.

While Rodrigo could have easily sold out larger venues with all of her accolades from her breakout this past year, including Billboard’s Woman of the Year and TIME’s Entertainer of the Year, she chose to place her headlining tour in smaller, more intimate venues — lucky for Santa Barbara residents who snagged tickets. After entering the venue, the line to purchase her tour merchandise alone wrapped down the hill for what seemed like miles with fans leaving the line holding multiple shirts, posters and hoodies, amongst the whispers of event managers who said the scene of frenzy was unmatched.

Rodrigo’s opener, British singer-songwriter Holly Humberstone, started off by performing an intimate, full-solo set with merely a guitar and keyboard piano, singing her tracks “Vanilla,” “Overkill” and more. The 22-year-old just came off touring with girl in red and performing a two-weekend set at Coachella.

Then, the Grammy Award-winning singer-songwriter captured the attention of every concertgoer when she arrived on stage, dressed in butterfly emblems and purple-hued clothing for her highly anticipated, sold-out North American leg of the SOUR TOUR — Rodrigo’s debut concert tour for her eponymous debut album.

Rodrigo performed every song from her 11-track 2021 debut album “SOUR,” starting off with the lead track “brutal,” as the towering, purple curtains dropped down with an illuminated “SOUR” and a spinning, disco ball set-piece that were reminiscent of a prom scene. She immediately set the mood for the night with her high energy that encapsulated teenage angst, singing, “They say these are the golden years / But I wish I could disappear / Ego crush is so severe / God, it’s brutal out here,” as shrieks reverberated throughout the venue.

The singer went on to maintain the liveliness with “jealousy, jealousy,” jumping energetically up the platform stairs effortlessly, from one side of the stage to the other in her heart-shaped top and plaid skirt ensemble. Her smash, career-defining hit “drivers license” followed as she belted “Red lights, stop signs / I still see your face in the white cars, front yards,” while sitting on a grand piano.

The Southern California native promptly introduced her all-woman rock band and covered songs by two artists she proclaimed to admire deeply, which included Avril Lavigne’s infamous hit “Complicated” and the Gwen Stefani-led band No Doubt’s “Just A Girl.” Rodrigo rounded out the first part of the set with the emotional ballad “hope ur ok” and a mash-up of “enough for you” and “1 step forward, 3 steps back,” which credits the melody from Taylor Swift’s track “New Year’s Day” off “reputation.”

For the second half of the set, Rodrigo quickly changed into a sparkly dress and matching arm warmers to perform “happier,” cooing “I hope you’re happy / But not like how you were with me / I’m selfish, I know, I can’t let you go.” Fans of her Disney+ show “High School Musical: The Musical: The Series” were left satisfied by her performance of the ballad “All I Want,” which she wrote for the show and attributes to the early jumpstart of her singing career.

Rodrigo’s emotional intensity throughout the night was contagious and accompanied her powerful vocal range well, as she pulled off melancholy renditions of “favorite crime” and the “brown guilty eyes and little white lies” lyric of “traitor” seamlessly. The pop breakout star blissfully told the crowd at one point, “I’m so glad I got to spend SOUR’s birthday with you guys,” referring to the one-year anniversary of her platinum studio album. Glaring white lights from smartphones filled the air as she lay on top of a piano to perform the hit song “deja vu,” with the crowd singing back “Car rides to Malibu / Strawberry ice cream / One spoon for two.”

Rodrigo’s encore was composed of her punk-rock hit “good 4 u” as confetti blasted across the whole venue to the crowd’s wonder. Following Rodrigo’s encore, the crowd seemed to be in awe, most standing still at their seats in lieu of the usual dart to the parking lot. Rodrigo seemed to have captured the hearts and full attention of the fans in attendance of the hour-long show, leaving everyone wanting more. Rodrigo’s European leg of her tour will start on June 11 in Hamburg, Germany.