The Daily Nexus
News
IVRPD and Pacific Coast Land Design Discuss Plans To Renovate Greek Park
May 23, 2022 at 11:33 am by Melea Maglalang

The Isla Vista Recreation & Park District discussed the renovation plans of Greek Park — the park on the corner of Embarcadero del Norte and Segovia Road — during their monthly board meeting on May 12. 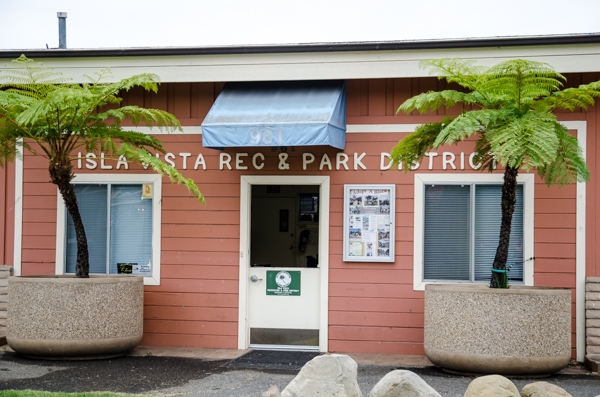 In April, IVRPD launched a survey for the community to vote on a set of design proposals and desired amenities. Daily Nexus File Photo

Community members identified Greek Park as the second-most priority for renovations — following Pardall Gardens — in a survey conducted by the Isla Vista Recreation and & Park District (IVRPD) in early 2021.

In April, IVRPD launched a survey for the community to vote on a set of design proposals and desired amenities.

The survey received 144 total responses, according to Pacific Coast Land Design landscape designer Breanne Alton. Proposals that received the most community votes are a water bottle refill station, power and charging stations and a seating area.

The survey also introduced three potential design concepts for the park that community members voted on. Concept A was a “Flexible Events Space,” which would include a central seating area and a stage to be used for a variety of events in the park. Concept B was “Lush and Playful,” which would incorporate more drought-resistant foliage into the park and provide spaces for activities like game tables. Concept C was a “Nature Sports Park,” which would provide more spaces for people to exercise and would add more environmental properties to the site.

“Lush and Playful” received the most survey votes, with Alton attributing its popularity to the design’s potential use for a variety of activities and emphasis on creating a more appealing landscape, Alton said.

“Overwhelmingly, community members have chosen Concept B,” Alton said. “We think that it’s because it’s both flexible, but it’s also bringing in this emphasis on the landscape which we see time and time again with your district. I think it’s this idea of and this love for spaces that are centered around the landscape.”

“It doesn’t necessarily have to be something that’s permanent in the space but just thinking about how can this space be flexible to do many of these things. But, incorporating ping-pong into the site could be really fun [and could] really activate this active Greek Park,” she said.

Community members also expressed support for transforming the preexisting basketball court into a multi-sport court to allow for a variety of games.

“The [multi-sport court] itself can host a plethora of activities, not just basketball. So, it’s set up for basketball, but it could also host activities like futsal or kickball or pickleball or even court volleyball. And right now, that has overwhelmingly overwhelming support, so we’ll plan to go in that direction going forward,” Alton said.

To preserve Greek-life identity within the park, the idea of creating a mosaic was a popular choice from the survey, Alton said.

“We asked what’s the preference for fraternity and sorority identity in Greek Park, and right now, in the lead is for a mosaic,” she said. “So, we’ve been brainstorming ways that a mosaic could be a beautiful, permanent piece in the park and represent Greek life in general.”

IVRPD is holding a community meeting on May 21 at Greek Park to gather additional feedback about the redesign before the concept is finalized.

This project is still in its early stages and has not yet received funding. IVRPD’s current park renovation projects, Pardall Gardens and Children’s Park, have been funded by California state grant programs. However, this is not an option for Greek Park, according to Alton, with these programs having passed the last round of funding available.

“We used the combination of Measure O, RIRE and Per Capita for Pardall. Unfortunately, some of those funds are no longer available. And, the state parks grant that was used for Children’s Park, to my knowledge, is the last funding cycle of SB 68 grant,” she said.

Alton said there are additional opportunities for funding to be looked into and is optimistic that funding can be secured for the project.

“We’ve heard through the grapevine that there are new opportunities that are coming out for these equity-based, environmentally-focused opportunities,” she said. “We think we can definitely find funding for the next era of Greek Park.”