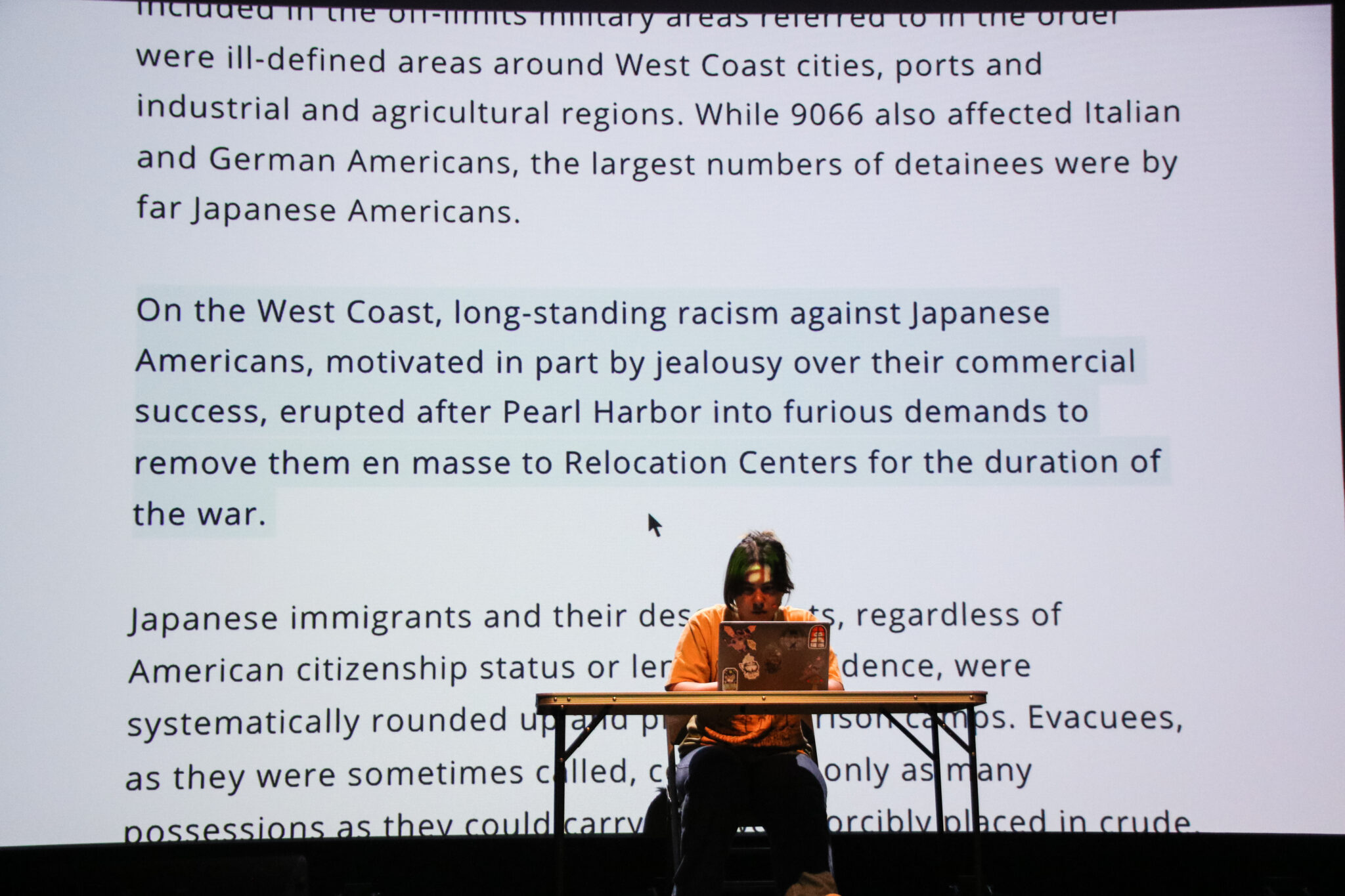 The play was halted due to the COVID-19 pandemic and the transition of UCSB life to a remote capacity. Courtesy of NSU

The production was initially intended to be showcased during the 2019-20 academic year. However, the play was halted due to the COVID-19 pandemic and the transition of UCSB life to a remote capacity.

Deena Umeda, fourth-year Asian American studies major and NSU vice president, wrote the play “Unearthed” — a story of a Japanese-American college student named Max who learns about their grandparents’ experience being incarcerated in internment camps during World War II. Throughout the play, Max is faced with the lasting intergenerational impact and trauma the internment had within her family.

Established through Executive Order 9066 by President Roosevelt during World War II, internment camps authorized the incarceration of citizens with Japanese descent to isolated and guarded relocation centers. Umeda said that their high school history curriculum glossed over the topic.

“I remember in high school, there was one paragraph about [the internment camps], and we moved past it so quickly. I was just like, ‘What? That’s my history, this is the part of the class where I get to learn about myself.’ And all you say is, ‘Japanese-Americans were put in camps and then we move on. And we don’t talk about how horrible it was,” Umeda said.

Umeda said that in writing “Unearthed,” they wanted to show the generational effects this history has had on Japanese-American families.

“[“Unearthed”] means to be able to look into your roots, into your history. Especially with hard topics like this in the Japanese-American community, it’s difficult to talk about hard stuff,” Umeda said.

Third-year pharmacology major and NSU president Nicholas Kikuta said the play successfully told the story of a Japanese-American experience in a manner that was also relatable for people of other cultural backgrounds.

“[The] themes of intergenerational trauma, while they sincerely affect the Japanese-American community, I’m sure other ethnic groups have felt that before. I think it made it easier to relate to through the play, and I think that all of that was helpful in both integrating the Japanese-American experience into the Culture Night, as well as expressing or helping other people understand and get a taste for our culture,” he said.

With a return to in-person learning, fourth-year Asian American studies and Japanese double major and NSU co-culture chair, Saeri Plagmann, said she wanted Culture Night to be an opportunity to bring the campus community together.

“I really just wanted to use this opportunity that we finally had coming back from the pandemic to bring NSU but also the general UCSB student population closer,” she said. “I know that Japanese-American history focuses on one specific community at UCSB, but our goal as Nikkei Student Union is to not just just draw in Japanese-American or Japanese people. It’s really just trying to spread out and get as many people to join us as possible and in this pan-ethnic coalition.”

The running metaphor of planting a seedling and watching it blossom into something new was central to “Unearthed.” Umeda said the metaphor symbolized how one can learn about these experiences and grow from them.

“Experience is like the seedling. It’s funny because unearthing is like finding something, but also like growing. I think it goes with the point where like, if we don’t talk about these issues, we can’t grow from them,” Umeda said.

“[The main character of the play] was unearthing this thing within her family, and now she’s able to grow and learn from it,” they continued. “She has discovered this new story about her family that she was never able to learn about before, and now she gets to grow, and she gets to show other people and remind people that this happened and have a better connection to her family as well.”

Kikuta said conversations around intergenerational trauma are important topics that are addressed within NSU because of the persisting effects these experiences have had throughout Japanese-American history.

“A discussion that we have every year in NSU is about intergenerational trauma because that’s a persisting effect of the internment that many of our ancestors faced, two or three generations ago when they were interned,” he said. “It’s something that is an issue within the Japanese-American community that has caused rifts between generations with issues like communication and not wanting to bring up a shameful history.”

Umeda described the “shame” that families felt after leaving internment camps and the lasting trauma of being wrongly incarcerated.

“There’s this shame that people felt after leaving the internment camps, like they felt like they did something bad. They didn’t want to talk about it, and that makes sense. They went through a horrible traumatizing event, it’s not something that you want to think about.”

However, Umeda said that it is up to her generation to open up dialogue surrounding the intergenerational trauma.

“So I think it’s up to my generation, like the nisei, yonsei, sansei — our generations — to step up and speak up for the people who had to go through it and make sure that their stories are heard,” they continued.

Umeda said they hoped the story would encourage people to connect with their heritage and further educate themselves about Japanese-American history and the impacts the internment camps had on Japanese-Americans.

“It’s important to tell this history. I hope people go and look up a story, maybe on their own time. I hope they learned something new. I’m hoping this isn’t new information, but I hope it encourages them to look into the people who have had to go through that,” they said.

Kikuta also said he hoped attendees could walk away with a better understanding of Japanese-American heritage in terms of connecting with their own cultural histories even if the experience has not affected their families directly.

“I really hope that the audience could walk away with a better understanding of the Japanese-American experience as a whole. Because obviously, that experience that Deena wrote about, and that was so beautifully portrayed in our culture, isn’t one that’s common to all Japanese-Americans, but it’s definitely prevalent within our community,” he said.

“[These experiences are] deep scars that we’ve had to get over, and I hope that as NSU, we were able to show that, one, we have gotten over them,” Kikuta continued. “And two, that they’re there. They’re part of our history. And they are things that we don’t want to see happen again, and I hope that we were able to educate the audience on both of those things.”

Plagmann said highlighting these experiences during Culture Night was to not only honor Japanese-American heritage but also to foster solidarity among other cultural and ethnic identities.

“Each ethnic community in the U.S. has a really deep history — they have all these unique experiences: how they immigrated here, how they adapted with all of these obstacles of American white society. But when you’re showcasing Japanese-American history in particular, we really want to point out not just the resilience of our community, but also to show that these injustices in the past happened a lot of times,” Plagmann said.

Plagmann added that it is important to not only engage in dialogue, but preserve the memories of previous generations.

“We, as our generation, need to keep these memories alive, to make sure that nothing like this ever happens again, but also to reinforce this pan-ethnic solidarity. We need to come together to make sure that nothing like that happens again, coming together, supporting each other and working together, so that we could really create a path for unity,” she continued.