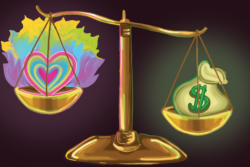 You don’t need to refer to your old mock trial notes for this one because this is a classic case you won’t forget. Do you dive headfirst into what you truly desire, neglecting a safety net (e.g., “La La Land” or “tick, tick … BOOM!”), or do you take the safe route with guaranteed financial stability? For many people, this debate begins with their prospective major in college but for others, it begins long before that.

Before I begin, I want to acknowledge the immense privilege that I already have. Having the option of pursuing higher education is a gift in and of itself and it is not something that I take for granted. I understand that while the debate between passion and profit is a common experience, but many people have no choice in the matter due to factors like socioeconomic status and home life. That being said, I hope this article illuminates a collective experience that many students, like myself, go through.

Ever since the concept of a college major had entered my awareness, I had decided that mine would be English. My reasoning was simple: Writing has always consumed my life, reading was my favorite activity — second only to writing — and English was my favorite school subject (you know, back when everything was simplified into the four domains of English, history, math and science).

I had devised a master plan:

In hindsight, it was quite an expensive master plan.

At the time of devising this plan, I had reached the highly mature age of 12. And as a 12-year-old, it was my self-appointed responsibility to be as loud as possible about practically everything. So, when I repeatedly informed my father about my genius idea, he experienced something akin to heart palpitations.

Let me tell you about my father. He grew up middle class and eventually immigrated to the United States from India. He’s self-taught with cameras, a connoisseur of film and photography, an avid reader and can out “film bro” your resident “film bro.” These are all pursuits outside of his job as a program director. All in all, he embodies the classic immigrant story: the lived experience of working hard to get where you’re at. With the immigrant story comes the immigrant mindset: Above all, your priority must be to financially support yourself.

My father believed, in his bones, that it would be extremely difficult, bordering on impossible, to obtain financial security with a humanities degree.

But, I’d always wanted to star in my own “Mission: Impossible” movie.

As the years went on, I maintained that I would forge onward with my plan. My dad brushed me off, treating my academic interest as a mere phase that I could pipeline into a hobby once I grew up.

I knew he’d seen people who dove headfirst into their passion, just to watch them drown.

But I also knew that I always was, and still am, incredibly passionate about writing: it’s my entire life. I know that there’s nothing like the feeling I get when I’m caught up in a project, my mind moving with the cadence of my words. I know these things, but I often questioned if he ever did.

Combine his protective instinct with the mindset that “tough love” sets them straight, and you’ve got a fight erupting anytime I so much as mention the word “English.” Or, when my father spontaneously says, “You know you’re getting an MBA, right?”

This is the conversation, every time.

My father, representing profit: The humanities are a dead field already. Fewer and fewer people are getting humanities degrees. It is incredibly difficult to find a well-paying job with an English degree, and the limited well-paying jobs are highly competitive and require you to go through extensive schooling. [Insert family friend I’ve never met in my life] majored in the humanities and they’re struggling to find a job! Do you want that to be you? I’ll send you this article about how AI software can write articles better than most people, and soon enough your job will be obsolete!

Or, something like that. And sure, hearing it all right now might make sense, but will it make sense when my soul is dying from the inside out? I didn’t think so.

Myself, representing passion: Humanities degrees are incredibly useful. They are a masterclass in reading, writing, critical thinking, content analysis and creativity. There are many opportunities for an English major, like publishing, journalism and even marketing! If 10 years in the future, I’m making $200,000 at some job that I hate, I’ll curse myself for never having even tried to do the thing I love.

My mother comes from a similar background as my father and, as a result, has a similar mindset. However, as the eternal peacemaker of the family, she’s much more sympathetic toward my passion, which leaves her caught in the middle more often than not.

If these relentless screaming matches have taught me anything, it’s that profit is not the villain of this story, but rather a harsh reality that we are forced to consider. Sometimes it doesn’t work out. “Sometimes” might be generous, actually. It’s more likely that people who “dive in” headfirst don’t end up with what they had imagined at the beginning, but rather a whole lot of debt and stomped-on dreams. Of course, this may read very cynical, but it is still immensely important to consider the reality of the situation. My father urged me to listen to the source, to the vast amount of people who pursued degrees they now regret.

Fast forward to college application and decision season. In other words, we’ve arrived at one of the most excruciating decisions of my life, torn between two wonderfully different schools and two conflicting majors. It was entirely my own decision to attend UC Santa Barbara and I don’t regret it. However, in this case, UCSB was actually the “profit” side of the debate.

My major, communication, is the best of both worlds.

I wanted to explore my varied interests and challenge myself outside of the classroom. I joined the Daily Nexus to continue my writing, as well as the American Marketing Association (AMA) and the business team of the Society of Automotive Engineers (SAE). I genuinely love all of it.

My father and I were still both somewhat unsatisfied for completely different reasons. While I craved the fulfillment of my literary desires, my father now began to worry that communication erred too much on the side of passion and feared that I would not be able to find a job once I graduated.

We both had a synchronized lightbulb moment: the much sought-after double major! I could double in English, therefore fulfilling my creative desires. My father, on the other hand, was thinking economics.

And, for once in my 18 years of existence, I wasn’t entirely opposed to his suggestion. I liked the work I was doing with AMA and SAE, and a degree in economics would only enhance my experience and my job prospects. And no, I wasn’t at all motivated by the fact that one of my favorite movie characters of all time is an econ major, absolutely not.

This shift in my mindset triggered a comically large dosage of cognitive dissonance, wherein I defensively justified choices that I hadn’t even made yet. While I was taking Econ 1 last quarter, I kept trying to tell myself that I enjoyed it, that it was interesting to me, that I was going to do this. I would find a great, well-paying job and the extra respect from my peers and mentors would just be a small bonus. My professor was great and the material was interesting to me at times, but there was a nagging voice in the back of my head telling me that I was giving up on my dream. I hadn’t felt like I was selling out until just right then, right when I saw the major sheet and thought, “Alright, I’ll do this.”

I didn’t hate economics — it wasn’t that simple — but I knew that if I continued to neglect my true desires, I would. And the idea that I could hate an aspect of my education, something that I valued so deeply and strongly, something that I had associated with electric passion and immense satisfaction, was intolerable.

So, I changed my mind. Again.

I decided that I would dive, but not without a safety net. I’m not entirely sure what that means for myself just yet, but I’m ready to find out.

And I know that sounds so lame, because the allure of diving into your passion is the idea that you’ve really got nothing else to turn to. You’ve given everything up for your one true love, just like Jonathan Larson and Mia Dolan. You’re all-in.

But, I really do think you can still be all-in while taking care of yourself. I could make a joke here about we can’t afford to do so “in this economy,” but I came to the realization that it’s so undeniably true that it wouldn’t even be funny. We really can’t.

You can, and should, pursue both passion and profit. We need both. Having both means something different for everyone. It’s tough to navigate and balance, but it’s highly necessary. Not only does it alleviate the all-consuming anxiety of “what you will do with your life if this whole creative thing doesn’t work out,” but it also broadens your perspective, skillset and experiences.

And years down the line, when I have this all figured out, I hope that I can sit down with my father over coffee and laugh about the trials and tribulations we put each other through and how it was both so crucial and insignificant at the same time because, I made it.

Whatever that means, anyway.

Amitha Bhat implores you to try to dodge the false dichotomy of passion v. profit because you can have both, and you should.