The Daily Nexus
Nexustentialism
It's satire, stupid.
Whoopee! The Four Winds Have Arrived in I.V. To Forsake Us All
May 12, 2022 at 4:20 am by Meel F. Lover 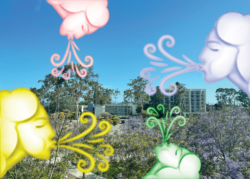 The sleepy town of Isla Vista has been brutally awoken by the wrath of our ancestors, culminating in the angry gusts of wind blowing to and fro. Cursed forever by our gal pal Platform Holly and her fun little extractions of natural resources, the revenge of the big-green-nature gods is upon us in the form of a constant state of wind advisory. After sending a correspondent into the sky via the slingshot we rented from a carnival company, we have received input from the four winds and their thoughts on their massive blowings and whooshes bombarding our little self-involved Isla Vistans.

Our correspondent found the North Wind high up in the swirly wind storm, scowling down at him. “You mortals have been very bad, and you deserve to be punished,” the North Wind declared. “How shall we continue to assert our dominance as the gods of wind without the submission of the meek beings bound to the earth who are destined to be controlled?” The South Wind, hearing this, looked over and whooshed straight toward our correspondent to give him a piece of their mind. “Y’all grounders gettin’ real sure of yourselves down there, paradin’ around with your fuckin’ legs and your pesky feet like y’all own the place,” the South Wind grumbled. Our correspondent flinched as the wind’s spit landed on his face, his body quivering below the two gods.

Soon enough, the West Wind wanted to have a say in what was going on, stating, “I think what, like, we’re really here to do is somehow, like, blow all of the oil out of the ocean. Y’know?” Our correspondent nodded in agreement. The other winds rolled their eye holes. The East Wind accompanied the West and bellowed before him, “You guys love underestimating the wind, you think we’re just these nice little breezes. Well, we can really turn shit up! You ever hear of a tornado? Haha, you’d better hope I don’t give you my best fucking gust!”

After conversing with these esteemed winds, our correspondent fell back down to Earth and has determined that things have quite literally been blown out of proportion. Numerous reports have come in describing bikers being blown into the sky, desperately trying to pedal away mid-air, as well as unsuspecting pedestrians summer salting away in the wind like tumbleweeds. We at Nexustentialism suggest embracing one’s inner sub and bend — I mean, bow down to these forces of nature, allowing them to woosh you as hard as they can!

Meel F. Lover hopes that the four winds will take her to live in their little wind castle in the sky.