The Middle Eastern, North African, South Asian Resource Center hosted its annual culture week from May 7-13 to celebrate the region’s diversity of cultures and offer spaces of community and solidarity for UC Santa Barbara students. 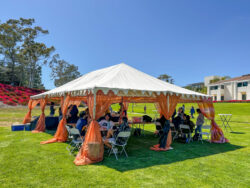 The MENASA Bazaar, an annual fixture of the center’s programming held on May 10, reflected a collaboration of student organizations for a day of cultural activities, festivities and food catered by Masala Spice. Nisha Malley / Daily Nexus

The Middle Eastern, North African, South Asian (MENASA) Culture Week began with an Arab Culture Night on May 7 at 7 p.m. in the Isla Vista Community Center. Organized by Arab Student Group, Students for Justice in Palestine and Lebanese Social Club, the event included a DJ, Arabic music, cultural foods and a performance from Art of Freedom Dabke Troupe — a Palestinian dance group based in Ohio.

Third-year sociology and Middle East studies double major Leila Katibah works as a peer mentor for MENASA and serves as the president of Arab Student Group.

“I had multiple people come up to me and say it was their funnest night of the quarter, because it was a social and cultural event, and I feel like that’s rare especially because we’re such a minority,” she said.

A CommuniTEAS of Care event followed on May 9 at 7 p.m. in the Anacapa Main Lounge for students to engage in solidarity with other MENASA cultures and prioritize collective-individual wellness. MENASA co-hosted the event with the MultiCultural Center and the Asian Pacific Islander Desi American (APIDA) Scholars, a Living Learning Community at Anacapa Residence Hall. Student attendees practiced self-care through a pebble garden-making activity and held discourse around the topic of mental health.

Ashkon Molaei, a counselor for the UCSB Educational Opportunity Program and a coordinator for the MENASA Resource Center (MENASARC), emphasized the importance of providing culturally sensitive and safe spaces for students with underrepresented identities, as well as access to mental health resources.

Katibah said the event provided an effective and impactful outlet for students to comfortably and vulnerably share their experiences.

“I feel like a lot of people got a lot of stuff off their chest. They got to be vulnerable and not ridiculed for it,” Katibah said.

The MENASA Bazaar, an annual fixture of the center’s programming held on May 10, reflected a collaboration of student organizations for a day of cultural activities, festivities and food catered by Masala Spice. Members of UCSB Indus offered henna art services and set up culturally focused crafts stations on tables.

“The bazaar is a student-initiated event that was established by different student organizations coming together in the springtime for tabling events and a time to showcase their organizations,” Molaei said.

Third-year political science major Kiyan Atrian, who works as a MENASARC peer mentor and is a member of the Muslim Student Association, helped organize the event.

“It is an open space for people to learn about our different cultures and engage with respect. However, at the end of the day, spaces like these are for people of Middle Eastern, North African, South Asian heritage because quite frankly, there aren’t a lot of spaces around campus that really center our stories and our histories,” Atrian said. “We don’t want to concede those spaces that we have just for people to lightly dip into our culture.”

The week will culminate with a Queer Trans Asian, Pacific Islander, South and Southwest Asian, North African Potluck on May 13 from 12-2 p.m. in the multipurpose room of Student Resource Building.

Katibah spoke of how MENASARC has provided essential community-building resources to her and other students, such as safe spaces and opportunities for financial and academic guidance as well as personal support.

“It provides a much needed safe space for community and just also a safe space, and I think it’s also provided people with more knowledge on what’s going on on campus in terms of community organizing or affiliated organizations,” Katibah said.

As a multiethnic student, Atrian said that MENASA was the one space on campus to uniquely “bridge both aspects” of their identity.

Atrian reflected on the shared histories of marginalization that Middle East, South Asian and North African groups have experienced.

“Those of us from the Middle East and South Asia and North Africa are severely orientalized by the West, because they view us all as a hegemon even though we are all so different,” Atrian said.

“Here in the West, everyone is individualized, whereas they paint us with broad strokes,” he continued. “So in a way, because of that longtime subjugation, we’ve been able to cultivate community with each other even though there’s distinctions in language, in religion, in heritage, in culture.”

Molaei spoke to the cultural resource center as an opportunity for students to help reclaim their identities and narratives in the face of such marginalization and as an underrepresented community at UCSB.

“There’s so many ways where our cultures maybe are either essentialized, devalued or in some ways denigrated, and there [are] histories of minoritized cultures that are underrepresented going through a struggle with reclaiming our identities,” Molaei said.

He also said that the consolidation of these different identity groups under one center on campus should not impress upon people that they are homogenous in culture or experience.

“I would definitely want to emphasize that in sharing these kinds of events and branding them in a sense as MENASA, we’re not solely trying to say that this is a community in and of itself globally, because MENASA is something that is salient in different spaces,” he said. “Specifically in an American context, being Middle Eastern, North African, [or] South Asian comes with a lot of shared histories of stigma, and that’s really a cause for us to be a community of solidarity.”

Atrian echoed this sentiment, emphasizing the distinctions between the cultural groups that fall under MENASA while still recognizing its opportunities for community and solidarity.

“It’s a way for us to cultivate community amongst each other. Even though our communities are very different, there’s a way that we can share space collectively here,” Atrian said.