The Daily Nexus
Nexustentialism
It's satire, stupid.
God Sends 10 Plagues to Isla Vista After Alleged Cancellation
May 11, 2022 at 4:20 pm by Theresa Harris-Olson Taylor 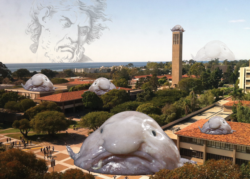 This past week, in the wake of the rare intersection of Easter, Passover and Ramadan, local Isla Vista community members were inspired to cancel God. Esteemed Nexustentialism reporter Roberto Gutierrez discussed this in his article “BREAKING: God Canceled,” but he failed to anticipate the possible ramifications of this cancellation — that being the heavenly father sending 10 plagues into Isla Vista. “No matter how many times we sang, ‘Our God is an awesome God,’ the plagues just kept on coming,” explained a tearful local youth group leader who was persuaded into supporting the cancellation by the promises of premarital sex and a “lesbian lifestyle.”

The first plague ravaged Isla Vista on Monday, April 18, and no one was remotely prepared for it except for perhaps our very own Chancellor Henry T. Yang. It was a plague of 1000 twinks. This was in response to the Isla Vista general public “misbehaving with daddy” (God’s words, not our own). “Before I knew what was happening, I was tackled by a group of skinny white boys and forced into a homemade muscle tank,” a frightened second year reported. This was followed by an outbreak of leprosy the next day. “The leprosy outbreak isn’t affecting my day-to-day life so much,” a local computer science major explained. “Leprosy luckily doesn’t affect green badge status, so I’ve been able to attend all of my classes!” Despite a relatively relaxed reaction to leprosy, there was complete outrage in the wake of the third plague: a weed drought. “I can’t believe God took all of our weed on 4/20,” said Kyle – some guy we found – as he choked back tears.

The following days were no better as God sent widespread erectile dysfunction on Thursday, drained the lagoon on Friday, cancelled the First Amendment on Saturday and sent swarms of blobfish to the coast on Sunday after locals called them “super fucking mid.” In the aftermath of these atrocities, there was widespread panic and rage. “Fuck monotheism,” said a local frat boy who went on to explain the plethora of godly men in his life, including Joe Rogan and Kanye West. “That doctrine is a load of BS. I would kiss the feet of Mr. Rogan or Mr. West any day, but not the feet of this mf, he is overly salty. Do you know how many times Kanye West has been canceled? He didn’t take our weed.”

Kyle then heard that God had sent his Monday plague — any alcohol a frat brother touched turned into water. “I hate the taste of water,” Kyle said, once again holding back tears as his fraternity sweethearts pinned him down and forced water through his chapped and dehydrated lips. “This shit is so fucking rank,” he mustered as tears began to comingle with the water droplets dribbling down his chin.

On the second-to-last day, God took away “catching a fat dome” (his words, not ours). Hundreds of students were seen relentlessly hitting their vapes, but domes were outlawed, and absolutely none were to be caught. Finally, on April 27, God ended his tyranny of plagues with a widespread darkness over the land. “It was heartbreaking,” a group of local girls exclaimed, “it was 80 degrees out, but there was a UV index of 0. We were unable to tan or dayge. I was forced to cross stitch God a quilt by candlelight.”

In the wake of God’s maniacal handiwork, the Isla Vista community has come together and decided to sacrifice one A.S. senator *as a student* to God annually in order to keep the peace. It seems that this will be a successful way to ensure that a slew of plagues are never sent to this quaint little beach town again!