KCSB-FM 91.9 — an independent, educational radio station at UC Santa Barbara — celebrated its 60th anniversary on April 30 in Storke Plaza during the All Gaucho Reunion alumni weekend. 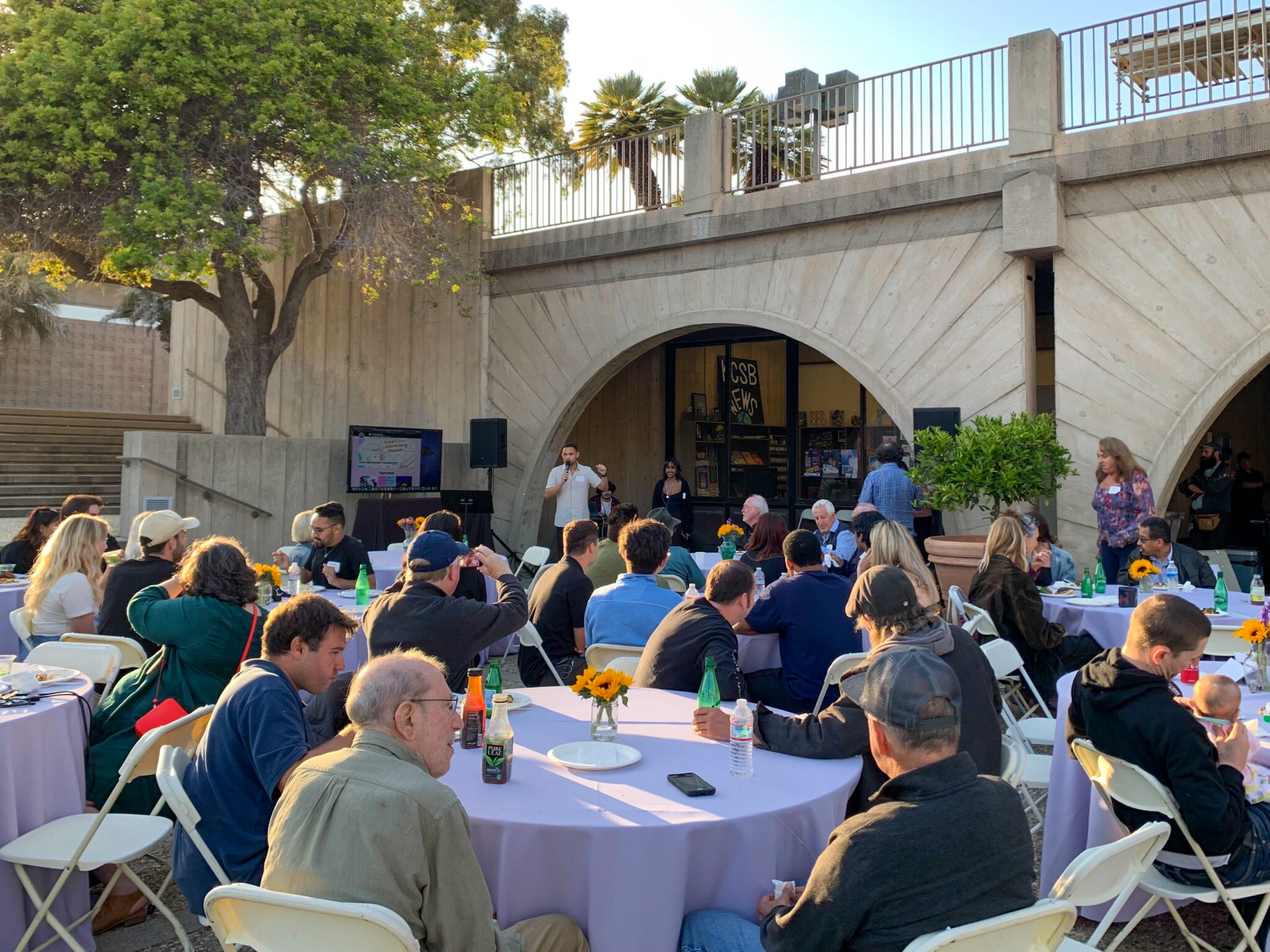 As part of the event, UCSB students and alumni toured KCSB’s facilities and attended a banquet that celebrated the founding of KCSB and the radio station’s history.

UCSB alumnus Bill Harrison founded the KCSB-FM radio station in 1962, originally naming it Navajo Radio after the hallway in the Anacapa Residence hall where he resided.

Harrison said his initial attempts to establish a campus radio station were met with doubt and discouragement from the Speech and Drama department.

“I virtually saw no encouragement or support from the Speech and Drama department,” Harrison said during his speech at the banquet. “I had anticipated they would have interest, but instead the one faculty member who taught anything relevant to broadcasting told me to abandon this project because he thought it was a waste of my time: ‘It would surely die as soon as I left.’ Well, you can imagine that I didn’t get deterred by this attitude.”

Harrison went on to gain the support of then-UCSB Chancellor Vernon Cheadle and filed paperwork to establish KCSB as an FM rather than an AM, a differentiation that allowed it to have a larger broadcasting range.

In its beginning, KCSB had a very limited broadcasting range and hours of operation, Harrison said. However, several pivotal events early in KCSB’s history, such as the station’s coverage of the Kennedy Assassination and the 1970 Isla Vista riots, led the station to establish itself as an important news source to the student body.

“The [Kennedy] assassination event happened on Friday, November 22, 1963. Being so close to the end of the semester, a lot of exams had been scheduled in the following few days before the Christmas holidays,” Harrison said. “Because of the assassination, many of those exams were postponed or otherwise rescheduled. This would be of significance for most of the students on campus. KCSB was the only locus for accumulating and sharing changes regarding important classroom activity.”

The 1970 Isla Vista riots marked another pivotal moment in KCSB reporting history. The riots, sparked by a clash between the Santa Barbara County Sheriff’s Department and anti-war protestors, cumulated in the burning of the Bank of America on Feb. 25, 1970, in Isla Vista — the area where Embarcadero Hall now stands.

UCSB alumnus Cyrus Godfrey joined KCSB in 1967 and became the general manager of the station in 1970, the same year of the Isla Vista riots.

Godfrey described how the Sheriff of Santa Barbara shut down KCSB after protestors burned down the Bank of America.

“This is the only radio station or television station in the United States in its entire history to have been ordered to be shut down by law enforcement,” Godfrey said.

Tim Owens, who DJ’ed for KCSB from 1967-69 before taking over Godfrey’s role as the general manager in 1970, said that the Sheriff illegally made the order to shut down KCSB.

Owens also served as the general manager when the Santa Barbara National Guard Armory was bombed in October 1970.

“We received a letter mailed to KCSB. It had all these letters cut out saying, ‘We are the such-and-such organization, and we’re now taking full responsibility for the armory explosion. Find us if you can,’” Owens said. “Well, I broadcast that on the air and then went home that night. The next thing I know, it’s the FBI [at my door]. And they say, ‘Give us the letter,’ so I gave them a copy of the letter.”

As the event celebrated the history of KCSB, event organizers — Assistant Director for Independent Media Jennifer Kiser and KCSB Advisor Ted Coe — also focused on bringing the KCSB community together following the gradual return of normalcy from COVID-19 restrictions.

“[The pandemic] also has a psychological impact. It separated people, and what this radio community can do is actually bring people together,” Kiser said. “It has that power, but we had been separated for so long, so I think there was a commitment to make sure we did something.”

A large part of KCSB’s community building also involves alumni-student connections and the preservation of KCSB’s 60-year legacy, according to Kiser.

“The programmers who had been remote, the students who had been remote all this time, didn’t benefit from that intergenerational experience that we have here,” Kiser said. “That’s something beautiful about our radio station. We have programmers in their 70s and older, so that intergenerational community experience was missing for the students who had to program during COVID during the pandemic.”

Coe said that part of the reason KCSB has such a strong connection with its alumni is that many of them view the station as a central part of their college education.

“I’ve been here quite a while now, more than 20 years, and we’ve been building [KCSB] and maintaining it to the best of our ability,” Coe said. “[Alums] really value the education they got, and these studios around this building, and working in broadcast, and the connection they made with listeners … A lot of them say that it had more impact on them than their studies.”

Owens echoed this sentiment, saying that the creative freedom and education he enjoyed at KCSB helped prepare him for a career at NPR, where he worked for 25 years as a reporter and Jazz producer.

“KCSB was my springboard,” Owens said. “To have the freedom and flexibility to play in the studio really helped me get self-taught in editing and also learn how to mix different audio elements, and then just be creative. I think that’s one of the hallmarks of KCSB — you could be creative. It was a blank canvas when we came here.”

Current students involved in KCSB also shared Owens’ view that the program allowed them to grow as individuals and as creatives.

“[KCSB] opened up a whole new avenue of possibilities, career-wise and also hobby-wise,” said Zena Omar, KCSB general manager and a fourth-year history of public policy and law major. “I love UCSB, but when I first got here, it was kind of hard for me to find a place where I really felt like I fit in, and the station is just so open to everyone and really emphasizes that.”

“KCSB was my home, it was consistent, and it’s something that I was able to get good at and feel comfortable here,” she continued. “And it sort of became a sanctuary so I would say that’s what really contributed to my learning experience — a safe space where I feel accepted and like I fit in.”

Fourth-year psychological & brain sciences major and KCSB Program Director Diana Escamilla described the impact that the station had on her throughout her tenure.

“It’s had the biggest role out of probably any of my endeavors at UCSB because that’s where I met my friends, my core friend group here who has really supported me and kept me grounded through college,” Escamilla said. “They just have this awesome connection, and they’re really good, good friends, and I’m really grateful to have met them because I feel like they’ve enriched my college experience so much.”

Kiser emphasized the importance of preserving independent news organizations, reflecting on the impact KCSB has played in shaping the college experience and education of its staff and listeners.

“Independent media is worth supporting,” Kiser said. “We need to teach people about media literacy so that they can go out in the world and know what it is and be more discerning when they consume media.”