The UC Santa Barbara Office of Black Student Development celebrated the opening of its office suite — which offers a physical space to support and advocate for Black students — with an open house on April 30. 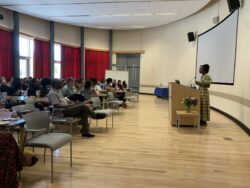 The event began with a tour of the space and opportunities for conversation with the OBSD staff, followed by a speaker lineup in the SRB theater. Nisha Malley / Daily Nexus

OBSD held a virtual community preview of the office suite over Zoom on Feb. 19. Located in the Student Resource Building (SRB), the suite now houses individual offices for staff personnel, a multifunctional community workspace and a breakroom stocked with pantry items.

The event began with a tour of the space and opportunities for conversation with the OBSD staff, followed by a speaker lineup in the SRB theater.

“I thought it was really beautiful to have so many generations of folks here from our parents, students, alumni, student activists and our Black faculty and staff and other campus partners,” Louis said.

Third-year English major Haeli Ross said she attended the open house to witness the resources available to her firsthand and emphasized the importance of having a space to facilitate the support of Black student life on campus.

“Advocating for Black lives and advocating for spaces for us is literally just basic human rights, so why would you not want to be for that?” they said.

Ross said that, as a Black woman, they anticipate utilizing the resources of both OBSD and the UCSB Women’s Center, adding that the establishment of the OBSD helps meet a critical need amongst students.

“We already have the [African diasporic Cultural Resource Center] AdCRC. That is a space for us to come and study in the SRB, but having the Office of Black Student Development that is literally not just a study space but a place that we can go to for advice or help from other Black people that are on campus is really, really nice,” Ross said.

Yang provided remarks at the event, recognizing the activism efforts of Black staff, students and alumni.

“Your courageous determination and activism have advanced our commitment to diversity, excellence, equity and inclusion,” Yang said. “The call for equity and justice that we have witnessed over the past several years across our nation makes our continued commitment ever more urgent.”

In 2019, Yang approved the BSU’s demands for the OBSD space, saying that he would “work toward the vision of a Center for Black Student Development over the next several years.”

“The Office of Black Student Development plays a very key role in supporting Black life on campus and is dedicated to supporting the academic success of our students by providing resources, creating and innovating such a special learning environment and building a sense of belonging,” Yang said.

Louis then introduced the recipients of the Vision Fellowship, an OBSD scholarship to fund students’ passion projects, from creative podcasts to garden installations.

Fourth-year environmental studies major Aminah Hanif-Cruz, who is currently a participant in the fellowship program, explained her project to design and install a vertical garden in the OBSD suite to promote environmental sustainability and mental wellbeing.

Second-year communication and sociology double major Marina Habib — another Vision Fellow — described the launch of her endeavor, a podcast that delves into “the beauty politics behind being a Black woman and the colorism, the racism they face on a daily basis.”

Third-year chemistry major and Vision Fellow Samhal Asfaw said for her project, she is producing a YouTube channel centered around Black female wellness.

“I’ve been journaling independently for myself in the past, like, four or five years, and that’s been a really big form of self-care,” she said. “That being said, I’ve noticed in my practice, I hid all my great ideas and thoughts in my Notes app, and I want to put [them] into reality and actually put [them] into physical practice and keep myself accountable.”

Jena Pruitt, a 2014 UCSB graduate and member of the 2013 BSU Demands Team, also spoke to the crowd. She reflected on the instrumental role that her past advocacy work played in the creation of OBSD.

“The seeds for this were planted years ago, almost 10 years ago, and these are just the blossoms, the flowers that we get to see now,” she said. “The seeds have been long planted in rich soil that we’ve all nourished, that this community has nourished, that alumni have nourished and now you have the opportunity to nourish. And I don’t want you to take that responsibility lightly.”

Louis said that the opening of the new office suite does not mark the end of the efforts to establish spaces for Black students on campus, alluding to the unmet 2019 BSU demand to construct a stand-alone building devoted to Black student development.

“Remember that this is a temporary space because we need a larger space in the future,” Louis said. “A part of the BSU Demands Team demands is to have a stand-alone building and a large space for Black students, so I hope that this is the start of that — of what’s to come.”

According to Louis, the suite previously functioned as a computer lab and lacks the sufficient capacity for OBSD to hold larger events or serve a large number of students in the space.

“This used to be the computer lab but now it’s housing our staff,” she said. “It’s only so big, and so with a larger space, we’ll be able to welcome more students, staff, community members, faculty — to be able to do more in the space.”

Ross echoed a similar sentiment, describing the location of the OBSD suite as an “afterthought” of administration.

“Just having that space for us, it’s really nice to know that it’s there, even though it is an afterthought for us to have it here [in the SRB],” Ross said.

Louis said she hopes students utilize the newly opened office as a place to study, receive academic advising and connect with the staff and the broader Black community.

“It’s been pretty amazing. The office has never had so many people in that room because we recently opened, and so I’m looking forward to people filling up that space and utilizing it for whatever they need — studying, events, building community and engaging.”

She also encouraged the student community to continue their activism work.

“Student activism is really important, and I hope that Black students of today remember that and remember their power and use their voice in their personal lives, academically and as they graduate from UCSB and beyond.”