In a display of support for abortion rights and in protest of the United States Supreme Court’s intention to overturn Roe v. Wade, hundreds rallied at the De La Guerra Plaza in downtown Santa Barbara on May 3 for a march organized by Planned Parenthood. 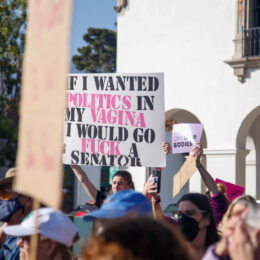 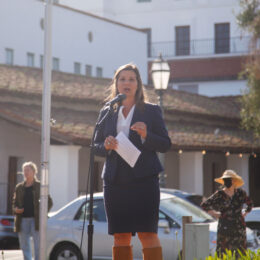 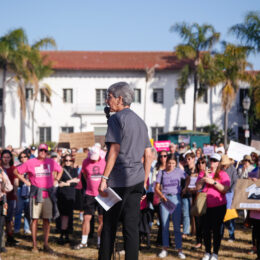 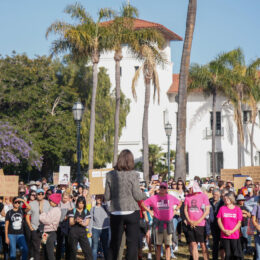 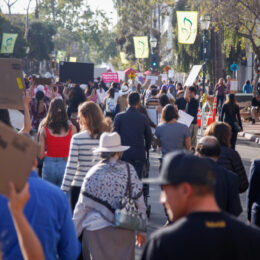 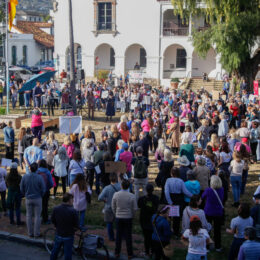 The leak was confirmed as real by the Supreme Court shortly after it was released and immediately sparked national outrage, with California Governor Gavin Newsom promising to preserve the right to abortion in the state constitution.

“Overnight, our team at Planned Parenthood, along with partners and supporters all across the Central Coast, organized or supported rapid response rallies that are happening right now in five different locations across three counties,” she said.

President and CEO of Planned Parenthood California Central Coast Jenna Tosh said that the Politico leak confirmed the program’s preexisting fears that the court would strike down Roe v. Wade.

“A leak from Politico confirmed our worst fears, which is that the Supreme Court is gearing up to overrule 50 years of precedent and overturn the Roe v. Wade court decision, which established the right to safely and legally end a pregnancy in this country,” Tosh said. “I want to be clear that this is just a draft. It’s not the final ruling. Roe v. Wade is still the law of the land, but this is really an ominous warning.”

Reyes-Martín told the crowd to respond to the court’s decision by sharing their stories and donating to Planned Parenthood.

Bertrand volunteers at the Planned Parenthood Central Coast Action Fund and said that the vote represents the will of special interest groups and Trump-appointed justices.

“We’re here tonight to say that our country must not go backwards. For almost 50 years, the right to safe and legal abortion has been constitutionally protected,” he said. “The conservative majority on the Supreme Court, including three Trump justices, is advancing decades of work by special interests committed to overturning Roe and banning abortion.

“We need to get out the vote, both in June and November, and call on our policymakers at every level of government to stand up for reproductive justice,” Bertrand continued.

Hartmann spoke to the crowd about the importance of upholding the right to bodily autonomy.

“You cannot be an independent woman if you can’t have a say about when you’re going to have a child,” Hartmann said. “I can’t see how any of the other rights we have — freedom of speech, freedom of religion — [are safe] if you don’t have autonomy over your own physical person.”

Hundreds of rally goers marched down State Street after speeches concluded, yelling, “My body, my choice,” and other chants.

Tosh said that the event demonstrated the massive support for women’s reproductive rights and that Planned Parenthood California Central Coast is working to mobilize voters and volunteers to combat the court’s decision.

“Folks are waking up to realize that fundamental rights are at risk in this country,” Tosh said. “We’re urging them to get involved as volunteers, reach out to their local Planned Parenthood health center, certainly establish their voter registration if they haven’t already and, if people are able to, donate to Planned Parenthood and to abortion funds to support the right of every person.”