UC Santa Barbara baseball has been on a tear in recent weeks as they stand alone in first place in the Big West standings. Just recently, the Gauchos completed a 3-game sweep of the Long Beach State Dirtbags and improved their record to 27-9 in the process. Currently, UCSB’s conference record is a spectacular 16-2. 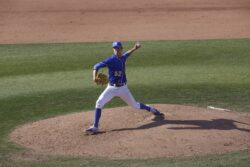 After snapping their 6-game winning streak in a 4-14 loss to the No. 14 UC Los Angeles Bruins, the Gauchos stayed in Santa Barbara to begin their series against Long Beach. UCSB set the tone of the series immediately with a dominant showing. After a scoreless first inning for both teams, the Gauchos took advantage of their potent offense and their opponent’s mistakes to jump out to a 6-0 lead. UCSB hit 2 triples in the inning and a bases-clearing double to begin their blowout. As the game continued, Long Beach struggled to get any offensive momentum, as Gaucho pitcher Cory Lewis was perfect through 5 innings. Before Long Beach could get a single runner on base, UCSB tacked on 3 more runs in the fourth inning. The Dirtbags scored their only runs in the fifth inning as they broke up Lewis’ perfect game. However, UCSB did not let up and cruised to an opening victory of 14-2.

The second game of the series was an outlier, as it was a low-scoring matchup and closely contested throughout. Again, it was UCSB who struck first, as they scored 2 runs in the third inning via the first home run of John Newman Jr.’s career and another solo homer from Blake Klassen. The next 3 innings were scoreless for both teams as Long Beach attempted to chip away at the lead. It was the Dirtbags who ended the scoring drought with a 2-run inning in the seventh. The tied game only lasted for a few outs as the Gauchos drove in the go-ahead run in the bottom of the seventh inning with an RBI single from Bryce Willits. This 3-2 scoreline would end up being the final score as the Gauchos ended the day with their second win of the series.

In the final game of the series, the Gauchos went back to their domination of Long Beach. Again, UCSB jumped out to a large lead early in the game with a 5-run second inning. In the inning, every run was scored with 2 outs and Klassen hit a 2-run home run to extend the lead to 5-0. After quickly retiring the Dirtbags in the top of the third inning, the Gauchos scored 2 more runs to make it a 7-0 game. In this inning, Nick Vogt hit a solo home run. For the rest of the game, the Gauchos scored 3 more runs, and Long Beach scored their lone run of the day in the final inning of the game. The final score was 10-1 as UCSB completed the sweep and secured a 3-game winning streak.

On Tuesday, the Gauchos will take on the USC Trojans in Los Angeles. Afterward, they will travel to San Luis Obispo for the weekend to continue conference play against the Cal Poly Mustangs. The stakes will be high as the Mustangs look to dethrone UCSB from first place in the Big West