The Daily Nexus
News
Lee Airton Lectures About Being Non-Binary in Gender-Binaric World
April 21, 2022 at 10:30 am by Asumi Shuda

UC Santa Barbara’s MultiCultural Center hosted speaker Lee Airton on April 19 for “Wonderful/Terrible: Being Non-Binary in a World Still Trying to Figure Out What That Means” — a talk and book-signing event featuring Airton’s 2018 book, “Gender: Your Guide: A Gender-Friendly Primer on What to Know, What to Say, and What to Do in the New Gender Culture.” 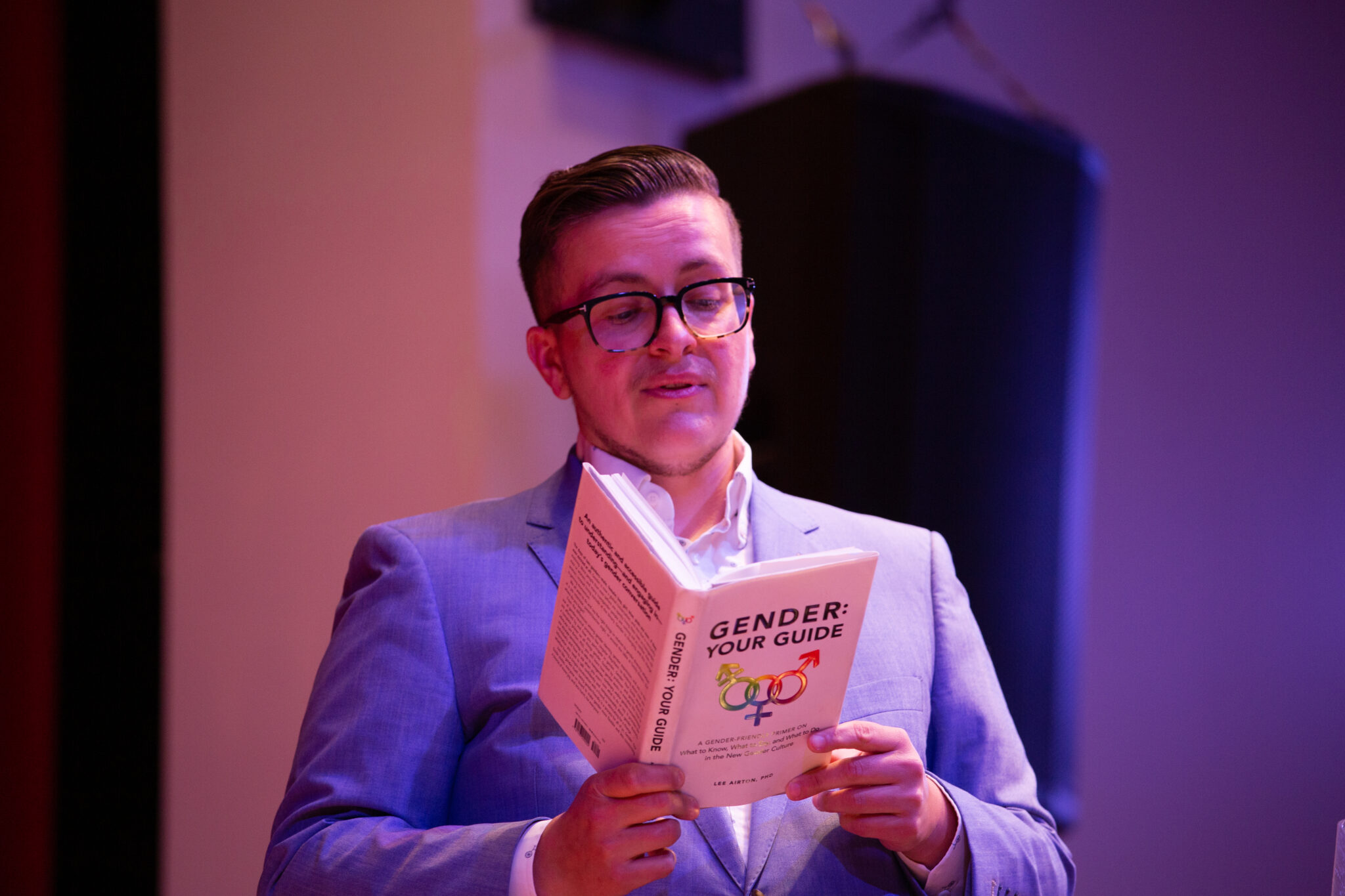 Lee Airton is a transgender and non-binary assistant professor of gender and sexuality studies in education at Queen’s University. Maddy Fangio / Daily Nexus

The event was co-hosted with the Resource Center for Sexual and Gender Diversity (RCSGD).

Airton is a transgender and non-binary assistant professor of gender and sexuality studies in education at Queen’s University. Their other work includes founding the first Q&A-based blog about gender-neutral pronoun usage in 2012 called They is My Pronoun and a national social media initiative called the “No Big Deal Campaign” to show support for transgender peoples’ right to have their correct pronouns used.

Airton’s debut book explores the tangible steps toward welcoming gender diversity and inclusivity into everyday life. The book has been adopted as a professional development piece in education.

Director of LGBT Resources at RCSGD Quinn Rioz spoke to the vision behind this lecture as a part of RCSGD’s third annual Trans Week of Visibility — a week to “celebrate and uplift trans joy, excellence and experiences.”

“We really wanted to bring someone who can … talk about what it means to be non-binary, and Dr. Airton was one of the first trans educators that really talked about the importance of supporting non-binary students in higher education,” they said.

Rioz emphasized the importance of having speakers like Airton come in to speak to students in the LGBTQIA+ community.

“It was so important for us to bring in a trans, non-binary educator whose career and life’s work is educating people on what it means to be trans and non-binary and how to make campuses more gender friendly to non-binary students,” they said.

Rioz introduced Airton before they spoke and described being moved by Airton’s book after they came out as transgender and non-binary in 2017.

“It was a time when non-binary was not really well-known or understood,” Rioz said during the event. “Reading Dr. Airton’s book as an aspiring trans educator gave me the language to feeling non-binary and gave me tools to invite people in my life both professionally and personally.”

Airton began their speech by saying that although they’re 38 years old, their true age of being authentically out and themself is 11 years.

Airton spoke to the importance of understanding that non-binary individuals are not new, but rather the terminology around it is.

“I do have some elders, folks who came to know themselves in a world that didn’t yet have our language to this extent and learn that this is their path,” Airton said.

“We are beginning to know that non-binary people see much younger than our trans men brothers and our trans women sisters … and I think this is because many of us now grew up knowing that non-binary is a gender and a possible life, a very good life,” they continued.

Airton then reminisced about their experience in their early education, laughing about a memory of their fourth-grade teacher who allowed her “star students” to become celebrities by sticking their names written on Post-it notes on posters of male celebrities, such as Billy Ray Cyrus.

“We sat at tables of four or five students, and we would compete for ‘pod points,’” they said. “She had this really big poster of Billy Ray Cyrus … and our names would be put on a Post-it and pasted on Billy Ray Cyrus.”

Airton connected this childhood memory to how children are exposed to ideas about gender early on, as they and their peers were trying to “become” these male celebrities as a reward, no matter what they identified as.

Describing their “most me” moment — or the moment where they felt the most authentically themself — Airton spoke about being 11 years old — which is also their second birthday in being out and themself to the world.

“I would say my ‘most me’ self was me at 11 in my alternative school: short hair, glasses … I was theatrical, was very silly, very sporty,” Airton said.

However, due to social expectations and internalizations of heteronormativity, Airton said they devoted themself to upholding and maintaining a heterosexual, cisgender image throughout high school.

“As an awkward whisper of a teenage girl, I worked so hard,” Airton said. “I devoted myself to a heterosexual girlhood with the same drive that got me through graduate school. I manifested the most intense, all-consuming crushes on very well-selected boys.”

“In the middle of female puberty, I was diagnosed with polycystic ovary syndrome, and I began growing a beard,” Airton said. “When my beard first appeared, it was abundantly clear that it was not to be loved.”

Airton described being forced to wax their beard by their parents and how this experience is one of many where they were forced to assimilate into the gender binary.

“Absolute statements about what women’s bodies and what men’s bodies look like are easily disproved by looking around a crowded room, and yet this diversity most often loses to conventional wisdom, which recognizes only two rigid gender categories for all of these bodies,” they continued.

Airton then moved along their life’s timeline and spoke about embracing the “butch lesbian” image in their mid-20s, and the community reactions to this change in labels and physical presentation. They said people around them perceived them as someone who already “figured themself out.”

“Around this time when I was doing butch, I began to experience people reacting to me with hostility in public spaces for the very first time … and I think what was happening is that I looked too old to be still figuring it out,” Airton said. “I looked like someone who is comfortable, old enough for this to be who I was.”

Airton emphasized that not having a solid answer to one’s gender identity or other parts of themself does not invalidate their experience of finding themselves, and said it is often the absence of the right language to fully express oneself that results in ambiguity in understanding identity.

“My fellow trans folks, you know how hard it is to explain to a very nice cisgender person how you can go through so much of your life not knowing something so fundamental about yourself, like your gender.” Airton said. “But I’ve been non-binary since I’ve had language, I just didn’t have this language.”

Airton said this absence of language in the past and the ongoing configuration of more language for non-heterosexual and cisgender labels are why it is important to take notice of these feelings and not invalidate such thoughts.

“You are telling yourself something about your gender even if no one has the language yet,” they said. “It might be because you’re a little person or because you don’t have the internet, but those feelings can guide us.”

Speaking to their journey of using they/them pronouns, Airton said that she/her pronouns felt out of place for them before the term “non-binary” even entered their vocabulary.

“Even without knowing what’s non-binary, I knew that ‘she/her’ felt odd and out of place, like I was wearing my t-shirt backwards,” Airton said. “I can indeed remember and put my finger on the moment when singular they/them shout out to me like a beacon.”

Airton concluded with the essentiality of being “gender friendly” not only to others but also to oneself and how people must ensure that their own implicit biases and assumptions with gender does not impede on other’s or their own journey toward gender euphoria.

“I spent so much of ‘Gender — My Guide’ convincing my very likely cisgender reader that gender friendly is a good thing for you, and I’d like to spend as much as I have remaining in my life to help my trans people remember to be gender friendly to each other, but even more so to ourselves,” Airton said.