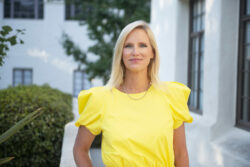 Capps formerly worked as a speechwriter for Bill Clinton, press secretary for John Kerry and communications director for Ted Kennedy.

As an unopposed candidate, Capps will most likely take office come January 2023. Despite not having any opponents, Capps said that she prioritizes running a strong campaign.

“That’s why I’m running a campaign, and I’m not just relying on the fact that I’m unopposed, because I’ve been around politics a long time and I have seen the direct connection between a good campaign and a good public servant,” she continued.

Capps’ campaign is run mostly by students from UC Santa Barbara and Santa Barbara City College, along with one student from UC Berkeley.

“I believe so strongly in mentorship and providing opportunities for students, people who are interested in politics to learn and to have real life [experience],” Capps said. “I campaigned as a young person, and I was grateful for the people that gave me opportunities to jump in and learn.”

Skylar Payab, a UCSB third-year global studies major and a member of Capps’ campaign, is helping to arrange a canvassing event on April 14 that will allow Isla Vista residents to get to know their future representative and voice concerns about various issues affecting the college town. The event will be held at Woodstock’s in I.V. at 6:30 p.m. and is being organized in partnership with UCSB Campus Democrats and the UCSB chapter of Young Democratic Socialists of America.

“I’ll be answering questions, and I want to express my views and my values on things, but what I’m hoping to get out of it and the purpose [of it] is for me … to hear more [from the community],” Capps said.

Capps said that the reason why she’s holding canvassing events in I.V. is to meet the community where they are instead of expecting people to reach out to her.

“Isla Vista and UCSB are really a central part of the 2nd district and one that is crying out for attention and leadership and advocacy,” Capps said.

“Number two would be public safety and feeling safe on a campus environment and surrounding environment and making sure that not only are we providing that students feel safe, but they also feel safe despite the color of their skin and are treated fairly,” Capps continued. “And I’ve heard some to the contrary and I want to understand more.”

Capps is continuing canvassing and trying to understand the issues that impact the 2nd district. Come June, 2nd district residents will be able to vote for the candidate that they believe represents the district best.

A version of this article appeared on p. 5 of the April 14 edition of the Nexus.