The Daily Nexus
Film & TV
“Murder In Paris”: A Story of International Intrigue Comes to the Carsey-Wolf Center
April 15, 2022 at 9:00 am by Gabriel O'Brien 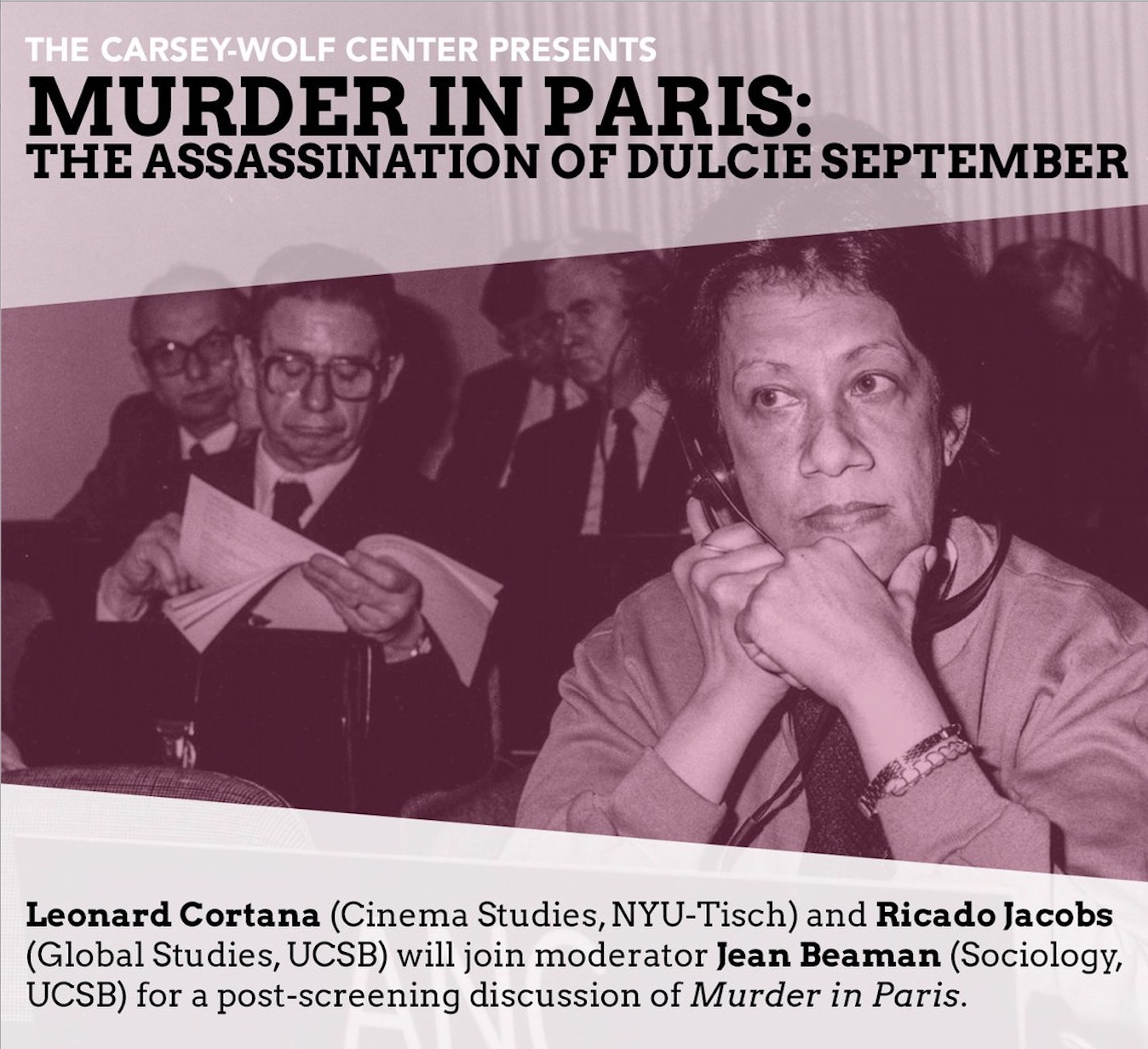 On April 12, at the Pollock Theater, there was a chance to see a recently released documentary about an unfortunately neglected civil rights figure of recent memory — Dulcie September —  as well as to hear experts on the subject discuss the role that she played in the male-dominated struggle against apartheid in depth. The Carsey-Wolf Center, the media department affiliated with UC Santa Barbara which emphasizes a global lens in appreciating the role that media can play for positive change, screened the 2021 documentary “Murder in Paris: The Assassination of Dulcie September” — which documents the life and mysterious death of the eponymous South African activist described as the “heartbeat of the African National Congress in France.”

In order to best understand “Murder in Paris,” the viewer must transport themselves back to South Africa before the early 1990s — when apartheid was still the law of the land. This legal system of segregation prioritized the rights of white South Africans at the expense of the majority native African population. For years, the racial stratification within South Africa may have bred resentment, but there was no outright retaliation until the emergence of the African National Congress (ANC). And while the party would be repressed by the colonial government, and its de facto leader Nelson Mandela would be imprisoned for 27 years, they significantly wore down the power structure in South Africa by the late ‘80s — in large part because of activists like September.

September was a South African-born activist who was imprisoned and eventually exiled because of her compulsion to push back on the apartheid government that her people were forced to endure. Although it may have seemed safer in Paris, France — where the populace seemed more sympathetic to equal rights in South Africa — her untimely death in 1988 proved that things were more complicated than what appeared on the surface.

“Murder in Paris,” directed and produced by Enver Samuel, is structured as a typical documentary film — although its score and visual presentation evoke the feeling that one is watching a whodunit detective mystery. Since the murder is still unsolved, this feeling is obviously validated by what we see on screen. The film jumps back and forth between the past and the present to convey that the legacy of September and apartheid are still alive and persist today.

September, the chief representative of the ANC in France, was a voice of opposition to the status quo which persisted in her home nation and the cooperation that Western nations lent to the apartheid government in South Africa. The Cold War served as a backdrop to September’s life and activism, and retroactive criticisms of France and the United States are present in the documentary for both nations’ cooperation with apartheid South Africa. Much of what we learn about September’s assassination comes from contemporary sources — many of whom were fellow ANC activists and even one South African “super spy.” This talking head’s presence in the documentary serves to provide the same, somewhat distracting idea that the South African government was behind the assassination of September, whom spy Craig Williamson describes as a “soft target” — implying that her routine activities made it easy for her to be a victim of political retribution on the highest scale. Yet, Evelyn Groenink, a Dutch journalist who was close with September, discovers in her own exhaustive research into solving the assassination that the killing may have been at the behest of a seemingly friendly country in France — which had a series of costly military contracts with South Africa.

After the film came to a close, it left viewers with the feeling that more can be done to bring this story to light. There was a Q&A session with New York University scholar Leonard Cortana and UCSB global studies assistant professor Ricado Jacobs, moderated by UCSB sociology associate professor Jean Beaman. Jacobs spoke of how September served as a “hindrance” to the South African government, and Cortana stressed the importance of making sure that September’s activism was not subject to the “erasure” of historical achievements by women or people of color. Cortana — who has studied September’s activism at length for his doctoral research — provided a lasting point that relates to the film’s themes as well as those of any social issue of the day: “We don’t think enough about the role of digital media.” Connecting the success of the anti-apartheid movement or the potential success of any other social movement with digital media, which plays an ever-increasing and sometimes maligned role in our lives, shows how this medium can be used for positive purposes.

“Murder in Paris” is not just an intriguing documentary that sheds light on a figure whose story is often left out of contemporary history but is an unfinished story that still has unanswered questions. Samuel spent four years working on what can be called a passion project of his, and his efforts have paid off. “Murder in Paris” was awarded the Best South African Feature Documentary, it was a Paris International Film Awards winner and has made the rounds at numerous other independent film festivals.

The next stop for Samuels’ film is the New York City Independent Film Festival, which will take place from June 12 to 19, 2022, although it is clear that recognition with awards is not as important to the crew as recognition of the call to action. Public figures in South Africa and France have called for the reopening of the case looking into her murder — with even French President Emmanuel Macron stating, “We will look into [it].” The official website for “Murder in Paris” even provides interested parties an opportunity to sign a petition to officially encourage France to reopen the case. Judging by the fact that September’s name and likeness have become even more prominent, it is not out of the realm of possibility that her assassination could finally see some justice — and the social awareness that “Murder in Paris” cultivates is partially to thank for that.