The Daily Nexus
On the Menu
Best Coffee Shops Near UCSB
April 7, 2022 at 5:25 pm by Sophia Lovell

If you’re a caffeine-addicted, restless studier like myself, you’ve probably been searching for the best coffee shop near UC Santa Barbara. Well, I’m here to tell you that I’ve done the search for you. Many lattes, baked goods and study sessions later — I have for you, the most well-known coffee spots near UCSB (in chronological order of the date of my visit) and my thoughts on each of them.

Hear me out … Bagel Cafe has the best food in Isla Vista. The aroma that surrounds my apartment around 11 p.m. as the kitchen staff prepare the next morning’s bagels is the most heavenly scent I’ve ever smelled.

However … Bagel Cafe was also where I purchased my first ever cup of coffee as a UCSB student. I was determined to live a main character moment my first morning waking up at UCSB, so I decided to go on a walk to a coffee shop. The closest one to my dorm? Bagel Cafe. I had my cute, little walk by the lagoon and arrived to order what I’m sure was an iced vanilla latte with almond milk. An unbearably watery sip, unfortunately, found me extremely disappointed. And so, with a heavy heart, I returned to my dorm room and vowed to never again drink a coffee from Bagel Cafe.

Though, if you’re interested in a nice snack for a morning study session, grab a bagel, and bring your hotspot to finish up that paper at Little Acorn Park.

The classic. This was probably the second coffee spot I ever went to. I won’t talk about the coffee itself too much except to say that you and I both know there’s much better coffee elsewhere (I say, with 400 stars waiting for me in my app).

The UCen Starbucks is a great option in a pinch, especially either on the way to the library or before studying at the abundance of tables in the UCen itself. And the one in I.V.? A great outdoor spot to listen to the mild chatter of I.V. as you work under the Starbucks’ Wi-Fi with your friends. Plus, if you’re a snacky studier like myself, you’re surrounded by an abundance of restaurants.

Cajé is another I.V. classic. It was my introduction to lavender lattes and, for that, I am eternally grateful. And an insider/barista secret? Cajé’s lattes only have two shots of espresso, for both small and large — skip the extra dollar it costs to size up. Their “The Works” bagel is a fan favorite (and by fan, I mean myself). As good as Cajé is, it is a bit expensive for those of us still working minimum wage jobs. If you have an extra couple, or let’s be real, seven dollars to spare, I highly recommend a large lavender oat milk latte with an extra shot of espresso.

I have never, however, tried to study at Cajé, and I’m not sure that I ever will. I study so much better in a relatively quiet area, and the ever flowing hustle and bustle of Cajé is simply not conducive to that. However, I know many people who love Cajé for a study session, so maybe give it a shot if your focus is a bit better than mine.

Old Town Coffee was my first adventure outside the streets of Isla Vista for coffee (shoutout to my car). The environment is perfect for studying; a nice amount of chatter without being too overwhelming. I went with a group, and we found a cute table inside to work at.

At Old Town, I ordered a rose latte because they were out of my previously proclaimed favorite — lavender. This was a barista recommendation, and let me tell you — not my cup of tea, or coffee rather. The quality of the latte itself was good, but the rose flavoring was not for me. Old Town Coffee has a selection of pastries as well. I ordered the poppy seed twist which served as a great satisfaction to my study cravings.

Dune is Santa Barbara’s pride and joy — and in all honesty, I’m not sure why. It’s a cute, little place to grab a snack, but nothing special in my opinion. On my first visit, I ordered the Iced Tres Leches latte, which proved to be a pretty standard, flavorless latte. I haven’t studied at Dune yet, but from my view of the one across from Target, it doesn’t seem the most conducive to studying.

The furthest drive of the bunch but arguably worth it. I went on a Sunday afternoon with a group of friends with plans to study. While our study plans did not pan out as we had intended (we met a very chatty lady who talked to us the whole time we were there), I see how the vibes were quite conducive to a Sunday study moment. My hunger was met with their “veggie toast” whose name does not lend itself nearly enough to the deliciousness that I ate, and my caffeine cravings were satisfied by a quad shot — yes, quad shot — espresso over ice. I suppose that doesn’t allow me to tell you the quality of their coffee menu, but my study buddies were satisfied with their orders as well. 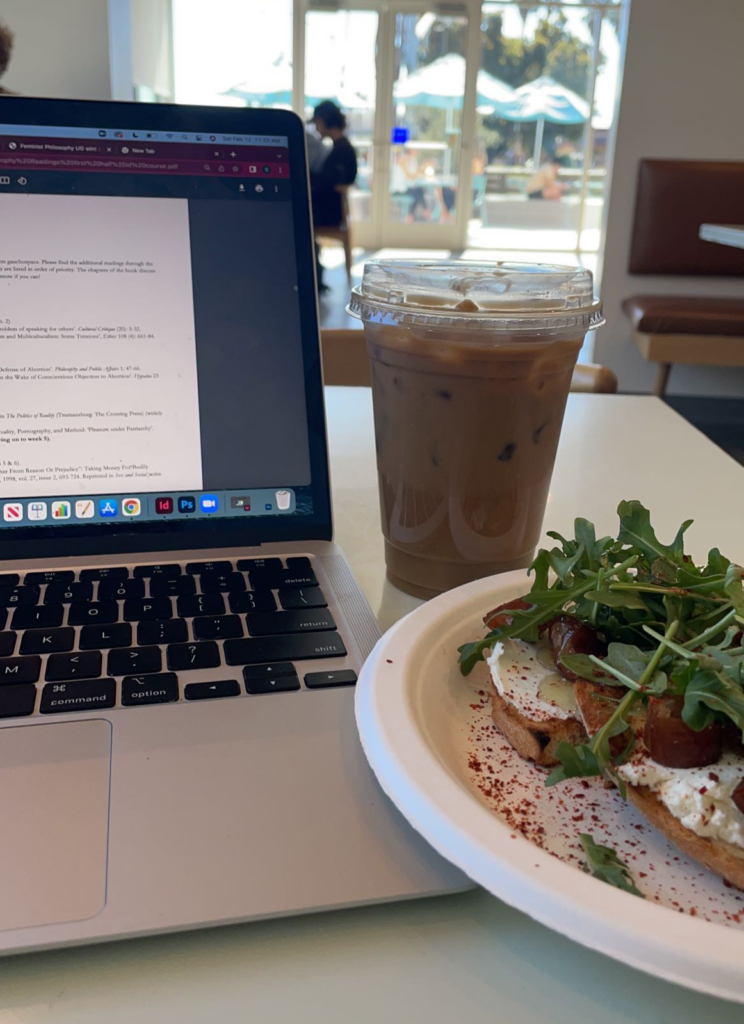 I became a Dean regular this past finals week. In fact, it’s where I’m writing this article! This may just be my favorite option of them all, so much so that I’m hesitant to include it in this article out of fear of giving away my secret spot. But I wouldn’t do that to you; instead, I’ll share. The iced quad shot lavender latte with oat milk is one of the best coffees I’ve ever had. I met the sweetest barista, who complimented my tote, and we had an in depth conversation about our shared love of goat cheese. This isn’t as weird as it sounds as I also ordered the “date with a goat toast,” which is another highly recommended order. The vibe of Dean is bright, airy, fresh and clean — perfect to clear your mind for studying. They have outlets at some of the booths, although those spots fill up quickly. But in anticipation of this, Dean offers portable chargers for their customers!

Lighthouse was highly recommended to me, and I see why. The vibes were very cute and beachy, but not my favorite. The coffee was good, and I ordered a lox bagel which was to die for. However, I don’t think I’ll be returning for a study session any time soon. The benches to sit at weren’t the most comfortable, and the environment just wasn’t giving what I needed it to. I think this would be a good spot to study for a study group where you truly don’t plan to get too much done. We all have those moments, and I feel like Lighthouse may be perfect for it.

No matter where you go, Goleta and Santa Barbara are home to many great coffee options. That being said, I hope to see many of you at Dean on my frequent visits. Happy caffeinating!