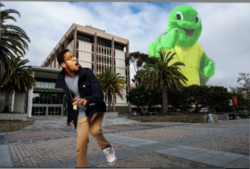 It’s begun. One of UCSB’s most loathed rites of passage: the yearly victimization of a new generation of UCSB students by CALPIRG recruiters. Traumatized and hesitant to walk around campus, new students now live in fear of being indoctrinated into a pyramid scheme under the facade of an environmentalist group.

Being a freshman, I am a little green — pun intended — on the matter, so I walked around campus to talk with more seasoned CALPIRG harassment veterans.

“They’re trying to like gaslight me into saving the environment, which isn’t very cash money of them you know?” said Saraa Nara, a fourth year who is “lowkey tired” of CALPIRG’s bullshit. “I mean go off and girlboss I guess.”

I’m sure we’ve all had our fair share of pushy people. But there’s some exceptional quality that distinguishes CALPIRG from others. Be it their asinine methods to recruit unsuspecting students or, perhaps, their pretentious crusade to piss away their share of student fees, CALPIRG has a knack for murking the integrity of environmentalism.

I spoke to another emotionally distraught student who reportedly was hunted for sport by Tizzy the Turtle. Much to my disdain, I found out that CALPIRG has allegedly devised a new recruitment strategy that employs their infamous mascot.

Out of breath, third-year Enma Graves expressed her disdain for the new facist regime under Tizzy.

“I’m already hustling to finish this year up but add CALPIRG’s bitch-ass turtle on top of that? Fuck dude, I really have motivation to get out now,” Graves said. “I am straight up and downright debilitated from trying to escape that damn turtle.”

On my way to the Arbor, the inevitable inevitably occurred: Tizzy found me. Looming in the skies like a second Storke Tower, the sacrilegious turtle began approaching me at an alarming cadence. I knew then and there that running was futile: Tizzy had a quota to make, and I was a metaphorical hare in a tortoise’s race to manifest a pro-environment campus.

As Tizzy berates me with environmental propaganda, it’s all I can do to beg CALPIRG to stop perceiving students as approachable individuals with fresh-out-of-the-oven fucks to give.

H.L. Adams is currently enjoying her paper straw that became one with her water. Mmm, paper.

The most asine garbage I have ssen WTF is wrong with the Daily Nexus. You think war crimes are funny do you? This co-ed has “no fucks to give”. OK, no tears for the next student crime victim of any sort. Because, Isla Vista UCSB attitude per Daily Nexus. And hire from anywhere but UCSB. DN is a disgrace, just close.