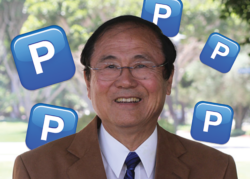 “Pushin P”, a hit song by Gunna and Future featuring Young Thug, has been topping music charts and dominating social media. However, some people have reported confusion about the meaning of “pushin P.” According to Genius, the phrase refers to “keeping it player,” or being true to self. To further explain this concept, look no further than our very own Chancellor Yang. Here are six ways that Yang is truly pushin P.

One of the most perplexing lyrics in the song is “she’s not a lesbian, for P, she turn pesbian.” Allegedly, girls who typically identify as lesbians turn into heterosexuals around Future (who is also known as Pluto, or P). A new study by the UCSB psychology department reveals that 69% of undergraduate lesbians would make an exception for Yang, and 42% agreed that they “wanted his Chancellorussy.”

The lyric, “I rock these presidents,” suggests that presidents may be pushin P. Similarly to presidents, who hold power over a nation, Yang holds power over UCSB.

4. Yang could get a private suite

Due to his wealth, Yang could definitely afford a private suite, which is also referenced in the lyrics.

5. Yang is too rich to text

Later in the song, Young Thug states that he is “too rich to text,” and that his shawty will typically forward it. If you look in your umail inbox, you can see that messages from Yang are sent out by the Office of the Chancellor, where his shawty is undoubtedly located.

In a tweet, Gunna stated that “being loyal is definitely P.” Yang has a wife named Dilling Yang with whom he has been known to take daily walks. Loyal king!

Yang keeps it player by being extremely sexy, rich and powerful. With such a wonderful example right here at UCSB, it is easy to understand the true meaning of pushin P.