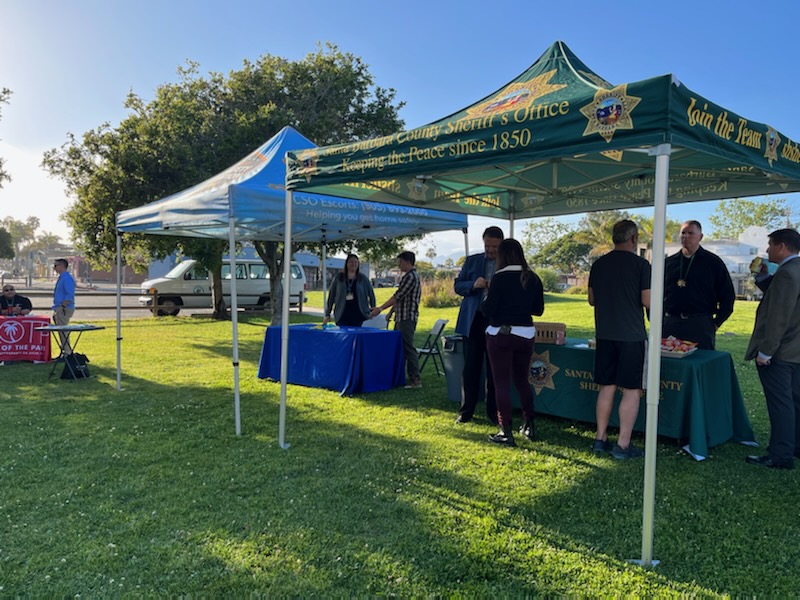 The sheriff’s office used to host informal town halls and forums in Isla Vista with more frequency in the past; however, the pandemic put a two-year halt to such events. Atmika Iyer / Daily Nexus

The purpose of the forum was to provide an opportunity for the Isla Vista community to approach the Santa Barbara County Sheriff’s Office (SBSO) and ask questions or express any safety concerns they might have in I.V.

The forum featured the sheriff’s office, as well as UC Santa Barbara Police Department, Associated Students (A.S.) Program Board, Gauchos for Recovery, UCSB Campus Advocacy and Resources & Education, UCSB Life of the Party, UCSB Counseling & Psychological Services and Standing Together to End Sexual Assault, among others.

The sheriff’s office used to host informal town halls and forums in Isla Vista with more frequency in the past; however, the pandemic put a two-year halt to such events.

Following the serial sexual assaultor and attempted kidnapper in I.V. late during Winter Quarter 2022, SBSO hosted a town hall where community members could ask questions or express safety concerns. SBSO Public Information Officer Raquel Zick said that the goal of this forum was to allow the community to approach law enforcement and other community partners without having a crime or specific event attached to the reasoning.

“We got a lot of feedback from that event and we wanted to kind of repeat that without having a precipitating event, just for an opportunity for community outreach and to connect not only with each other but with our community and provide information about support services and just to have some very casual conversations to address really any concerns that the community members of Isla Vista may have,” Zick said.

“So our goal is to be responsive to the needs of Isla Vista. It’s a very unique community. So it’s important for us to have the opportunity to have these interactions where we listen to the community members, to our fellow community organizations about what the best way to reach this population is,” Zick said.

“You’ll notice that all of the members of the sheriff’s department who are here today working this event, we’re all in casual clothing, because we want to have nice casual conversations that are unstructured.”

SBSO Sheriff Bill Brown said that the advantage of hosting these events is that the student community can not only approach law enforcement, but many university and community agencies — such as Gauchos for Recovery and UCSB Counseling & Psychological Services — for help or to express community concerns.

“The nice part about this is it’s not just the sheriff’s office. It’s all of these other agencies that are also involved in serving and caring for students. They’re here and the resources that they have. So we want to make sure that the young people particularly are aware that these resources are available to them. Everything from sexual assault support [to] mental health,” Brown said.

Brown said that one of the larger issues within Isla Vista and the county at large is fentanyl abuse and overdoses.

“People don’t realize what they’re taking. The fentanyl that is available now is oftentimes in the form of a counterfeit pill; it looks like a legitimate prescription drug. Some people know this must be  Xanax or this must be OxyContin, so I can take that because it’s made by a manufacturer,” Brown said. “It doesn’t have any quality control … but that can sometimes kill people.”

Brown expressed faith in the student community for keeping Deltopia safe and local.

“We are very blessed that we have people that are smart, bright that want to do the right thing. And the lion’s share are really just a pleasure to work. And the troublemakers, the people who would like to push the envelope  — there’s always going to be some of those, but the reality is, you can’t paint everyone with the same brush,” Brown said. “We have a great relationship with the community. We’re proud of that. And I’m hoping that we’ll see another successful event where the community has come together to prepare for this by sending that message out: ‘Hey, keep it local.’”

Cohen and Sweeney stayed as a student resource to distribute information about Deltopia and assist students who felt uncomfortable approaching law enforcement as a liaison.

“People can come up to me and  if they have an issue, I can bring it up to [law enforcement]. In a way, I feel like that could be more productive if someone who’s  uncomfortable talking to them is, whereas we have a working relationship, but also boundaries,” Sweeney said.

Community Resource Deputy Justin Schroeder, Sweeney and Cohen all expressed that such forums need to be better publicized for a greater turnout in the future.

“I think it can be improved on. I think there needs to be more publicity done. Like I shared it on our stuff, but it’s not my event. And also with that, like, I’ve noticed a lot of them are dressed down, which is good, but I think there’s certain things that can make it more approachable and just better publicizing,” Sweeney said.

Cohen had a similar sentiment, adding that many community members would want to attend such an event if the event were better publicized to the public.

“That’s one of my biggest critiques, was just the publicizing. Obviously we hear about it because we’re in this world constantly, but my housemates are not gonna find out about it. I know people have these questions and want to find out answers,” Cohen said.

Schroeder said that the low turnout will make the sheriff’s office rethink the format with which they conduct such events.

“I think it needs to change in the format a little bit because as you see, we don’t have a huge turnout. And I don’t know exactly why that is. I was just across the street, you might have seen that people are just sort of a little intimidated to come over to 20 people hanging out under booths and tents,” Schroeder said. “And so I don’t know how we can do this to be more approachable. We tried to dress down the uniforms and not have any uniforms present and everything like that. But the turnout is what we’re trying to get. And so I don’t know if that needs to be more social media messaging.”