The Daily Nexus
Sports
Gauchos Miss Out on the March Madness
April 3, 2022 at 5:26 pm by Garret Harcourt

The UC Santa Barbara men’s basketball team concluded the regular season placing No. 5 in the Big West Conference before heading to Henderson, Nevada, where they looked to defend their Big West Championship. UCSB entered the tournament with the second-best odds to win, according to multiple sportsbooks. 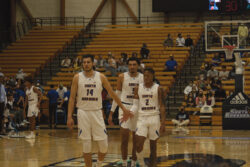 On March 10, the Gauchos took on the tournament favorite UC Irvine and won 78-69. However, in the second-to-last day of the five-day tournament, the Gauchos just fell short of a championship title when they lost to No. 1 seed Long Beach State from a buzzer beater shot.  Cal State Fullerton ended up upsetting Long Beach State, advancing Fullerton to the NCAA tournament where they took a loss to the eventual final-four betting favorite Duke University.

Throughout the NCAA tournament, there were many thrilling games, many of which ended in overtime. For instance, there was the play-in game between Rutgers and Notre Dame that turned into double overtime, eventually sending Notre Dame to the round of 64 where they went on to upset Alabama in the first round.

In a year of many upsets happening in this year’s NCAA tournament, none was more of a Cinderella run than that of Saint Peter’s. Saint Peter’s began their tournament against No. 2 Kentucky, who had been one of the pre-tournament betting favorites to win the tournament. They were able to narrowly beat Kentucky, then cruised past No. 7 Murray State into the Sweet 16. Saint Peter’s made it to the Elite 8 following another upset victory versus Purdue in a back-and-forth matchup, but lost the following round to No. 8 seed North Carolina.

North Carolina and Duke are not only Atlantic Coast Conference rivals but are each known for their dominance throughout the tournament. These longstanding rivals will be playing each other for the first time in their storied history in the Final Four of the tournament.

No. 8 North Carolina had a particularly difficult route to the Final Four, beginning with a victory over the No. 1-seeded team in the east side of the bracket, Baylor. From there, their Cinderella run continued as they beat a tough No. 4 UCLA team and ended Saint Peter’s run in the Elite 8.

North Carolina’s matchup opponent, Duke, got to the Final Four with two comfortable margins of victory. One of these was in the first round of the tournament against No. 15 seed Fullerton before they played two thrillers against Texas Tech and Arkansas, with Arkansas having knocked out the 2021 runner-up and No. 1 seed Gonzaga. On the other side of the bracket, the south region was won by Villanova, who didn’t have to deal with the No. 1, 3, or 4 seeds. No. 3 seed Tennessee was upset by No. 11 Michigan, No. 4 seed Illinois was upset by Houston, and No. 1 seed Arizona was dominated by No. 5 Houston, who could only muster 44 points in a loss to Villanova.

The only No. 1 seed to advance to the Final Four came out of the midwest with Kansas. Many upsets occurred in this region, with No. 11 Iowa State beating Louisiana State and Wisconsin  and No. 10 Miami winning upset victories against the University of Southern California and No. 2 Auburn. Miami and Iowa State then faced off, with Miami prevailing and moving on to face Kansas in the Elite 8. Kansas needed two straight comeback victories to move into the Elite 8 and Final Four, with Kansas’s second half versus Miami resulting in a blowout 26-point victory for them.

In the final run of the legendary Coach Mike Krzyzewski, more commonly known as Coach K, he has a chance to end it with a bang against rival North Carolina. On top of that, if Kansas and Duke were to win in the Final Four, it would line up Coach K to beat Kansas, the team he had beat en route to his first NCAA tournament championship.