UC Santa Barbara’s softball team has gotten off to a bad start this year and signs are not trending upward due to a current 3-game losing streak and 1-5 in conference play. 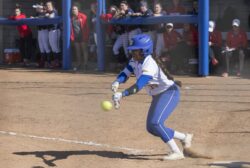 There is always room to improve and time to turn around the 9-22 start to the season with many conference and out-of-conference games to play for the Gauchos.

On the defensive side of the ball, it doesn’t get much better for the Lady Gauchos. The Gauchos rank 148th in the country in fielding percentage which, once again, places the Gauchos in the middle of the pack for the Division I softball schools. The earned run average of the Gauchos’ pitchers is a whopping 6.26 which would rank the pitching staff in the top 20 worst earned run averages in the country.

With that said, there are still many bright spots in the Gauchos’ starting lineup. Starting with sophomore infielder Madelyn McNally, who is batting close to .400, McNally is second on the team with 34 hits and leads the team with 9 stolen bases. Leading the team in hits is senior infielder Maci Fines, with 35 hits and a team-leading 17 runs batted in. On the field, senior 1B/outfielder Rayna Cohen and sophomore catcher/utility Ashley Donaldson have been stellar, committing only one error each in the season.

With many players producing at a high level, as mentioned above, it’s only a matter of time before the Gauchos string together a nice win streak to end the season.