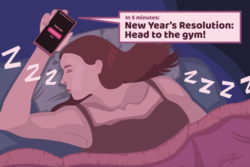 A few months into 2022 and New Year’s Eve parties have died down and the confetti has settled. The phrase “Happy New Year” is no longer socially acceptable to say to one another as it has been three months since the start of the year. The resolutions have already been made (or not made) and some have already “failed.” Yet, others have prevailed. Maybe they haven’t been perfect in exacting their resolutions, but they are persisting. They have made great progress and are on track to accomplishing their goals. How do they do it?

Many of the people who “failed” already are usually ones that set lofty goals for themselves that are usually too rigid or grand. Others are too vague, such as “lose weight” or “save more money.” Instead, you should set specific goals and implement habits, which build over time to get you to your goal.

But how likely are you to accomplish these goals?

According to U.S. News & World Report, 80% of New Year’s resolutions fail within the second week of February. This number may be discouraging, but with the right strategies and discipline you can beat the odds.

You see motivational messages touted everywhere from Instagram to the magnets on your mom’s fridge. You hear it from people too, about how they never feel motivated to work out, read, or what have you. “If only I had more motivation,” they say. Well I’m here to tell you that it’s not motivation you need, it’s self-discipline.

What’s the difference between motivation and self-discipline? You can think of motivation as the kindling needed to start the fire, and discipline as the wood the fire uses to stay ablaze. You need motivation to get started, but you need discipline to keep going. Discipline is doing something even if you “don’t feel like it.” Habits take time to form, and they need to be practiced regularly to stick. By practicing discipline in your daily life, whether it be as simple as making yourself floss every night, it is a muscle that strengthens the more you use it.

In James Clear’s book, “Atomic Habits: An Easy & Proven Way to Build Good Habits & Break Bad Ones,” he writes, “Habits are the compound interest of self-improvement. The same way that money multiplies through compound interest, the effects of your habits multiply as you repeat them.” With habits, you need to practice them frequently and consistently in order to see results. If one of your goals is to work out more, you need to be specific in terms of what you mean and when you want to implement said actions.

For example, you can say that you are going to work out every week at least three times for at least 30 minutes. Something that people will say is “I am trying to work out more.” From the wise words of Yoda in “Star Wars: Episode V – The Empire Strikes Back,” “Do or do not, there is no try.” Don’t let yourself off the hook so easily, either do the thing you said you would or don’t.

My New Year’s resolutions are in alignment with the most common New Year’s resolutions others tend to have, but more specific. I am going to run a mile for every day of the year. This does not mean I will run a mile everyday, but that my total mileage for the year will be 365. I am breaking it up into months, so for January, I ran 31 miles, for February, I ran 28 miles, and so on. I am on track with accomplishing this goal.

Another resolution I have is cooking new recipes. I disliked cooking at the beginning of the year, but now I cook almost every day. I’m a novice, these recipes are not very complex, but I try new ones to push my techniques and my tastebuds.

Lastly, I resolved to read at least 10 books this year. It may not seem like much, but I want to make these goals within my reach. I read five books last year, so I will have doubled the number of books read from the previous year. These resolutions are being done on a regular basis, and that is how they become habits. Once they become habits, they are performed like a routine and are accomplished with more ease.

If you are someone who was accomplishing their resolutions at the beginning of the year but is now struggling or has given up, I want to say that it is not too late. The year has just begun, and there is still plenty of time to restart your goals. Habits don’t have a specific time to build up, even if there are those that will say it takes 21 days, 30 days or 90 days for a habit to form. This gives the illusion that once those preset days are up, it is time to stop implementing the habits. The best habits are those that are formed over a lifetime, and those are the ones that make all the difference.