The Daily Nexus
Events
Comedian and Podcast Host Marc Maron Performs at The Lobero Theatre
March 22, 2022 at 11:02 am by Derek Mejia

The King of Existential Dread, host of the “WTF” podcast, and stand-up comedian Marc Maron played to a packed house at Santa Barbara’s Lobero Theatre on Sunday, March 6 as part of his “This May Be The Last Time” tour. Before stepping on stage a member of the Lobero Theater staff came onto the stage and thanked theater members, VIP ticket holders and sponsors, before detailing some of the upcoming shows. 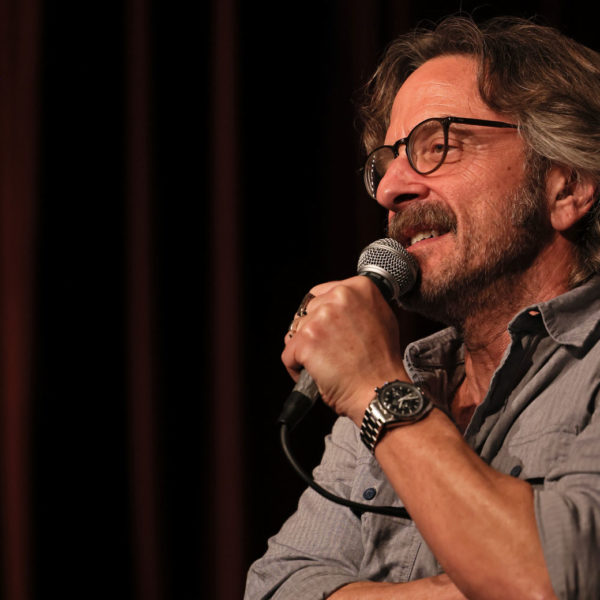 After this announcement, Maron’s voice could be heard over the PA system to the surprise of the bemused audience. “Yes, this is Marc’s voice,” confirmed the comedian. Maron then introduced his opener, stand-up comedian Esther Povitsky, known affectionately by her stage name “Little Esther.”

Povitsky came onto the stage and opened by talking about her recent engagement. She mused on the 10-year age difference between her and her fiance, “I might have a whole other life after him.” The topic then moved on to role-playing in her relationship. She brought up asking the audience at the San Luis Obispo show the night before about role-playing. She told the Santa Barbara audience someone in the audience at the previous show blurted out gynecologist as a role-playing character to which she responded, “I don’t think you understand why we go there.”

Povitsky then talked about her role on the Hulu series “Dollface.” “I play the fourth friend, they make it very clear,” the comic noted. She closed with a bit about the three ways to marry a billionaire, one of which is to pretend you like aviation,“That is how Lauren Sanchez got Bezos to leave his wife.” Povitsky thanked the audience and introduced Maron, who promptly came onto the stage.

“I’m happy to be here. I don’t know what’s happening,” Maron declared. He started his set by ribbing with the audience, “It feels like you people have a pulse on what’s happening here.” Then Maron joked that Santa Barbara was “settled by rich people who left other places.” A woman in the audience shouted something inaudible. Maron attempted to confirm what the audience member had yelped to no avail. “I’m glad you stopped the momentum for that,” he jokingly quipped before saying, “This is a nice way to start.”

Maron then went for lighter material and said, “I don’t want to be negative, but I don’t think anything’s ever going to get better ever again.” This comment was met with cheers and applause from the audience.

Maron’s content during this new hour was significantly gloomy and despairing. “I think most of you will be happy with authoritarianism,” the comic declared. He riffed on the worsening climate crisis, “There’s so much we can do nothing about,” before expressing his thoughts on Greta Thunberg, “I think she’s got it.” During the set, he admitted that he was working on a one-man show called “Voices of the Future.” Maron then proceeded to do three characters from the new show. After the comedic bit, Maron commented to the audience, “You like shows within a show.” The show then went into the debates around the COVID-19 vaccination, moving onto Maron’s frustration with anti-vaxxers, “At some point morons were like ‘I don’t know.’” He subsequently addressed his own recent experience with his bout of COVID-19 in January, which prompted the rescheduling of the Lobero Theater show, his own feelings on vaccinations, the absurdity of alternative remedies and the controversy surrounding Joe Rogan and vaccine misinformation.

The comedian doubled down on the morbidity of his set by noting the political rifts in the United States, “We’re just biding our time before the stupid people decide on a uniform.” During the joke an audience member let out a loud snort laugh, which Maron quickly addressed, “Snort laugh. Awesome.” He then asked the audience member to identify themselves, and off in the distance I could hear someone admit it was them. He moved on, but not before commenting, “If that’s the only snort I get I won’t think I delivered the goods.”

Fans of Maron know that the comedian’s parents have always been fodder for material, and this new hour was no exception. He discussed his father’s recent dementia diagnosis and spending more time with him because of it. He then discussed his feelings of gratitude for his father’s partner Rosie, who has taken care of him since his diagnosis, “I don’t believe in Jesus, but I thank him every day for Rosie.” The comedian moved on to joking about his mother. He began with an anecdote about a visit from his mother. Annoyed after two days of her visit, the comedian bribed her with a Bloomingdale’s bag in order to get her to go home early. He ended the parental material by commenting, “Maybe some of you have healthy relationships with your parents, so these jokes aren’t for you.”

During the early months of the pandemic, the comedian was sheltering at home with his partner, film director Lynn Shelton, who tragically passed away from Acute myeloid leukemia in May 2020. “How do you process grief as a comic,” he admitted. Maron acknowledged the vulnerability of the grieving as a public figure. “I felt like an exhibit at the zoo,” he said. Further, he detailed the books friends suggested to process his grief, books like Joan Didion’s “Year of Magical Thinking” and C.S. Lewis’ “A Grief Observed.” As Maron discussed Shelton’s passing there was absolute silence in the theater.

A level of respect in accordance with the vulnerability exhibited on stage. Then out of nowhere, Maron broke that silence with a macabre joke on the relationship between humor, grief and sadness, “There were probably some hilarious people at Auschwitz.” Nevertheless, Maron talked about trying to move on and find love again in the wake of his own personal tragedy. He joked about writing a one-man show that he would call “Marc Maron’s Kaddish.” Musing about the format he joked about doing a TED Talk and starting with “Everybody dies.”

Maron then proceeded to key the audience into his material writing process, which consisted of a ton of loose papers with writing all over them. As he read some of his ideas on stage, an audience member yelled, “You’re amazing.” Seemingly unperturbed by this scream he continued reading joke ideas. One that he read said, “When I hate myself, I hate anyone who has liked me.”

He then moved on to talking about couples who had babies during the pandemic. “At some point, those plague babies will want answers,” he joked before proceeding into a stream of consciousness bit where a child asks about life before they were born, which results in a father talking about his broken relationship with the mother. Before the audience could laugh, the comedian announced that he was going to write a one-man show about plague babies, “One person show, plague babies. It will be running with Kaddish and Voices of the Future.” The audience erupted in laughter and applause.

Towards the end, there was a portion of the show where Maron took questions from the audience. The first question asked from the audience member was, “How are you really?” Responding to the question Maron admitted to having an interesting show the night before at the Fremont Theater in San Luis Obispo, “They were having a great time and I resented it.” He was then asked about his favorite musician interviews, and he discussed an upcoming interview with The Rolling Stones guitarist Keith Richards, who he previously interviewed in 2015. He was asked about the recent death of comedian Norm Macdonald. “Thanks for bringing us down. You want to bring up Bob Saget?,” he responded.

He also answered questions on guitar amps and the best food in New Mexico. One of the questions asked was about the cancellation of his show “GLOW” just shy of its final season. He admitted that the final season would have seen his character Sam Sylvia wrestling Alison Brie’s Ruth. Surprisingly, he even addressed the controversy surrounding comments made by actor Sam Elliott on Maron’s podcast about “The Power of the Dog.” Maron expressed sympathies for the actor, while joking “Grandpa’s gonna grandpa.”

The comedian closed out the show by admitting he recently decided to buy a gun. He expressed his concerns with the recent political climate in the country and his intentions to use the gun for protection. “I don’t want to be the first one on the truck,” he quipped. However, he quickly rescinded his intentions when expressed concerns over his struggle with mental health. “I’m never going to look at a bat and go,‘I’m going to kill myself’” and then proceed to simulate his own suicide by bat. This new hour of material is a raunchy, existential, and at times melancholy addition to the comedian’s oeuvre. Fans of Marc Maron can catch him on the road as part of his ongoing “This May Be The Last Time” tour. His next California tour dates will be a three night residency at Dynasty Typewriter in Los Angeles. You can also listen to his podcast WTF with Marc Maron on Mondays & Tuesday.