The Daily Nexus
Events
In Conversation: Erik Larson and Pico Iyer at Campbell Hall
March 10, 2022 at 9:45 pm by Isabella Chichioco 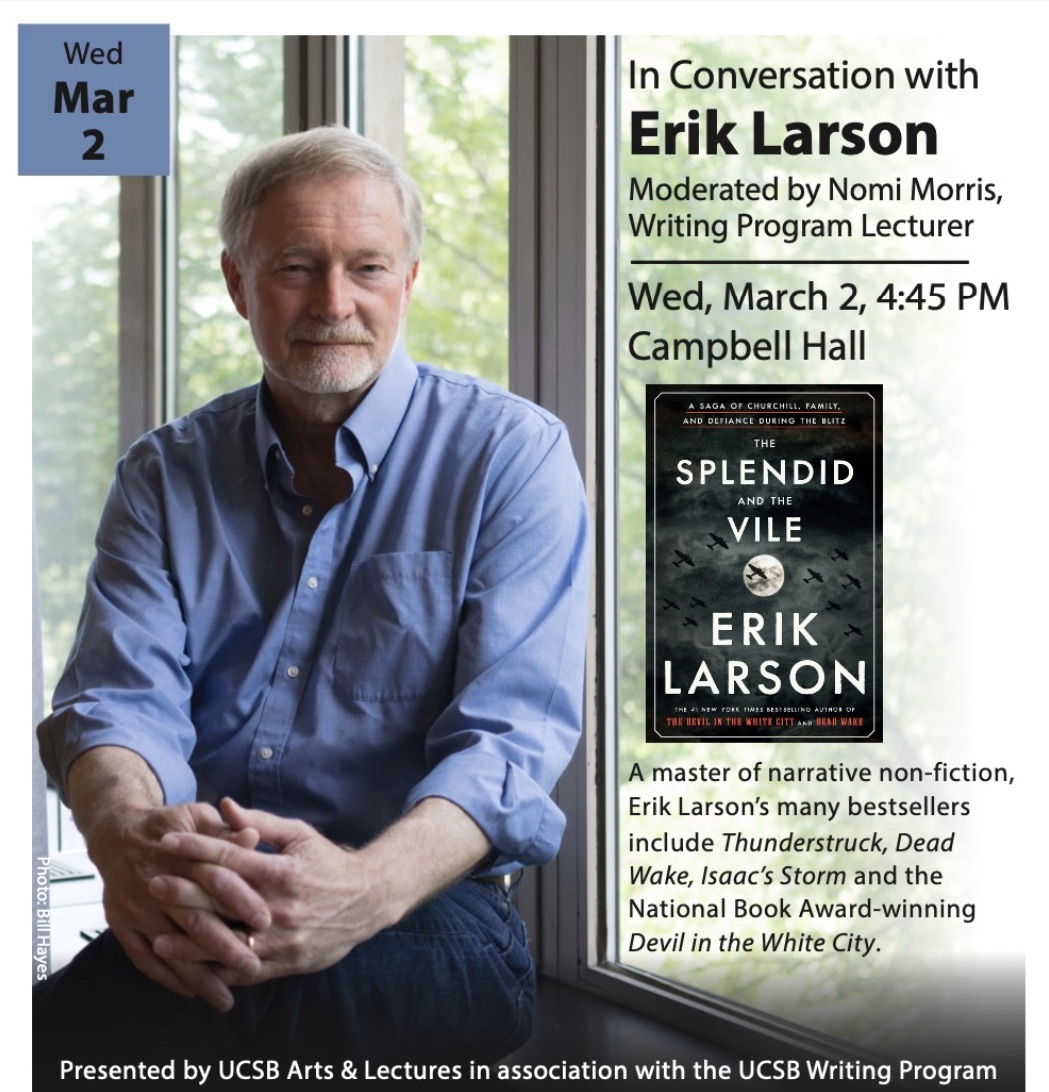 On Wednesday, March 2, New York Times bestselling author Erik Larson was joined by his friend and fellow writer Pico Iyer in Campbell Hall to discuss Larson’s widely read nonfiction works. Hosted by UC Santa Barbara Arts & Lectures, Larson treated the campus community to a memorable night about his writing career and how his stories aim to give another perspective to history as we know it.

Larson has written a total of eight novels, and six of them have landed on the New York Times bestsellers list. One of his recent works, The Devil in the White City, won an Edgar Award — which honors literature in the mystery genre — for fact-crime writing and is currently being adapted into a Hulu limited TV series directed by Leonardo DiCaprio and Martin Scorsese. Although the COVID-19 pandemic has postponed his book tour, Larson is now continuing his book promoting activities.

The night started off with Iyer talking about his relationship with Larson as they were colleagues together at Time magazine, although they never met face-to-face until recently. Iyer stated his own opinions on Larson’s novel and writing, marveling at how Larson manages to “take the world we think we know and make it fresh and exciting again.”

Once Larson joined Iyer on stage, the two colleagues talked about their current writing endeavors and how they find inspiration for their respective works. Larson specifically talked about 9/11, an incident that was very heartbreaking and shocking for America and the rest of the world to hear. Larson explained his thinking process when incidents like 9/11 occur, often wondering how the victims might feel and pondering, “How does anyone endure this kind of pain?” Based on this feeling and a desire to explore how people navigate and recover through traumatic events, Larson writes many nonfiction novels to introduce and revisit different perspectives on events that most people usually only learn about in history class.

Iyer continued to ask Larson about his inspiration and writing process for many of his novels, one of them in particular being The Splendid and the Vile. The Splendid and the Vile tells the story of Mary Churchill (or Soames), the youngest surviving daughter of the Churchill family. Larson explained the difficulty in obtaining Churchill’s diary, as the family member who held onto it initially did not want to let anyone write about it. Once Larson received approval to use the diary for his novel, he began to unpack and write about Mary Churchill’s untold story. He mentioned how his favorite diary entry was Churchill reminiscing about a summer day in the countryside. Although it appeared to seem random and unimportant, this was one of the few entries that captured a relaxing and innocent moment amidst the war that was currently happening at the time.

Another noteworthy event of the night was when Iyer asked Larson if writing about so many traumatic events in history has affected the way Larson views humanity. In response to this question, Larson says, “Do I see the world as a battlefield between good and evil? No, I wish in a way it were that simple.” He explains that good and evil have a lot of nuances in the term, so it’s hard to define the world in such a binary order. Larson elaborates by saying how humanity has a lot of both good and evil traits that impact how events play out in the long run; his favorite trait to write about is hubris. He explores the actions that people do based off of hubris and pride in many of his novels, such as The Devil in the White City.

Iyer ends the night by asking Larson one last question: “Do you keep a diary?” Larson states that while he does not have a traditional diary like Mary Churchill, he does have a journal that helps him when writing his narratives. He refers to it as “an idea and narrative passage journal,” which gives him a safe space to explore his writing ideas for the future.

Although nonfiction novels are not as popular among college students today, Erik Larson’s works are definitely a must-read, and you can check out more of his works on his official website.