On this past Thursday, March 3, the Outstanding Directors of the Year award event was held at The Arlington Theatre in downtown Santa Barbara. The historic venue is a longtime host to the Santa Barbara International Film Festival, an 11-day festival honoring and celebrating some of the most illustrious talents in the film industry. Since its inauguration in 1986, this year’s event honoring the filmmakers was one of the first events that marked the Santa Barbara International Film Festival’s return to in-person attendance.

The filmmakers honored with the Outstanding Directors of the Year award included Paul Thomas Anderson for “Licorice Pizza,” Sir Kenneth Branagh for “Belfast,” Jane Campion for “The Power of the Dog,” Ryusuke Hamaguchi for “Drive My Car” and Steven Spielberg for “West Side Story.”

At around 7:30 p.m., The Arlington Theatre was a bright beacon in the night. With the marquee lit up, the surrounding area was bustling with people and cameras as celebrities walked down the red carpet into the theater.

A line of attendees waiting to get in filed down State Street as onlookers hovered outside of the theater, attempting to get a glimpse of the stars on the red carpet as demonstrators held up signs in support of Ukraine.

Approximately 45 minutes later, attendees made their way into the theater and took their seats, concession snacks in hand, as the executive director of the festival, Roger Durling, walked onto the stage to deliver an introduction.

The charismatic leader radiated his excitement for the event and shared that he is usually a glass-half-empty person. However, the Santa Barbara International Film Festival (SBIFF) returning to in-person attendance, Durling noted, makes him a glass-half-full person.

Durling also poignantly acknowledged the geopolitical unfoldings in Ukraine that backdropped the event. The executive director said that the steeple of The Arlington Theatre would be lit up in the national colors of Ukraine in honor of the country until peace is granted. He also shared how SBIFF attendees can donate to direct relief organizations through the event before handing the mic over to Scott Feinberg, The Hollywood Reporter journalist who has been moderating the Outstanding Directors of the Year award panel for six years.

Hailing from Belfast, Japan, New Zealand and the United States, all of the directors being honored are also nominees for Best Picture at this year’s Oscars, Feinberg highlighted.

He then shared that, unfortunately, Spielberg, Hamaguchi and Campion were unable to attend the festival in person, but the directors were featured in a previously recorded conversation with Feinberg.

To kick off the event, the first to be highlighted for the award was legendary director, producer and screenwriter Steven Spielberg. Spielberg was honored for his 2021 reimagining of Stephen Sondheim’s iconic 1957 Broadway musical, “West Side Story.” The musical follows the star-crossed lovers Tony (played by Ansel Elgort) and Maria (played by breakout star Rachel Zegler), whose romance is backdropped by warring rival gangs — the Puerto Rican Sharks and the American Jets.

Spielberg appeared on the screen of The Arlington Theatre and, despite his virtual presence, attendees were ecstatic to see the iconic filmmaker, cheering his arrival.

Feinberg began by highlighting that even after over 50 years of making incredible films, Spielberg had never made a musical.

Spielberg shared that he had been longing to make a musical and “West Side Story” was the first musical he was introduced to.

The Hollywood Reporter journalist also underscored the new retelling of the musical. Spielberg is “telling this story with an authenticity that it’s rarely had, if ever before, in terms of having Latino and Latina performers portray Latino and Latina characters,” Feinberg said.

“It was determined at the very outset that if I wanted to do ‘West Side Story,’ I did not want to cast white actors … in this day and age it would be unconscionable to make ‘West Side Story’ without a Latinx cast,” Spielberg said, which was met with cheers from the audience.

Spielberg then concluded his time and was met with cheers from the audience again.

As Anderson walked across the stage, he was met with applause from the audience. 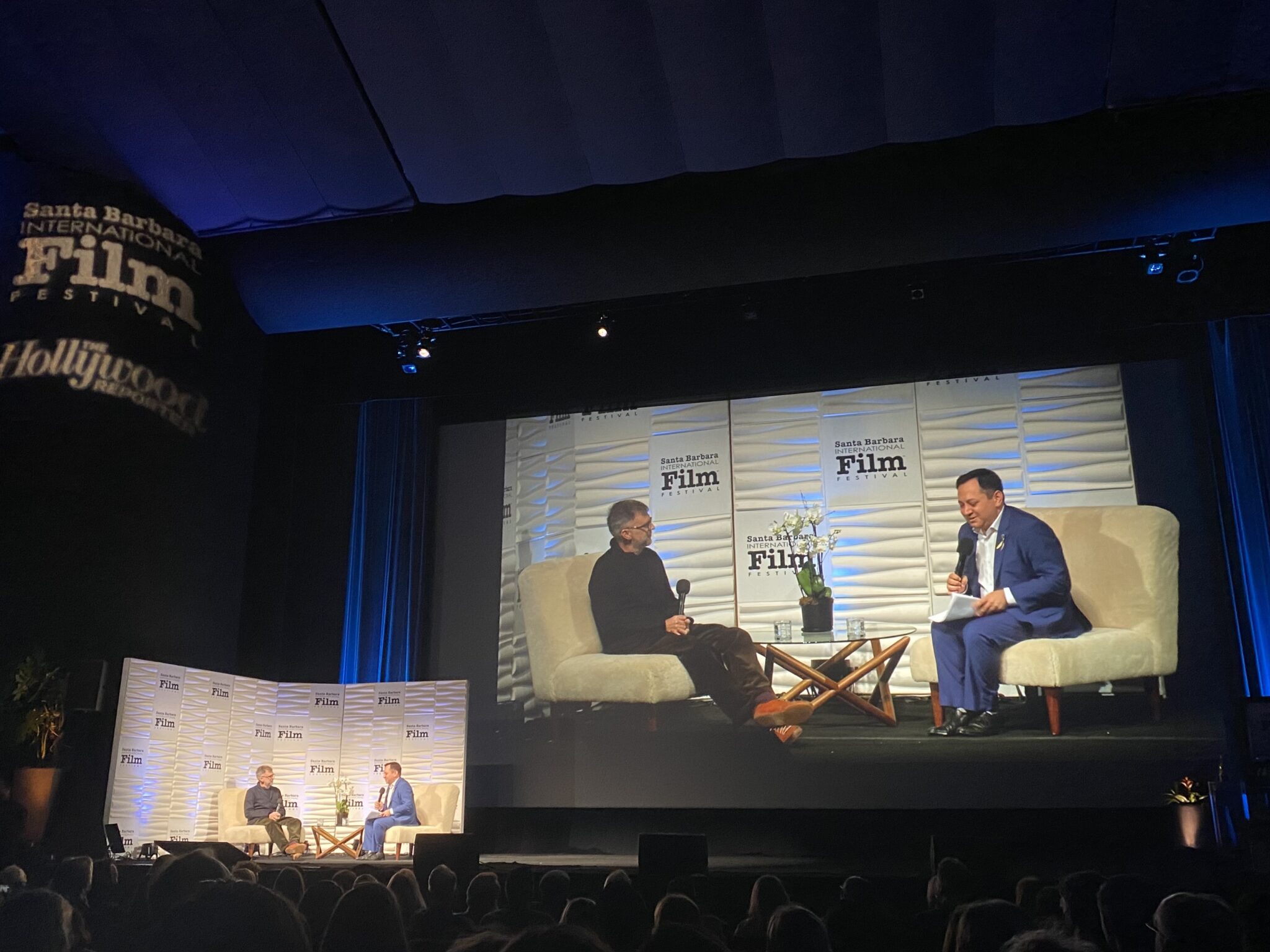 Anderson began by sharing that the concept of this movie was formed about 20 years ago, based on a real-life encounter he witnessed. Anderson saw a junior high student attempt to get the phone number of a photographer on his school picture day

“I filed it away in my mind. I thought that’s a terrific premise, the premise being, what if, against all better judgment, this girl actually turns up for a date with this annoying kid,” Anderson said.

Anderson also shared his connection to the newcomer stars of the film, both of whom had never acted in a professional capacity before.

Anderson worked closely with the late actor Hoffman as he was cast in many of his films, however, his tie to Haim is a story that dives into his childhood.

“When I was seven years old, I went to school with tough teachers but my art teacher … taught me how to paint and I was a horrible student. But, in her class I was a good student … she made such an impression on me that I kept all those paintings I made with her throughout my adult life,” Anderson said.

Years later, after the formation of the band HAIM, Anderson noticed that the members all looked like Ms. Rose, his art teacher. The HAIM sisters came over for dinner one night and revealed the familial connection.

Anderson concluded that crafting “Licorice Pizza” was incredibly easy and fun to write, a feat often unknown to screenwriters and directors.

The next director to be honored virtually was acclaimed Japanese director and screenwriter Ryusuke Hamaguchi for “Drive My Car.” The film follows widowed stage actor and director Yūsuke Kafuku as his life becomes intertwined with Misaki Watari, a young chauffeur, as he directs a production of “Uncle Vanya” in Hiroshima. The film is adapted from acclaimed writer Haruki Murakami’s short story of the same name from his short story collection titled “Men Without Women.”

Feinberg noted that Hamaguchi and the lead actor of the film had been familiar with each other for years, however, this was the two’s first time working together.

Hamaguchi shared that the two were looking forward to working together on the right project, and “Drive My Car” had the right atmosphere.

Hamaguchi also discussed the facets of adapting a written work. Murakami is known to be an elusive figure, and Hamaguchi shared that he offered to let the writer read the script but never heard back. Hamaguchi revealed that he didn’t know Murakami even watched the film until he read a New York Times article but was pleased to discover that the writer enjoyed the three-hour-long film.

Hamaguchi concluded by expressing how baffled and grateful he was, and how he wished he could have attended SBIFF in person.

Next to be honored in person was renowned Irish director, actor and producer Sir Kenneth Branagh for “Belfast.” The film chronicles his childhood in Belfast, Ireland during the 1960s as the Northern Ireland conflicts broke out. 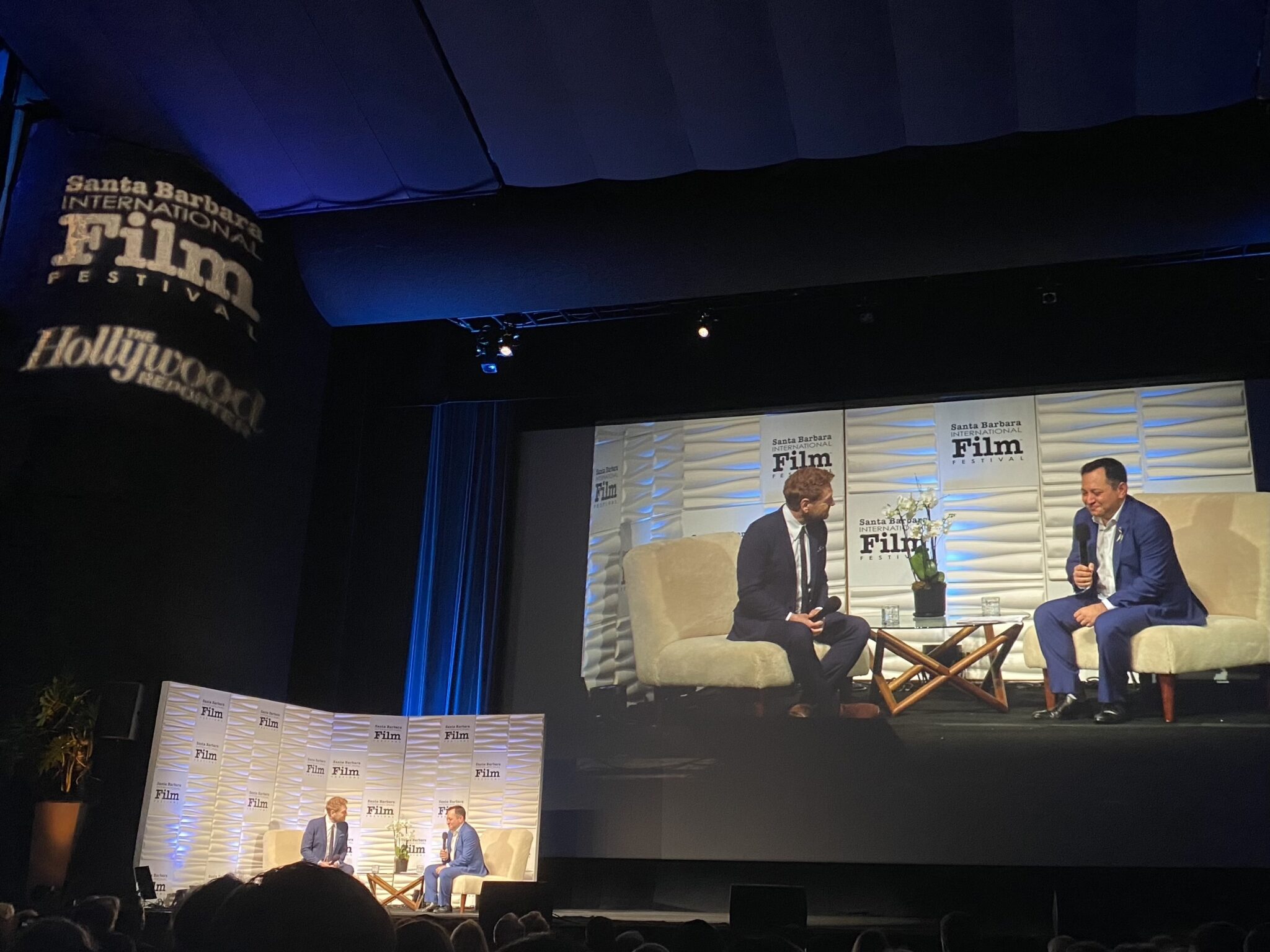 Only nine years old when the events of the movie unfolded, Branagh shared why this story was being told now.

“It was really being sent back to the beginning of the pandemic to this feeling of uncertainty, this sense that all bets were off … it was hard to know how you would navigate the future so it became the catalyst for something that had been preoccupying me,” Branagh said.

The actor also revealed that he had an alternate ending in mind for the film, in which he would play a character, however, he concluded that it didn’t work out.

Branagh concluded his time with that “Belfast” wasn’t just about his family, but ultimately about family and the parents who sacrifice for their children every day around the world.

Last, but not least, to be honored virtually, was New Zealand trailblazing director, screenwriter and producer Jane Campion for “The Power of the Dog.” The Western follows Phil Burbank, played by Benedict Cumberbatch, who begins to torment his brother’s new wife and son when they arrive at their ranch.

Feinberg highlighted that it’s interesting that the New Zealand director chose to work on an American Western film.

“It’s a complex approach … it’s about the nature of humanity,” Campion said about the film.

The film marks a departure from the stories Campion tells, which are often women-led. Campion said that she simply “felt emboldened to tell whatever story [she] wanted to tell.”

Campion also revealed that “The Power of the Dog,” was almost shot in black and white, which she believes was tied to having complete control over the film’s color palette.

“I can’t get away with it like Kenneth,” Campion said. A cheeky nod to “Belfast”’s being almost entirely in black and white.

Campion concluded with a discussion of embracing female voices in film, and how it shouldn’t be simply charity.

The night came to an end with a celebration of gratitude for the directors and all those who attended.