The Daily Nexus
News
Survivor Speaks Out About Eavesdropping and Invasion of Privacy Case
March 3, 2022 at 3:45 pm by Atmika Iyer and Holly Rusch

A UC Santa Barbara student was arrested on Feb. 15 for allegedly hiding a camera in the bathroom of a student residence on Madrid Road and has been charged with two misdemeanors — eavesdropping and invasion of privacy with intent to view another person in a state of undress. 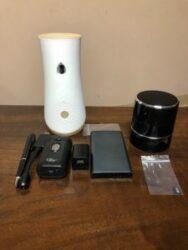 Since the arrest, fourth-year Justin Asinobi has been released on bail, and a temporary restraining order has been filed against him on behalf of UCSB student Asia Juarez and her two roommates, who found a hidden camera in their bathroom on the morning of Feb. 15.

“As I was brushing my teeth, I was just staring at all the things that I have in my bathroom,” Juarez described of the morning she found the hidden camera. “Seeing, ‘OK, that belongs there, that belongs there,’ and then I just remember, just blatantly, bluntly seeing the camera there. And my heart just dropped.”

Because Asinobi was “the only other person outside of our house that was welcomed in” the day before she discovered the camera, Juarez said she quickly came to the conclusion that he was the perpetrator — a determination she reported to law enforcement, who arrested Asinobi after finding surveillance paraphernalia in his home a day later.

Juarez and Asinobi had known each other for over a year and were friends since the beginning of the school year.

The day before Juarez discovered the hidden camera, she and Asinobi took photos together at the Valentine’s Day Photo Booth by Storke Tower.

“We took photo booth pictures. It was cool. Why am I not gonna take pictures with my homie? And there’s a photo of us smiling at each other, just like, ‘Oh yeah, he’s my friend,’” Juarez said. “And I just remember as soon as I found out, I just burned those photos so quick[ly]. I hung up [the phone] and I burned the shit out of the photos.”

Juarez said she wanted to share her story because she “has nothing to be ashamed of.”

“I decided to share because I have nothing to be ashamed of. I have nothing to feel guilty about. I gave somebody my love,” Juarez said. “And maybe it didn’t turn out the way I thought, but that doesn’t define how I keep living my life and keep loving people. Everybody is going through a lot of stuff right now in I.V. and that’s OK. If you’re going through it, that’s OK.”

Additionally, Juarez hopes that by speaking about her experience, survivors of sexual violence, assault and invasion of privacy will remember that they aren’t to blame for crimes committed against them.

“The thing is that it doesn’t matter who you invite, who invited who over,” Juarez said, referencing her invitation for Asinobi to hang out at her house the day he allegedly placed the camera.

“It doesn’t matter. If you invite them over or not, you trust these people. You give them love and kindness and respect, you expect the same. And just don’t blame yourself for these types of situations.”

Juarez added that Asinobi’s prominent and anonymous social media presence as @jadedjustin__ on Twitter, also known as mr.bitches, led to a shocking discovery for many that the infamous account’s owner committed the crime.

“Within his media persona, the whole thing was kind of anonymous. You don’t know who this guy is. When it was first released, I just remember seeing people don’t know who his name is. They’re like, ‘They’re just like some person.’” Juarez said. “But then when you see somebody finally say on media, ‘This is this person,’ you’re just shocked, like mouth-drop.”

The decision to file a restraining order against Asinobi has been a draining, constant reminder of Asinobi’s violation against her, Juarez said.

“When you’re called by a DA or a sheriff and you gotta answer, you’re just like ‘Shit, well, I thought I forgot about it’ … but now it’s like, ‘Damn, this is something I’m going to have to learn to carry on the bottom of my shoe till it’s done.’”

Law enforcement is continuing the investigation into Asinobi by requesting a warrant to look through the cameras found in the suspect’s residence.

Since the initial arrest, Isla Vista Foot Patrol (IVFP) received multiple calls from students who believe they may have found a camera within their residence.

“We’ve had quite a few people either come into the office or call in worried that they could be potential victims in this case, and they may have noticed the device similar to what they saw in the press release in their house at some point over the past few months,” IVFP spokesperson and Community Resource Deputy Justin Schroeder said.

Schroeder added that others called because they used to be friends with Asinobi, or he  had come to their homes recently.

“Or they had invited that person over to their house for a party or a gathering or something like that [and] were worried he did place one of those devices in their houses,” Schroeder said. “I don’t know the exact number of people that have come forward, but there certainly has been quite a few that have called in worried about that.”

Law enforcement was unable to confirm the number of people who have called in, concerned about finding a device in their home. Schroeder said that as law enforcement reviews the footage, they will contact the additional victims.

“And as our detectives and the district attorney review the footage and the videos that are on the devices, then they’ll contact each victim individually,” Schroeder said.

Currently, Asinobi is charged with two misdemeanors: invasion of privacy and eavesdropping. However, Schroeder said that charges may be added as law enforcement reviews the footage found on Asinobi’s cameras.

Last edited 8 months ago by Survivor