A UC Santa Barbara student was arrested on Feb. 15 for allegedly hiding a camera in the bathroom of an Isla Vista residence and was released from custody Thursday, according to the Santa Barbara County Sheriff’s Office. 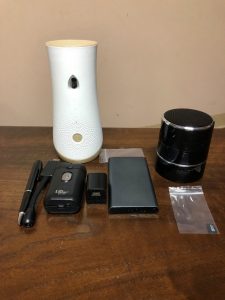 Deputies contacted Asinobi at his residence and uncovered several “surreptitious recording devices” that they believe were used to record victims without their knowledge. Courtesy of Santa Barbara Sheriff’s Office

A crime like eavesdropping is considered a ‘wobbler’ offense, where the defendant can be charged with either a misdemeanor or felony based on past criminal conduct, current criminal conduct and sophistication of the crime, according to the Santa Barbara District Attorney’s office.

Asinobi was previously held on a $400,000 bail after deputies contacted Asinobi at his residence and uncovered several “surreptitious recording devices” that they believe were used to record victims without their knowledge.

A temporary restraining order has been filed against Asinobi on behalf of three people who discovered a recording device in the bathroom of their home on the morning of Feb. 15. The Santa Barbara County Superior Court will meet March 15 to determine if the restraining order will be employed permanently.

UCSB spokesperson Shelly Leachman said that while there is no indication any campus building is involved, “UCPD is working with various campus stakeholders to respond to reports of any suspicious devices that may potentially be on campus in an effort to ensure the privacy and security of our campus community.”