The Daily Nexus
Science & Tech
Back in Bloom: Flowers Begin Their Return to the South Coast
March 3, 2022 at 8:00 pm by Sean Crommelin

The first day of meteorological spring has dawned just as I write this, bringing with it promises of showers, flowers, warming weather and — later on in May — the return of California’s persistent and often spoken-of marine layer.

So — while we await May gray — let’s talk about these flowers.

Southern California’s native wildflowers exhibit a dazzling array of colors, shapes, sizes and timing of blooms. Nestled in the California floristic province, a biodiversity hot spot marked by a Mediterranean climate ranging from Southern Oregon to Northern Baja California and bounded on the east by the towering, well-watered Sierra Nevada mountains, the Santa Barbara area lays claim to about 2,000 species of native plants. 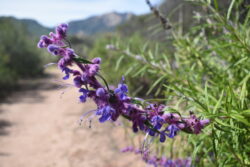 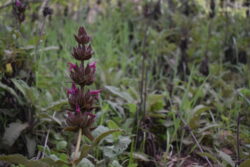 Even as January and February proved themselves to be a tragic bust in terms of precipitation, prodigious rain in December has brought with it a crop of verdant growth throughout Isla Vista and all of the South Coast.

In addition, in the coast zone and coastal mountain ranges, it should be noted that a wet year does not necessarily translate to a stunning floral display anyway.

“Wet years are usually great in the desert, but here … wet years tend to be full of exotic annual grasses. Big grass years are generally not good wildflower years,” according to Carla D’Antonio, a professor in the UCSB Ecology, Evolution, and Marine Biology department.

While one may journey to Ellwood or the foothills of the Santa Ynez Mountains to find fresh crops of invasive mustard, there is also a wealth of native flowers that will begin their blooms in greater numbers as March progresses and continue onward to April, May and even early summer.

It was a fact that a professor of mine from the midwest often lamented, wanting some relief from her incessant allergies: the seeming constancy of blooming and flowering all throughout the Santa Barbara area.

This lineup includes such specimens as the iconic California poppy, various species of lupine, the wild morning glory, bush poppy, California hummingbird sage and woolly blue curls, to name only a few standouts.

The timing of flower blooms largely depends on temperature and elevation. One can expect places like Figueroa Mountain, the broad, pine-studded peak looming over Los Olivos, to harbor blooming events later this spring, likely during late March and early April.

If you are up for an adventure in early summer, traveling to the upper reaches of the Los Padres National Forest — the Chumash Wilderness atop the almost 9000-foot-high Mt. Pinos — will reward you with panoramic views of the mountains north of Santa Barbara and, if the snows have been plentiful enough, acres of floriferous fields of scarlet paintbrush. 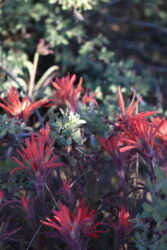 Sites closer to the coast, as well as the lower, south-facing slopes of mountains — which tend to be hotter and drier owing to their direction relative to the sun — have already started blooming in many places.

Walk over to the horse stables west of Isla Vista to catch a glimpse of some fledgling California poppies, for instance. In Del Playa Open Space, the protected parcel of land west of Sea Lookout Park, a field of nonnative wild radish intermixed with coastal goldenbush awaits.

Locally, one can expect to find good flowers in areas without a lot of built-up vegetation, according to D’Antonio. In particular, sites burned by the recent Thomas, Whittier and Cave Fires may have a solid showing of flowers.

However, fire can also harm native wildflowers and other plants by encouraging and facilitating the spread of nonnative vegetation, notably annual grasses and other flowering plants like mustard. Studies looking at the Santa Monica Mountains to the southeast of Santa Barbara, for instance, have documented a decadal transition to nonnative grassland in many parcels of land impacted by repeated fires. 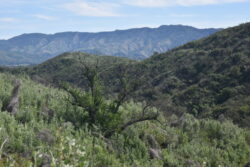 A recently burned landscape with a profusion of new growth in the Santa Ynez Mountains. Sean Crommelin / Daily Nexus

In addition, drought and development alike pose long-term threats to many of California’s most iconic blooms. The particularly heinous drought year of 2021 was marked by parched, dry landscapes even in the peak of spring in many places throughout California, including the Carrizo Plain National Monument to the north of Santa Barbara.

Drought years are particularly difficult because invasive plants can outcompete native annual wildflowers, which generally need more precipitation to spread and bloom than their counterparts. Year over year, this can lead many native plants to become displaced in what was once their habitat.

Coupled with increasing development projects in many regions, which can make wide swathes of habitat unsuitable and also lead to the spread of nonnative species in adjacent land, wildflowers face a smorgasbord of challenges.