The Daily Nexus
The Daily Stench
I Don’t Believe in Blenders
March 2, 2022 at 4:20 pm by Blenders McBlenderson 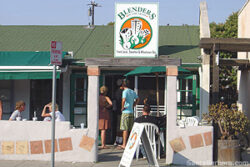 Have you ever been to Blenders of your own accord — or have your friends, desperate to escape the confines of their dorms and to just do something, dragged you along with them?

Have you ever had to stare at the ridiculously large menu board? It’s always a waste of time because you’ll just end up getting what the person in front of you bought.

Have you ever stared at the Blendersland map and wondered how they’ve built an empire in Santa Barbara? There are somehow six Blenders in Isla Vista, Goleta and Santa Barbara alone.

Have you ever wondered what half the things on the menu even are? What the fuck is a Blue Orange? If you’ve ever wanted to taste some delicious bee pollen supplements, Blenders is your place. If you ever want a smoothie that doesn’t have bananas in it, Blenders is not your place.

Speaking of, have you ever even seen the supplements at Blenders? The only thing behind the front desk at all times is a comically large container of Hershey’s chocolate syrup and the faraway ice cream cart, in which globs of fruit magically appear. I don’t know what a pineapple looks like, but I don’t think it’s a gooey ball of ice.

Has anyone ever bought one of the plastic cups at Blenders? Does anyone even care about saving that extra 40 cents?

Everything about Blenders feels like a fever dream. The way too bright lights, the guys with bikes who are always there, the lines that constantly exist day and night, the fervent smoothie drinkers that take over the Hana Kitchen benches.

The place has me questioning my own sanity at points. Is an apple blue? Is a banana orange? I truly do not know. However many times I question the mere existence of Blenders, I am destined to return. Pass me the bee pollen smoothie.

Funny piece! I’m just glad that they have figured out a way to quiet down their blenders. I want the young people who work there to be able to have working ears when they reach middle age.