The men’s basketball team took down Long Beach State 84-71 in front of the blackout-themed Gaucho faithful in a packed Thunderdome on Saturday night. Long Beach State (LBSU) went into the game with an 11-game winning streak and atop the Big West standings with a 10-1 record while the Gauchos looked to redeem a 67-58 defeat at the hands of Cal State Fullerton. 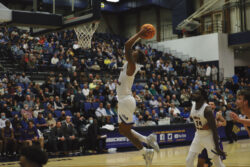 Scoring came early from freshman guard Ajay Mitchell as he delivered 8 points and 3 steals in the first 13 minutes alongside an unstoppable senior forward Amadou Sow who put up 16 first-half points shooting 8/11 from the field. UCSB would take the lead early on and play in front throughout the first half. LBSU’s impressive shooting, a factor that resulted in 5 first-half threes, kept them in the game trailing by a score of 39-38 at the half.

The second half started with a bang from redshirt junior guard Calvin Wishart as he made 2 big threes in what would turn into an 18-point scoring outburst in the second half. Wishart’s shooting was immediately followed by an explosive dunk from junior guard Josh Pierre-Louis as the duo continued to score back and forth, extending UCSB’s lead to 9 points with 10 minutes remaining. The Gauchos would not falter the rest of the way; they ended the game shooting 56.1% from the field with four players scoring over 15 points, allowing UCSB to cruise to victory and splitting the season series with a strong Long Beach State team. Pierre-Louis finished with a near triple-double as he tallied 17 points, 11 assists and 8 rebounds while Mitchell led the team with 20 points in what has been an impressive February for the freshman.

Saturday’s game also featured numerous Gaucho alumni in attendance, with legend of the dome Carrick DeHart, former UCSB and current NBA G League players JaQuori McLaughlin and Devearl Ramsey  alongside former teammate Brandon Cyrus being announced throughout the game. At halftime, members from the 1961 men’s basketball team were announced at center court and received a round of applause from Gaucho fans.

The win marked head coach Joe Pasternack’s 100th win as UCSB’s head coach, a feat he accomplished in only 143 games, making him the fastest to the mark in school history. The Gauchos advanced to 4-5 in the conference and 12-10 overall as they look to end the season strong traveling to The Pavilion to take on a UC Davis team that sits one game ahead of the Gauchos in the conference on Feb. 24. The ‘Chos will play three more games before they take on the Big West tournament with the winner clinching a spot in the NCAA tournament.