Among its multitude of functions, the brain is an expert messenger. The brain uses hormones to regulate the body, maintaining the delicate balance our bodies need to function. UC Santa Barbara psychological & brain sciences associate professor Emily Jacobs studies the brain as first and foremost an endocrine organ in her lab. The research of the Jacobs Lab focuses on the effect of sex-steroid hormones on the structure and function of the brain through many approaches. Their recent paper was published in Frontiers in Neuroscience, titled “The Menstrual Cycle Modulates Whole-Brain Turbulent Dynamics.” 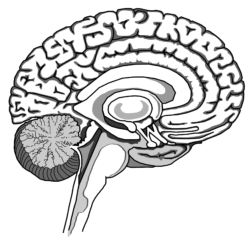 Despite the past research conducted on changes in the brain during the menstrual cycle, the information processing of the brain is not fully understood. Courtesy of Wikimedia Commons

The publication demonstrates how the brain’s information-processing system is changed throughout the span of the menstrual cycle, specifically in the follicular and luteal phases. Hormonal changes were assessed in the same participant — Laura Pritschet — during a natural cycle and a cycle while on a contraceptive.

The Daily Nexus spoke to Pritschet, a doctoral student in the Jacobs Lab, about the research in the Jacobs Lab, her experience with sex-specific neuroendocrinology research and the outlook surrounding women’s health in the broader neuroscience sphere.

According to Pritschet, the study was rigorous. As Pritschet pointed out, most cognitive neuroscience research follows many participants in a short period of time. However, Pritschet described the new trend of the field that the Jacobs Lab also used: “tracking smaller samples of individuals many times over timescales of weeks, months, and years to provide insight into how biological factors introduce variability in the brain.” In the case of the current publication, the study occurred over a period of two months. The first month involved daily MRIs and fMRIs as well as blood tests during a natural (non-medicated) menstrual cycle, while the second round of brain scans and blood tests were done while the participant (Pristchet) was taking a hormonal contraceptive.

As Pritschet describes, “When we traditionally think about an ‘endocrine organ’ in the context of women’s health, we often default to female reproductive organs. However, a central feature of the mammalian endocrine system is that hormonal secretion varies over time — sinusoidal fluctuations every ~28 days for women — and this rhythmicity is essential for brain processes.” This rhythm is precisely what the latest publication from the lab explored. Through the use of a turbulent dynamic framework, the entire information processing of the brain was studied. The follicular and luteal phases of the menstrual cycle were studied in order to review the effects of the cycle on the brain. The follicular phase starts on the first day of the period and ends at the beginning of ovulation, and corresponds to a sharp increase in estradiol and a decrease in progesterone. Additionally, the middle of the luteal phase shows a rise in progesterone and a relatively smaller rise in estradiol. Pritschet summarized, “The results from these studies suggest that estrogen and progesterone have widespread influences on the human brain — from large-scale functional brain networks to the submillimeter scale of hippocampal morphology.” Overall, greater stability in information processing was found in the hormonal contraceptive regime. Meanwhile, the naturally occurring cycle demonstrated increased information processing compared to the contraceptive cycle, more so in the luteal phase.

Despite the past research conducted on changes in the brain during the menstrual cycle, the information processing of the brain is not fully understood. Sex-specific studies are also not fully prioritized, especially in women as most studies overlook menopause as a factor in their participants.. As Pritschet pointed out, preclinical investigations that study both females and males were only recently federally mandated. Additionally, she states, “Recently, the Jacobs Lab quantified the extent to which human neuroscience overlooks all major aspects of the human condition relevant to women (e.g. menstrual cycles, hormonal contraceptive use, pregnancy, and menopause). After examining over 1,000 articles, we found that fewer than 3% of articles from top brain imaging journals in 2018 considered any of these factors in their study design—half of which used these factors as justification to exclude women from participating.”

However, the Jacobs Lab remains hopeful as they push for the application of the latest advancements specifically to the study of women’s brain health. Beyond the scientific applications, they remain pioneers in their inclusion of female researchers. “My frustration with an adopted convention that underrepresents an entire sex fueled my commitment to use my voice and leverage the broader impact of my work to advance women’s health,” Pritschet said. “Scientists must not overlook the simple variables that may ultimately have the farthest reaching implications. Half of the world’s population is made up of women — putting a priority on women’s health research is long overdue.”