The Daily Nexus
News
Dan-el Padilla Peralta Speaks at UCSB About Classicism as an Afro-diasporic Movement
February 22, 2022 at 6:25 pm by Melea Maglalang

The UC Santa Barbara Arts, Design & Architecture Museum hosted a virtual lecture by Dan-el Padilla Peralta, associate professor of classics at Princeton University, titled “The Greeks are Then, the Orishas are Now: Harmonia Rosales and the Black Atlantic” on Feb. 10.

The lecture was the first of the museum’s “Myth, Religion, and Race: the Art of Harmonia Rosales” lecture series, examining works by Harmonia Rosales, an Afro-Cuban American artist. 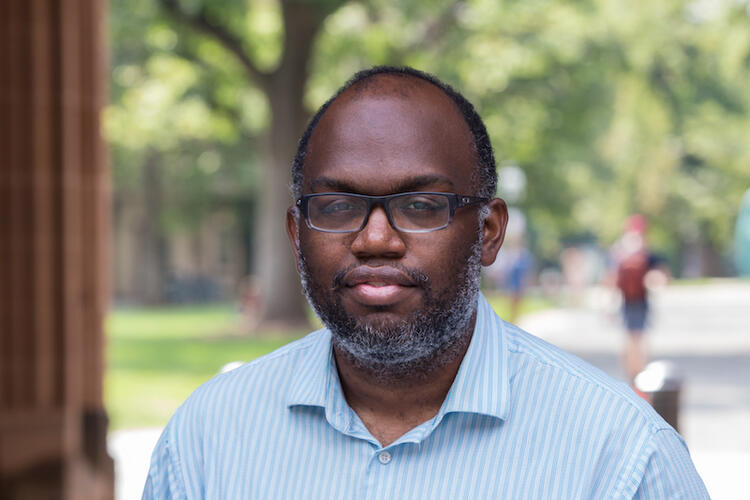 Associate Professor of classics at Princeton University Dan-el Padilla Peralta speaks to the UCSB community about classicism. Courtesy of Princeton

The series analyzes how Rosales’ work connects Greek and Yoruba mythologies to study Black literary and art classicism as an Afro-diasporic movement across the “Black Atlantic,” a term used to describe the fusion of Black cultures with others across the Atlantic during the African diaspora.

Peralta defined the study of Black classicism as “an examination of the work to which the classical tradition has been put in Africa and the African diaspora.” According to Peralta, the study stems from the appropriation of classics by colonizers and slave-owners as a form of racism and imperialism.

In one of the passages, Hudes describes the context behind some of her plays that feature the Orishas, spiritual entities within the Yoruba religion of West Africa, and the rituals portrayed in certain scenes of her works. Peralta examined a passage where Hudes opposes the idea of “magical realism” — a concept that blends fantasy with reality — being used as a label for her work.

“One play had mostly conventional scenes that I interrupted midway for intentionally awkward ‘rituals’ — sensual, silent moments. In these rituals, an actor moved her body in embarrassing ways when words became inefficient,” Peralta read from the passage. “‘Magical realism,’ a dramaturg said. ‘Your Greek and Roman gods,’ my classmates said … The comparison annoyed me. Sensual is different than magical.”

Hudes’ work was often compared to Greek mythologies, and she sought to claim her work as her own instead of an expression of Greco-Roman classicism, Peralta said.

“The Orisha are alive and pulsing. They are here now, whereas the Greek and Roman gods exist as possessions of the past,” he said.

Peralta questioned Hudes’ argument, asking if Yoruba and Greco-Roman mythologies should only be considered separate from one another or if there was a way to connect the two and  introduce “Black classicism” as such an opportunity.

He then reintroduced Harmonia Rosales’ paintings as expressions of Black classicism and analyzed them in the context of Afro-Atlantic communities, defining the Atlantic as the space where multiple classics were formed and distributed.

“There is the historical fact that the classical legacies of ancient Greece and Rome have been appropriated by modern European cultures as dominant, as they are hegemonic and have been used to buttress civilizational and racial hierarchies, thus making those classical legacies complicit in justifying racial violence,” Peralta explained.

Peralta asserted that these dominating forms of white classicisms present a threat to the classicisms of other cultures throughout the Black Atlantic by setting a standard for what defines classicism to fit that of the Greco-Roman mythologies.

“Hegemonic modes of white-century classicisms have got to go, otherwise it will continue to threaten the cultivation and elevation of other classicisms, mainly because they will hog cognitive and material resources,” he said. “The systematic denial of capital and infrastructure for the expression of Black classicism unless it conforms to fairly straight-jacketing ideas of what constitutes the classical is one of the more conspicuous [threats to Black classicism].”

To elaborate on his argument, Peralta turned to the work of Haitian-American anthropologist Michel-Rolph Trouillot, who depicted Bwa Kayiman, the first act of rebellion by the enslaved Africans in Saint-Domingue, leading up to the Haitian Revolution and the name for the revolution led by the people of Saint-Domingue against French colonizing forces.

Peralta read from Trouillot’s book, “Stirring the Pot of Haitian History,” which analyzed how the people of Saint-Domingue viewed the killing of a pig at Bwa Kayiman.

Trouillot writes that the people of Saint-Domingue called the ceremony a political gathering of a Vodou organization. To the rebels, the ceremony represented solidarity, trust and secrecy.

“That ceremony means: all initiates stand strong together, all initiates believe in one another, and all initiates would rather die than speak the secret,” Peralta read. “What happened was political, but it wasn’t only political. In any case, it wasn’t the same type of politics known to most European people … It was a Vodou ceremony that was simultaneously the most important political oath [the rebels] could mutually take before they decided to turn Saint-Domingue upside down.”

Peralta said that Trouillot’s book and its translation were intended as “reparative moves in a landscape of knowledge production about the Caribbean that to this day remains dominated by predominantly white academics.”

Peralta then introduced the concept of “white spaciality,” quoting an essay by Eunsong Kim and Maya Isabella Mackrandilal called, “The Whitney Biennial for Angry Women” which addresses the power systems of white-dominated spaces and the challenges they bring to decolonizing Afro-diasporic works.

“[White spaciality] has multiple faces. We’ll call one white supremacy, the belief in the universal, a pure idea arrived at by a series of white men who have combed through culture and curated its worth. Another face we’ll call visual oppression. We’ll call it passive. We’ll call it presence without provocation. We’ll call it just enough black faces to assuage liberal guilt without the discomfort of challenging anything. We’ll call it the fantasy of post-racial America. We’ll call it visible invisibility,” Peralta read.

He related back to one of his visits to the Spencer Museum of Art, where he found their exhibitions lacking in diversity.

“The exhibition as a whole was not exactly conducive to a congratulatory or even so much as an affirmative disposition. For one, I found it unsettling that even in the company of my undeniably well-meaning hosts on the visit to the Spencer Museum, references to the exhibition were laced with what I can only call the, ‘Look at us, we’re inclusive’ ethic of relationality,” he said.

In relation to Harmonia Rosales’ paintings in her exhibition at UCSB’s Art, Architecture and & Design (AD&A) Museum, titled “Entwined” — as she combines representations from both ancient Greek and Yoruba mythologies — Peralta said the metaphor of entwining fabrics between the two cultures in conversation with each other represents the colonial and colonized.

“The centering of fabric and textile as a cornerstone visual motif of Rosales’ paintings … holds out the prospect of an economy of exchange in which the distribution of adornment and access to adornment is understood as deeply rooted in the cultural histories of the Black Atlantic,” he said. “Can we imagine a world where instead of Indigeonous and Black labor and suffering being transmitted into the clock that graced Renaissance Baroque and enlightenment shoulders, Black and Brown bodies were securely and lusciously draped in that cloth?”

The transportation of slaves across the Middle Passage introduced different cultural and religious practices to the Atlantic, according to Peralta. He discussed how slavery may have influenced religion and how experiences in slavery became the foundation for enslaved women’s religious cultures, forming a “triple consciousness,” an awareness of their positions as women, slaves and caretakers.

He examines the concept of triple consciousness through Rosales’ painting, “Migration of the Gods.” He identifies the layers of consciousness through the animate human and nonhuman entities in the painting — the animate presence of water as something with a will of its own and the historical consciousness of the human beings migrating alongside their gods. Peralta notes how Rosales portrays time in her art as a representation of classicism.

“[The painting] is an exemplification of classicism — not just classicism in the sense of value, but classicism as a technology for manipulating time because even as it comments on the pasts of the Middle Passage, the painting kinetically propels the past of that passage into a future,” Peralta said.

The Myth, Religion and Race lecture series will continue on Feb. 24 with an online lecture by Elizabeth Pérez titled “Decolonizing the Orishas: Harmonia Rosales & the Un-Whitewashing of Black Atlantic Divinity.” The lecture series accompanies Rosales’ exhibit in the AD&A Museum.