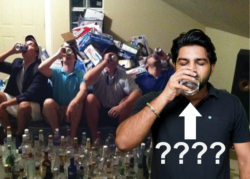 In a drunken stumble through the aftermath of a wild dayger, UC Santa Barbara student and Sigma Figma Ligma fraternity member ingested the contents of a plastic bottle which was reported to be plain water. The student has chosen to remain anonymous at this vulnerable time.

“No because I literally saw him,” an eyewitness remarked. “To be real, I had no idea we even had water here. The tap water here tastes like straight booty cheeks, so we all just brush our teeth with a bottle of Jack like Kesha told us to.”

As a result of this, rumors have been circulating through Isla Vista, YikYak and your mom’s house regarding the courageous act and its implication for the future of recreational alcoholism. While some students have been spotted sporting jugs of so-called “plain, virgin borg,” others have reacted less affirmatively. An official statement from ΣFL representative Jackson Daniels was released Monday:

“We have heard your concerns regarding this issue. As the Vice President of Health and Safety of Sigma Figma Ligma, I take your concerns personally and commit to addressing the discomfort that this scenario has caused. The situation is being investigated, and the suspected perpetrator has been placed on temporary suspension. He’s still paying his dues, though. We’re throwing our annual Beach Babes Boogaloo rager next week, and Dustin promised we’d mob Costco for some handles.”

Since the Obama-era educational nutrition policy spearheaded by Former First Lady Michelle Obama, UCSB students have been recommended by the United States Department of Agriculture to maintain a steady blood alcohol level of at least 0.10%. Students who fall too far below this threshold are urged to make an appointment with Student Health for immediate medical attention and a BuzzBallz® Biggies Tequila ’Rita, chargeable to one’s BARC balance.

A final decision has yet to be made regarding the fate of the anonymous brother, but it has been alleged that he will be transferred immediately to Brigham Young University of Provo, Utah to let him think about what he has done.

“It’ll be sad to see him go, but at least he can start soaking in his new lifestyle,” Daniels concluded.

Alison Schwartz is really in the mood for some shredded cheese.