The Daily Nexus
Simply Stated
Simply Stated: Why Don’t Humans Just Screw Themselves?
February 14, 2022 at 9:13 am by Devanshi Tomar

The Science and Tech section is excited to debut our new column: Simply Stated! Dedicated to the weird and wonderful science of everyday things and the world around us, Simply Stated features no-nonsense explanations of technology, medicine, natural phenomena and any other assortment of subjects which may spark one’s curiosity.

The need to mate, love and — to a certain extent — complicate things are all parts of the human condition. These needs have been summated to a fixation on sex and romance in storybooks, song lyrics, TV shows and movies. Even in academia, extensive research has been conducted on the neurochemical basis of love, psychosexual development (though it pains me to classify Freud as an academic) and genetic connections to sexuality. 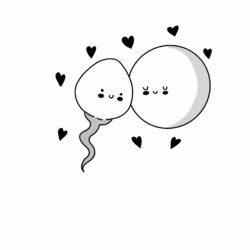 To avoid confusion, we must separately define the terms “sex” and “sexual reproduction,” though both comprise of what it takes to prolong our species. “Sex” is intercourse, often a way to express affection or attraction — though in this modern age, sometimes it’s just intercourse. Now, “sexual reproduction” is the combination of genetic information given by two members of the opposite sex, belonging to one species. In the case of humans, members of the male sex produce sperm that is to be met by the egg, which is created by the female sex.

But, to even get to the point of this meeting between the two gametes, quite the journey is required. There is courting to be conducted, texting etiquette to be had, the laws of attraction to be applied. There is the consideration of whether or not either party wants that meeting to happen at all. For as long as humans have been having sex, we have formed and built upon a piece of knowledge and a set of rituals around the concept, one that has caused the act of sex to become more and more abstract, and less about the act itself.

And that’s only how complicated sex has become. Sexual reproduction requires even more things to go right in order to be successful. To compare, asexual reproduction, the process by which cells divide mitotically, is a more time-efficient way by which many lower organisms produce offspring. While a human can take several months to produce just one offspring, many forms of bacteria can reproduce by the hundreds in a mere couple of hours. No Tinder profile, Caesarean section or other venereal mires required.

Through meiosis, the process that underlies sexual reproduction, the gametes must form in their respective bodies, then the member of the male sex must transfer their gamete into the female body. These gametes must fuse, and for a time period that is usually nine months, a human baby is, hopefully, formed from that single fusion of two gametes. It is a beautiful thing, surely, but with so much that could go wrong, one wonders: what benefits does this form of reproduction confer?

Enter the microevolutionary Red Queen hypothesis, proposed by UC Berkeley biologist Graham Bell. This model suggests that sex has evolved to give us a fighting chance against parasites. Hostile parasites evolve quite rapidly, and so human evolution’s response to this is the production of offspring that, generation by generation, possesses more and more favorable genes that can outcompete or outsmart parasites.

Unlike asexual reproduction, which creates exact copies of the parent organism with only the occasional mutation, sexual reproduction creates organisms with a completely unique set of genes that parasites, which have lived hundreds of lifetimes and evolved significantly since the point you were even born, haven’t been selected to invade before.

If we are only to give half of our genes to our offspring, the other half must be just as good, if not better than our own. Attraction exists for this reason — we are biologically predisposed to value specific traits in an individual, such as strength, energy and good health, that indicate the possession of good, successful genes. Pleasure also exists for this reason — if sex was not pleasurable, what motive would there be to pass on genes? Where can there be human progress if there is no self-gratification?

Sexual attraction and attachment are often seen as intertwined, but according to UC Santa Barbara anthropology professor Steven Gaulin, they’ve evolved for separate reasons. Attachment between two partners is the evolutionary result of the need for parental care for human infants, for whom a significant amount of development occurs outside the womb, necessitating further care that is more manageably divided among two people. On a biochemical level, our genes have evolved to produce neuropeptides that contribute to pair-bonding behavior such as monogamy.

I know, I know, leave it to a writer from the Science & Tech section to deromanticize romance as much as possible. But, although I am a scientist, I assure you that I am also a romantic. And I’ve never doubted that the forces of nature do leave room for the soul.

E.O. Wilson, an American biologist, wrote in his novel, “Sociobiology: The New Synthesis,” that “[i]n a sense, human genes have surrendered their primacy in human evolution to an entirely new non-biological or super-organic agent, culture.”

At the end of the day, we are bipedal organ baskets, yes, but the sheer size and advancement of our brains have allowed us the ability of self-awareness, the ability to define and the ability to redefine. Evolution is the study of how our environment has produced the diversity of life, including us, up to this point.

As incidental as the existence of our consciousnesses may seem, I find it glorious that our species has evolved and our genes have amalgamated into a form that can allow the individual to find our own reasons for why we love and why we exist, though to love and exist may be the same thing.