The Daily Nexus
News
“An Instrument of Hope”: New I.V. Houseless Shelter to be Renamed after Renowned Local Humanitarian and Priest Father Jon-Stephen Hedges
February 9, 2022 at 8:13 pm by Atmika Iyer

When a white Volkswagen Beetle used to drive into local emergencies, victims of catastrophe and first responders felt hope in the midst of disaster: Father Jon-Stephen Hedges had arrived. 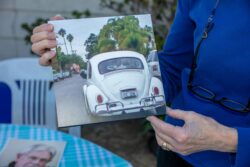 Father Jon was a local priest at the St. Athanasius Orthodox Church known for his humanitarian efforts, running towards natural disasters — such as Hurricane Katrina, the Thomas Fire and the 2014 Isla Vista tragedy — as well as helping first responders and those impacted by disasters in tending to the wounded and working alongside them

His service of the community extended beyond disaster relief, however. From 2016 to 2020, Father Jon served on the Isla Vista Community Services District Board of Directors as a founding member, focusing on providing support to I.V.’s houseless community. 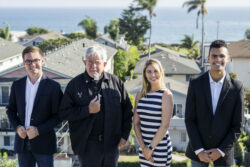 Father Jon is standing with his fellow IVCSD members. Courtesy of IVCSD

Father Jon’s humanitarian work with those experiencing houselessness included a variety of projects, like when he helped convert the Pescadero Lofts into a space for houseless residents.

“My advocacy for them probably comes from, to a certain extent, the loss of one of my uncles who came back after World War II and ended up homeless, because he couldn’t quite get back on track after [a] horrible combat experience,” Hedges said in a previous article with Nexus in 2015. “He ended up dying on the streets himself while I was a young man. I watched what happened to him, and right from that point I knew that we had to do better.”

Melissa Hedges, Father Jon’s wife, met Father Jon when she was 17 years old. The two got married a year later and remained married for over 50 years. 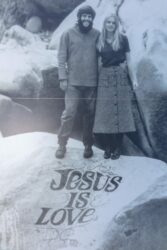 “He was a priest to the unchurched,” she said. “These people could, no matter who they were, they could be his dear friend. No matter what kind of trouble they were in.”

Father Jon began engaging in humanitarian work in 2001, hoping to apply the principles of helping those experiencing houselessness in disaster zones.

“He realized that when he was helping people on the street that were without houses, houseless, homeless — that when you get into a disaster, that’s the same situation,” Melissa Hedges said. “Everybody in disasters is suddenly without a house, right? And so he said, ‘The things that we’re doing here and learning here, we should be able to do that in a disaster.’”

“He was gone all the time. But I was used to that, because he had these exciting, important things that he needed to do, and I always had a dog and a cat, keeping me company,” Melissa Hedges said. “I’m kind of in an odd spot right now because he’s gone. But isn’t he gonna walk in through the door, right? Like he always has?”

“My heart doesn’t understand what’s happened. So, to have them name the building after him … I mean, time marches on and memories fade … but the fact that they’re going to name [the houseless shelter] Hedges House of Hope, and [hope is] really what he would bring to people, like Dr. Prystowsky.”

Dr. Jason Prystowsky — a former UC Santa Barbara adjunct faculty member and a local emergency physician — worked with Father Jon at Doctors Without Walls, a local humanitarian medical volunteer group that responds to “disasters both acute, such as 9-11 and Hurricane Katrina, and chronic, such as poverty and homelessness,” according to their website.

“One of the great honors of my life has been to serve our community during crisis, turbulence, and celebration alongside my friend Father Jon Stephen Hedges. We walked the homeless camps along the railroad tracks providing free medical care to the discarded and destitute, I as a doctor, and Father Jon as an instrument of hope,” Prystowsky wrote in a letter to the Board of Supervisors.

Through Doctors Without Walls, the pair responded to mudslides, fires, shootings and other catastrophes together.

“I had a stethoscope, he had a sheriff’s badge, clergy collar, water shoes with dark socks, and a truly ugly satchel over his shoulder filled with mysterious ‘supplies.’ I tended to people’s feet and teeth, he tended to their souls,” Prystowsky wrote.

Father Jon kept blue binders with written accounts, articles and emails from every disaster he ever responded to. Alongside those written accounts were the photos and names of those who had died during each disaster. No matter how much time had passed, he never forgot their faces or their names.

Melissa Hedges and Prystowsky both recalled how Father Jon would always be there in the aftermath of disaster not just to support the victims, but for the first responders who witnessed the horrors of the incident.

“And after the victims of disaster had their bones reset and splinted and their bleeding  gashes tended to, Father Jon reminded us all that now the real work begins, as we turn our attention to the warriors, healers, first responders, and public servants who bared the traumatic burden of keeping our community safe during crisis,” Prystowsky wrote.

Prystowsky said that Father Jon always remembered to take care of “[their] people.”

“He said ‘Jason, we are sheepdogs, and we take care of our people.’ Who is ‘our people?’ . . .  [Cops] cops, firefighters, paramedics, EMTs, social workers, doctors, nurses, community organizers, mental health professionals, teachers, active military, veterans, anyone who has pledged to make the world better and safer tomorrow than they found it today,” Prystowsky wrote. “Our people were often left in the isolated darkness of our own mind after witnessing unthinkable horror, and Father Jon consistently checked in on each and everyone of us to remind us that we are never alone.”

Father Jon later found himself at the crossroads of church and state, being a local priest and also helping to create and later partake in IVCSD. Father Jon officially coined the term, “No more about us without us” — the old slogan of the CSD.

IVCSD General Manager Jonathan Abboud said in an interview that Father Jon brought a morals and ethics-based perspective to IVCSD Board of Directors discussions, as well as a robust knowledge of I.V.’s history. 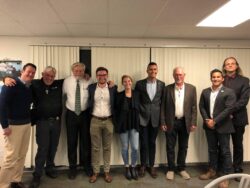 “He brought a lot of ethics and morals into the discussion of the right thing to do and he also brought history. Like when we started the compost collective, he just spoke really strongly about I.V.’s history of wanting to have a closed loop food system, which is what we’re working toward,” Abboud said.

According to Abboud, Father Jon was such a well-respected member of the community that if he were to support a cause, there would be more backing and support simply because of his reputation.

“He was someone who was like a glue. He knew a lot of the different players and people liked him. Everyone respected him. I would say that everyone really had a lot of respect for him,” Abboud said. “If he got behind something or if he was working on something, it had validation.”

As the pandemic upended the world, Father Jon took a year off, and stayed at home with Melissa.

“We spent his last year — we didn’t know it was his last year — here at the house. So I got him for a year at home, which I wasn’t used to. I was used to him always being gone,” Melissa Hedges said. “To us, it was very special.”

In early 2021, Father Jon was taken to the hospital with concerns that he might have contracted COVID-19. Though he tested negative, a liver biopsy revealed that Father Jon had amyloidosis of the liver.

“He was there for two weeks. And so we could talk to him on the phone but we couldn’t see him and I never thought I’d be losing him,” Melissa Hedges said. “Then the hospital called and they said, ‘You need to get down here. We’re not letting anybody in, but you and your son and daughter need to get here.’”

Melissa and her two children, Benjamin and Sarah, drove to the hospital to pick up their husband and father. Melissa said that she remembered that all three of them felt peaceful when they were driving.

“We each felt really peaceful. And we didn’t talk to each other but it was kind of like, am I losing my mind? You know, we’re about to lose him. Why am I feeling peaceful?” Melissa Hedges said. “That’s what the doctors and the nurses said. Everyone who worked with him said that he just made everybody feel peaceful.”

The family then brought Father Jon out of the hospital, and visitors poured in to see the man they knew as their priest, disaster volunteer, local politician and friend.

“He just said he was ready to go. He said, ‘I feel OK about this. I’m OK.’ But I just was really grateful how peaceful our kids felt, and I felt,” Melissa Hedges said. “And then everybody who visited with him, all the people who worked with him who were upset that they were losing him and he was like, ‘It’s OK.’ So anyway, that’s a nice memory.”

On the day Father Jon died, Abboud gathered gifts from his colleagues at the CSD when he got a call from Father Jon’s daughter, Sarah.

“I was actually on my way, with a card and things from CSD to see him when I got the call from his daughter that he passed away. Like I was … ” Abboud said, searching for words. “I was actually packing things up and putting them in my car to take to him when we found out.”

Almost a year after his passing, the Board of Supervisors voted to rename I.V.’s houseless shelter to Hedges House of Hope. Those who knew him remembered how Father Jon would always be wearing his black clergy wear and a necklace with a cross, but even more than his classic style, they remembered what Father Jon brought with him everywhere he went: hope.

The white Volkswagen Beetle may not be driving from catastrophe to catastrophe any longer. However, just as Father Jon remembered the names and faces of lives lost in a catastrophe, his memory and work will be remembered through Hedges House of Hope. 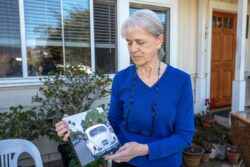 Melissa hedges is holding a photo of Father Jon driving away in his Volkswagen Beetle. Sherwin Shi / Daily Nexus