After losing their first three conference matchups, the UC Santa Barbara men’s basketball team was able to beat the Cal State Northridge Matadors by a score of 72-45. However, the Gauchos dropped their next game to the Hawai’i Rainbow Warriors. UCSB now sits in 9th place in the Big West Conference with a conference record of 1-4. 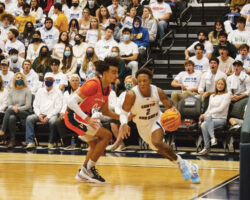 UCSB got a much-needed win against CSUN after starting 0-3 in the Big West; the worst record in the conference at the time. Not only was it the Gauchos’ first conference victory, but it was also the first road win of their season. Senior forward Miles Norris dominated the Matadors the entire night, as he scored a career-high 31 points and had an extremely efficient 10-of-12 night of shooting.

The Gauchos jumped out to an early lead by starting the game on a 10-0 run. However, as the first half progressed, CSUN was able to claw back. When the buzzer signaling halftime sounded, the Gauchos only held a 2-point lead. This blown lead can be attributed to UCSB’s turnovers, missed free throws and fouls at the end of the half.

In the second half, UCSB looked like an entirely new team. Even while only up by 2 at the half, UCSB was still able to win by almost 30 points; the Gauchos outscored CSUN 38-13. Norris continued his dominance in the half and, at one point, hit 4 straight 3-pointers. In the half, CSUN was held to only 20% shooting, as UCSB cruised to victory.

Senior center Amadou Sow was the second-highest scorer for the Gauchos with a total of 17 points. No other player for UCSB scored more than 7 points. The leading scorer for the Matadors was senior guard Elijah Hardy who scored 13 points.

In the next game, UCSB fell to Hawai’i by a score of 65-62. This time, it was freshman guard Ajay Mitchell who led the Gauchos in scoring by racking up 16 points. Sow acquired his second double-double of the year with a 13-point and 13-rebound game.

In the first half, it looked as if the Gauchos were going to win their second game in a row. UCSB began the game on a 13-2 run and, at one point, was up 23-4. This was the largest lead for either team in the game. Before the half ended, Hawai’i was able to get consistent defensive stops and cut the lead down to 11 points.

The Gauchos had no momentum left in the second half. Hawai’i continued their defensive intensity and was finally able to take the lead with just over 8 minutes left. Hawai’i shot 7-of-10 from three. With the victory, Hawai’i remains undefeated in Big West play and holds first place in the conference.

UCSB’s next matchup will be against the UC Irvine Anteaters this Thursday as the Gauchos look to get their second conference win of the season. UCSB’s previous matchup against UC Irvine was canceled due to COVID-19.