The Daily Nexus
The Daily Stench
Chancellor Yang’s Flop Era Lowkey Serving? The Student Body Weighs In
February 8, 2022 at 4:20 am by Miss Informed 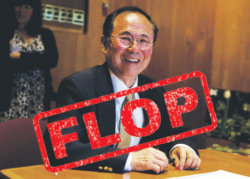 As tensions surrounding the return to online classes reach a breaking point, our favorite fancy chancy, Daddy Yang himself, is losing popularity faster than you can say “flop era.” Although the forgiving nature of the populace may be wearing thin due to the onslaught of new COVID-19 cases and Chancellor Yang’s lack of communication, could it be that he makes it through this dark time by relying on sheer swag and drip? Our journalists at Nexustentialism interviewed a wide variety of students to weigh in on whether Yang is a massive flop, or if he deserves some top!

“Well to be quite fair, he’s caught a lot of heat since the initial backlash against Munger Hall; I’m surprised that he was able to make it out alive,” said third-year philosophy major June Ferrera while thoughtfully twirling her pencil. “Especially now with Zoom University being on the horizon again, I’m starting to worry that he may be eaten whole by the angry masses. But let me tell you, even if he’s quitting, his ass sure ain’t! That man is built like a fucking Kardashian.” Ferrera concluded that while Yang may be in his flop era, he and his gigantic badonkadonk are, indeed, lowkey serving.

Even the staff are thirsty for a tall glass of Yang, and it’s pretty fair to say that Yang is quenching our collective thirst with his unrivaled drip. “At the last assembly meeting, Yang pulled up in an all-black Rick Owens ensemble paired with ‘those Balenciagas, the ones that look like socks,’ as Cardi B would describe them,” one anonymous staff assembly member whispered to us, visibly sweating.

“He had his Miu Miu shades on the whole time and would not stop adjusting his big black puffer jacket. Let’s just say that it’s pretty clear where all of our students’ tuition is going … and it’s not towards housing.” The assembly member then scurried away like a bilge rat caught on the captain’s deck, but not without acknowledging that Yang is, admittedly, lowkey serving.

When asked if Yang is a massive flop or deserves some top, chemistry TA Brady Matthews scoffs. “Flop? Are you fucking kidding? He was at the last mountain rave DJing a killer set. Say what you will about the guy but you can’t deny that he’s a beast,” Matthews wiped a bit of spittle off the side of his mouth. “I also saw him smoking out some Pi Phi girls in the Davidson stairwell; he’s insane. Yang Gang 4LYFE!”

Well, there you have it folks. Our bourgeois father of fathers, Chancellor Yang, may be bleeding approval ratings but is still going strong with his chin held high and his waist on thinner. The next time you see his head, it may be in a collection bucket at the end of a guillotine but you can bet your ass that he’ll still be serving face!

Miss Informed apologizes sincerely for sexualizing our beloved icon, Chancellor Yang, and wishes him the best of luck when the student body inevitably decides to eat the rich.