The UC Student Association held its annual Students of Color Conference — “The Future is Ours: Leadership in The Age of Crisis” — virtually from Jan. 29-30.

The Students of Color Conference (SoCC) is the UC Student Association’s (UCSA) largest and oldest conference — held every year since 1988 — and provides a space for students of color “to strategize around statewide and campus-based actions,” according to the UCSA website. 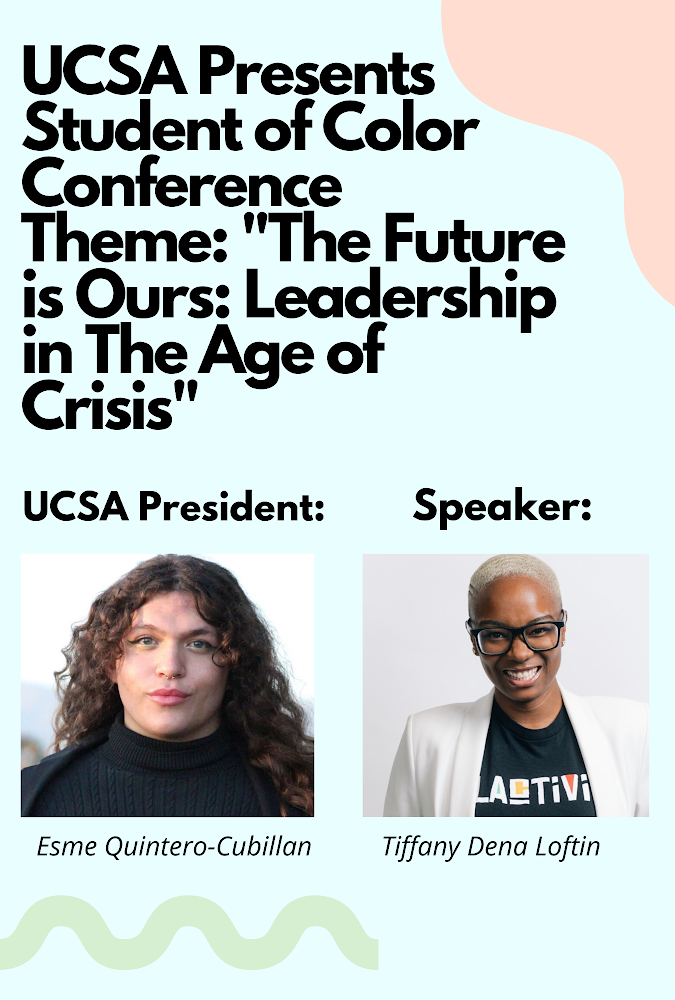 UCSA President and UCSB External Vice President of Statewide Affairs Esme Quintero-Cubillan, fifth-year political science and sociology double major at UC Santa Barbara, said they hoped for students of color to feel more connected and have a sense of solidarity. In addition, they said that this year’s conference reflected UCSA’s aims to constantly learn and evolve, as well as offering an avenue for the organization to remedy its past actions with SoCC.

Quintero-Cubillan explained that SoCC has been accused of anti-Blackness and anti-Indigeneity, and this year there was an intentional effort to remedy the harm that previous SoCCs have caused to students of color.

“This is my first year in UC Student Association, and it just also happens to be the year that I am president, and that means that I have to — whether or not I am responsible — acknowledge the harm that this organization has caused in years past, especially with SoCC,” they said.

“We are constantly trying to amend the harms that we have caused in the past and [show] that we are capable of representing students of color thoughtfully, considerably and with a deep amount of care and a deep amount of love,” they continued.

Learning from past mistakes, Quintero-Cubillan said that UCSA incorporated an intentional effort to provide spaces for students who felt overwhelmed or were triggered by the subject matter.

“This year, there was an intentional effort of making sure that there were spaces that if students were overwhelmed, they could escape to and handle their trigger and handle their hurt, and really be able to process it in a space that isn’t overwhelming.”

Quintero-Cubillan opened the conference — held via Zoom due to COVID-19 concerns — with a presidential address to the audience, welcoming everyone and explaining the mission and importance of both SoCC and the conference.

Quintero-Cubillan’s speech was followed by keynote speaker Tiffany Dena Loftin, the national director of the National Association for the Advancement of Colored People (NAACP)’s Youth & College Division. Loftin was also a UCSA and UC alumna and has been heavily involved in organizing around racialized issues.

“There are three things that I want you all to take away from this conversation,” Loftin said during the event. “The first thing is the relationships of power, the second one is building our power and the third one is accomplishing our power.”

Quintero-Cubillan shared their experience of attending the “Collection Liberation” workshop during Session A, emphasizing that, as an activist, they must constantly learn about what their work entails.

“I acknowledge that I also have to continually work on what it means for me to be in an activist space,” they said when talking about why they attended the “Collection Liberation” workshop. “I never want to approach my work and my care for my community without constantly relearning what it means to be in solidarity with other movements.”

They also attended “Navigating Carceral Environments: Experiences of Foster Youth of Color” workshop, explaining that their personal ties to the issue make them want to continue to research the topic beyond their undergraduate education.

Quintero-Cubillan said that they believe this year’s SoCC was one of the most successful thus far and emphasized the importance of UCSA’s role in shaping the journey for students interested in student activism and student government.